Pine Bluff Country Club is the place to experience a posh meal in an intimate setting filled with Southern charm. With his savory and sweet kitchen creations, Chef James McAfee has been satisfying the palates of members and guests for many years at the 100-plus-year old establishment.

I’ve had the pleasure to experience the deliciously wholesome meals offered at the Pine Bluff Country Club on past visits with my grandparents and family. After a recent experience during which Chef McAfee spoiled us, I have a new appreciation for this underrated dining spot. I felt like I was dining at an upscale urban restaurant. A quick glance outside with towering pine trees and groomed greens reminded me I was close to home.

The menu offers something for everyone but definitely with Cajun and Creole influences. McAfee was a dear friend of the late celebrity Chef Paul Prudhomme. They met in New Orleans and became fast friends. Prudhomme would frequent Pine Bluff to visit McAfee and foster other friendships he had established in the area. The two chefs worked more than 10 special events together through the years.

McAfee brings three culinary degrees and years of kitchen experience to the Pine Bluff Country Club. He grew up in McGehee, Ark., learning the culinary trade from his father, who worked for the Peabody Association in the late 1950s into the ’60s as a traveling chef. As a family life was established, he settled into the country club business in McGehee. As the years passed, young McAfee would do more prep work in the kitchen for his dad. His first meal to master was creamed gravy and hamburgers.

Originally McAfee went to culinary school with aspirations of becoming a pastry chef. He would soon realize he enjoyed being more in “the heat of the kitchen,” so he turned his focus on main courses. He still enjoys the intricate process of creating pastry treats, and at home, he especially likes preparing homemade pasta. Once a week, he teaches future chefs at Pulaski Technical College Culinary Arts and Hospitality Management Institute.

Teaching helps keep him “on his toes” and his mind fresh, he said. “Anytime you cook and don’t learn something, then you’ve closed your mind. It’s always important to keep an open mind and always be encouraging for younger chefs, and even learn from them.”

The Pine Bluff Country Club offers a dining option where you can feel at home and have high-end food. “It is a second home for most folks,” McAfee said. “It’s their dining room, and we offer them everything from great home-cooking to four- and five-star dining at their request. And they can feed the kids at the same time.”

McAfee established the a la carte menu a few years ago because he had so many requests for certain items, he said. Now, diners can choose exactly the meal they want. The great thing about working at the country club, he noted, is learning people’s likes and dislikes. “I love when people say, ‘Just tell Chef to send me something.’”

Crowd favorites include the peanut butter pie and peppermint pie, to which we can attest. But first we’ll start at the beginning.

McAfee treated us to a five-course meal, starting with tuna tartare. The infusion of sauces – mustard, wasabi and sweet teriyaki – were delectable. Our second appetizer, shrimp and crab remoulade, was topped with a fried green tomato. The lump crabmeat and shrimp were accompanied by a spicy aioli sauce and perfectly ripened avocado. 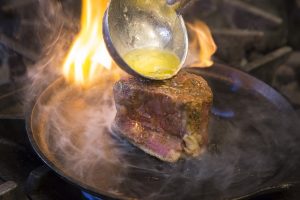 The fillet prepared by McAfee is a real treat. It’s melt-in-your mouth good. 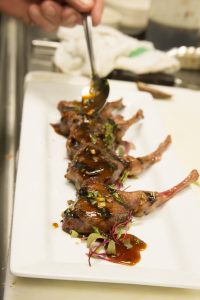 Tender and juicy, the grilled lamb chops are complimented nicely with savory sauces.

The grilled duck was to die for. Tender and juicy, it was complemented nicely with watermelon cucumber salad and blackberry barbecue sauce. Following that rich treat was farm-raised beef tenderloin. This melt-in-your-mouth course was paired with truffled julienned potatoes.

Now to the famous peppermint pie. What’s not to love about ice cream with a crunchy, chocolate crust? It was like swallowing all of your best childhood memories in one bite.

About 90 percent of food prepared at the club is farm fresh, McAfee said. That buying philosophy is in line with his community-minded outlook. “I really enjoy raising money for charities,” McAfee said. “In Pine Bluff, we’ve helped secure more than $6 million for charities in this area.” The club is a prime spot for organizations to host events.

Every other June, McAfee takes his philanthropic spirit outside of Arkansas to join other chefs from around the world in Cleveland to raise funds for University Hospitals Seidman Cancer Center. “Fifty-five restaurants come from around the world for Five-Star Sensation,” he said. The event was led by celebrity chef Wolfgang Puck for nearly 25 years. It was the first of its kind outside of Los Angeles and has grown to be one of the top benefits in the Midwest, according to a news release.

McAfee gives credit to his staff for his success. Most have been at the club his entire 14-year tenure. His son, Jay McAfee, is one of two who has left. He is now an executive chef and instructor at Pulaski Tech’s culinary institute. James McAfee said he couldn’t do anything without his wife, Laurie McAfee, who is banquet director at the club. Brandon Harris is his sous chef at night and Marjorie Pitts is second in command during the day, when the home-style buffet is offered.

To see McAfee and his staff at work, private parties may be arranged in the club’s demonstration kitchen. Popular months for this up-close culinary experience run from October through March. Reservations can be made by calling the club at 870.535.0132.

McAfee has the talent to work in a larger, more urban market, but he said, smiling, “I like being a big fish in a small pond.” And nothing compares to the repeat customers he serves day in and day out. “I love what I do and don’t look at it as work. It’s so gratifying to see smiles on people’s faces as they enjoy a meal together.”

As he gazed outdoors, he noted he also prefers a golf course versus city lights for an outside view.

An Arkansas Brewery is Back in Bentonville and Better Than Ever
May 28, 2020

Closing Out the Taco Bucket List: Heather Baker and DJ Williams Head to Tacos 4 Life
May 27, 2020
Go to Top
Never Miss An Issue!