Glaucoma has been called the “silent thief of sight” because it impairs peripheral vision first and, therefore, often goes unnoticed.

[pullquote]People of African-American, Hispanic or Asian descent are at higher risk. They have a six to eight times higher chance of developing glaucoma.[/pullquote] [dropcap]Compounding[/dropcap] the problem is that though the disease is hereditary, families seldom discuss it, so those at high risk may not be aware, said Thomas Brunner, president and CEO of the Glaucoma Research Foundation.

January is Glaucoma Awareness Month and a great time to discuss family history of the disease with loved ones.

“We don’t typically notice peripheral vision loss,” Brunner said. “We have two eyes, and we can turn our heads and compensate. You can lose as much as 40 or 50 percent of your vision and not notice. Glaucoma is different from macular degeneration, which affects your central vision: You wake up in the morning, and the newspaper is fuzzy. There’s nothing like that for glaucoma. There’s no pain — you just don’t notice.”

Glaucoma can refer to a group of eye diseases, but it is generally caused by damage to the optic nerve, which is responsible for relaying images from the eye to the brain.

Glaucoma primarily affects middle-aged and elderly populations, and roughly 1 in 100 people have it, Brunner said. Of those ages 80 and older, 1 in 10 have glaucoma, and it accounts for 9 to 12 percent of all cases of blindness in the United States. People of African-American, Hispanic or Asian descent are at higher risk. They have a six to eight times higher chance of developing glaucoma and may want to get screened more frequently, according to Brunner. 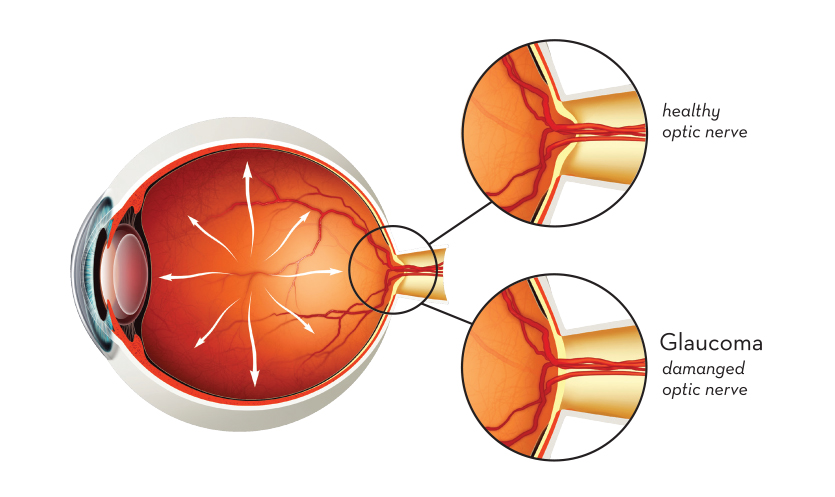 “Many of the glaucoma aspects are inherited. It doesn’t mean people will get glaucoma because it runs in their family, it only means they’re at a higher risk than others,” he said. “Glaucoma is something people can keep well-hidden, and, oftentimes, nobody knows they are at risk for the disease.”

Screenings for glaucoma can be done during a general eye exam, and Brunner recommends getting a complete eye exam at ages 20 and 30, and having your eyes checked every one to three years from ages 40 to 54. Around age 65, screenings should become annual.

“By age 40 or so, everyone should have a complete eye exam, which is a very careful exam with a dilated pupil, so doctors can look at the back of the eye and the optic nerve,” he said.

Screenings include the air puff test many people are familiar with, but that’s only one of five tests that reveal signs of glaucoma. Doctors also check the visual field, the optic nerve and the thickness of the cornea.

Sometimes eye trauma from sports or other activities can lead to glaucoma, and the effects are not always immediate.
“That is one of the risk factors, a blow to the eye — especially in sports — and it’s a good reason to wear eye protection,” he said. “Sometimes glaucoma related to eye trauma might not show up until years later,” highlighting the importance of regular eye exams.

In elderly populations, the loss of peripheral vision can lead to falls or missing hazards while driving.

“[For instance, an individual may fall because] he didn’t see a curb because the lower part of his vision is gone,” he said. “There’s actually data that shows hip injuries in older people are related to glaucoma.”

And once that vision is gone, it’s permanent, which makes early detection and treatment so vital. Treatment usually consists of daily eye drops, which control pressure in the eye and mitigate damage to the optic nerve.

“The key is working with your doctor and using eye drops regularly, and most people will never lose vision,” Brunner said. “Unfortunately some do get worse no matter what. They are the individuals we’d like to help, and why we fund research to better understand glaucoma and find new treatments. Someday we’d like to cure this disease.”

For more information on glaucoma and its treatment and prevention, log on to glaucoma.org.