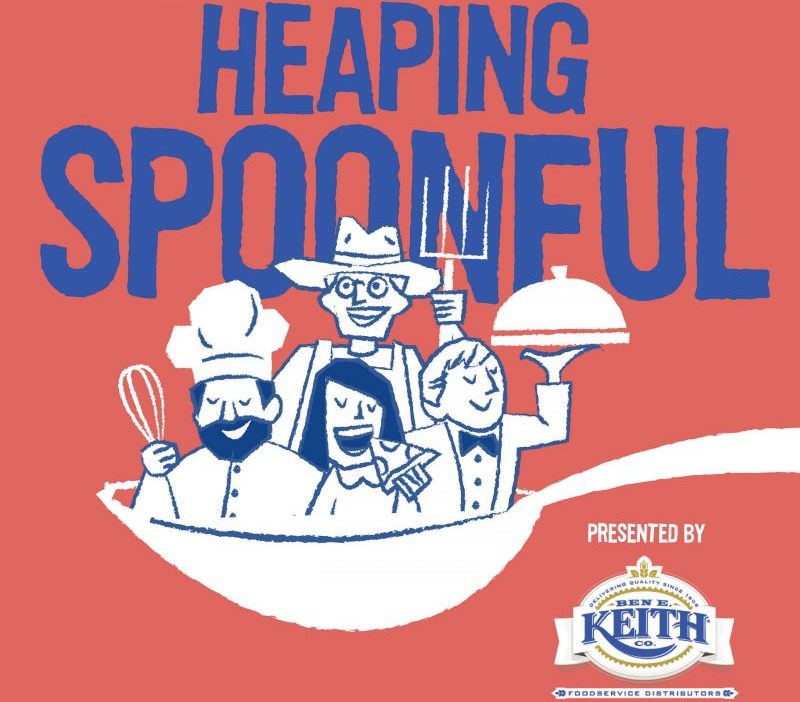 Ben E. Keith is a pretty familiar name in Arkansas, especially if you work in or know someone who is involved in the local food industry. Over the years, the food and beverage distribution company has sponsored songwriting festivals in Hot Springs and has been generally supportive of the evolving food scene culture in Arkansas as its grown and become more complex and sophisticated. Since Sept. 2019, Ben E. Keith Mid-South has been the proud sponsor of “Heaping Spoonful” a bi-monthly podcast conversation with restaurant owners, chefs, and farmers who have contributed to the legendary eateries that make up the diverse Arkansas food scene.

More than 60 episodes in, “Heaping Spoonful” has traversed nearly the entire state, interviewing familiar names in the Arkansas culinary scene as well as others from around the South who have had an impact on the state’s current food map. The podcast is hosted by mid-south food aficionado, former Arkansas newspaper man and Museum of Discovery CEO Kelley Bass was kind enough to share some of his experience with hosting the show and answer a few questions for us here at AY.

“I’ve been friends for almost 40 years with Rusty Mathis, the general manager of Ben E. Keith Mid-South Division,” said Bass. “The podcast, and the name, were all Rusty’s brainchild, and he hired me to manage the podcasts for Ben E. Keith. We’ve done a few: The Mighty Rib (Kevin Shalin); Phil Brandon (Rock Town Distillery) and Alan Leveritt (Arkansas Times), who aren’t Ben E. Keith customers, but for the most part we focus on restaurants/chefs who are.”

AY: Among the 60+ podcasts you’ve done since September of 2019, are there any particular interviews that stand out as among your favorites?

Bass: I really enjoyed visiting with everyone featured, but a few that stick out: Karen Carrier, who owns several restaurants in Memphis, with the Beauty Shop as the flagship. Her history in catering in New York and providing food for Stray Cats and Clash video shoots made fascinating stories, and I really appreciate her commitment to having restaurants that really look good besides serving great food. Another one I loved was John Currence, a James Beard Award winning chef who has four renowned places in Oxford Mississippi, including City Grocery. He also founded Big Bad Breakfast, which now has expanded and just opened in Little Rock. Perhaps the single best story I’ve heard — and I’m sure he’s told it hundreds of times — was from Paul Holt of the 4-Dice Restaurant in Fordyce, where Rolling Stones guitarist Keith Richards stopped for a meal in 1975 before being busted by the local cops.

AY: Are there other podcasts that you’d recommend for listeners who love food and/or southern culture?

Bass: Rex Nelson’s Southern Fried blog is fascinating, and Rex has been doing it since 2009, a long time by podcast standards. He is perhaps the No. 1 Arkansas restaurant/food culture historian and expert in the state, though Kat Robinson has really come on strong in more recent years.

AY: If you could travel back in time and interview anyone from the past who has impacted the Arkansas food scene, who would it be?

Bass: Bruce Anderson of Cajun’s Wharf fame. He had small-town restaurant experience, but to envision something as colossally large and ambitious as Cajun’s Wharf really took vision, guts and courage. Arkansas had never seen anything like it, and it was undoubtedly THE “go to” place for business travelers coming to Little Rock. I was a local but found myself there often, from before my junior prom (1976) to “beat the clock” happy hours in the 1980s to so many nights of great music. Fresh oysters prepared so many ways and a commitment to quality and variety in all that seafood was nothing close to the norm for Little Rock in the 1970s and ’80s. After the Landry’s chain ruined the place it was so great to see Mary Beth Ringgold and her team buy it back and restore it to its glory before the old building wore out, competition stiffened and the market just wouldn’t bear a place that huge.

AY: I know you said earlier that you went out on the road for your most recent interviews up in Eureka Springs, so is there a region of our great state that you’re most excited about when it comes to food? On the other hand, is there a part of the state where you wish to see more happening in terms of the local food scene?

Bass:You really can’t beat Eureka Springs for great restaurants per capita, and there’s a lot going on that’s great in Hot Springs. And just think how many really good restaurants there are in a single, pretty small neighborhood: Little Rock’s Riverdale has Loca Luna, Red Door, the Fold, Pizza Cafe, Buffalo Grill, Maddie’s Place, Faded Rose (40-plus years and going strong!) and even the Town Pump. That’s pretty incredible. The restaurant scene in the SOMA region of downtown Little Rock continues to grow and get more interesting. I think the Park Hill neighborhood of North Little Rock still has room for growth in terms of numbers of attractive dining options.

Be sure to listen and enjoy “Heaping Spoonful” each month as they scour the state in their effort to research and document the rich culinary makeup of Arkansas cuisine.