Heart Health: The Beat Goes On

Josh Seubold never saw it coming. And frankly, he had little reason to. The 36-year-old chiropractor from Van Buren never had any cardiac problems growing up and years of checkups never offered any hint about what was to come.
“Every physical I ever had was perfect, I had great blood pressure,” he says. “I wouldn’t say I was an all-world athlete, but I played sports my whole life. [Heart problems] really would have been the last thing on my mind.”
In fact, Seubold had just finished working out last April when he felt an unusual burning, straining sensation, largely on the left side of his throat. The next day he walked into a clinic and two months later he was on an operating table to repair an aneurysm of the ascending aorta, an enlargement in the body’s primary pipeline for circulating blood.
“There’s a bit of a shock mentality,” he says. “I couldn’t believe it because I hadn’t had any other kind of issues. Even though [cardiology] is not really my area, I knew enough about it to know how bad that can be. I’d be lying if I said I wasn’t scared.”
It’s no headline that heart disease is the major health-care issue of our time; the specter of heart attack, stroke and a dizzying array of genetic-based issues has hovered over the American landscape for generations. Billions of dollars have been raised and spent on research and public information campaigns, and while much has been accomplished, the foe is formidable.
“Our goal is to save lives,” says Joyce Taylor, executive director of the American Heart Association (AHA) in Little Rock. “We’re charting well on reducing death, but we’re not improving the health of all Americans at the level that we want to be.”
According to the AHA, cardiovascular disease annually accounts for more than 800,000 deaths in the U.S., or 1 in 3 Americans. Another 92 million adults in the U.S. live with some form of cardiovascular disease of the aftereffects of a stroke.
Heart disease alone, meaning coronary heart disease, hypertension and stroke, is responsible for 790,000 of the annual toll, easily topping all causes of death in the U.S. The AHA works to provide public education on risk factors and prevention, as well as advocacy to help bring about legislation that assists in these efforts.
The drumbeat AHA hammers out for proper diet, exercise, managing cholesterol and not smoking is familiar, but one that’s still not heard by an alarming number of people.
“What we do at the American Heart Association is always around education awareness, outreach,” Taylor says. “There’s a common understanding, obviously, that heart disease affects people, but people aren’t aware of the risks to them. They don’t know it’s the number one killer of Americans, they don’t understand and know their numbers.
“That’s what we’re asking of people: to know their numbers and know how they can build plans around even small steps to make changes.” 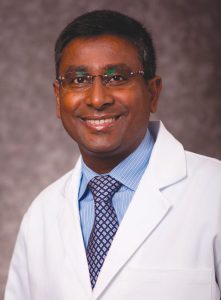 On one wall, a large fountain lends a soothing, gurgling soundtrack to the waiting area at CHI St. Vincent Heart Clinic Arkansas in west Little Rock. It’s a pedestrian weekday morning, but there are few empty chairs here. When it comes to heart disease in Arkansas, there’s no shortage of patients in every size, shape and color.
“In the big picture of things, [Arkansas is] in the fourth quartile in terms of overall heart health,” says heart surgeon Raj Chakka, M.D. “In general health-care stats, we’re lagging behind. Unfortunately, the deep South – Arkansas, Louisiana, Mississippi – has always been in the lower quartile.”
Like its companion states, the issue of heart disease is particularly thorny in Arkansas, where straightforward rules about risk and prevention are complicated by factors of race, education and economics.
“Education level, awareness, culture and family patterns are crucial,” says Chakka. “On top of all of this, cost is a big deal because we’re a relatively poor state. If you buy fresh food and cook at home, it takes not just the money but the time. If someone is a single mom, or two parents working and busy, they may not have much time to come home to prepare dinner. Sometimes on the way home they may grab something that may or may not be as healthy.”
The positive effects of healthy diet and regular exercise can be staggering, says Chakka, even when adopted as an adult and despite genetics or years of bad eating and sedentary living.
“The disease process can start with plaque in the artery, even as a child. A lot of it is related to genetics, diet, obesity, not having exercise or multiple factors,” he explains. “What we do, however, has an impact in reversing that. There are studies showing somebody has a documented disease – for example, plaque in their arteries – you put them on a healthy program of diet and exercise and repeat the studies and there is a regression or a reversal of the disease. It’s not a one-way street.”
The title of the American Heart Association’s initiative is catchy – Healthy for Good – and so are its four pillars, recited in rote manner by staffers and volunteers alike.
“Eat smart, add color, move more, be well,” says Scot Davis, chairman of the 2018 Heart Walk.
A standout event on the AHA calendar, the Heart Walk hosts about 3,000 walkers and raises over $300,000 in Arkansas. Davis brings experience to his role – he’s previously chaired the Heart Walk in Jonesboro – and it doesn’t surprise one to discover that for him, like many of the walkers themselves, the cause is personal.
“Heart disease runs in my family: My mother passed away at 69; I had a brother pass away at 50, both from heart disease,” he says. “We talk a lot at the American Heart Association about why we do the things that we do, you know, ‘What’s your why?’ That’s my why.”
There’s no entry fee for the Heart Walk; walkers can just show up and stroll their choice of three distances – one, two or four miles. On the list of things that people can do to improve their heart health, walking is an easy one, says Davis.
“Something simple as walking 30 minutes a day makes a big difference,” he says. “As a society, we sit on our couches and watch TV too much. This is something almost anyone can do to move more.”
Fundraising comes from the many corporate teams that participate, a lot of whom also partner with the AHA as part of corporate wellness programs, putting Healthy for Good into practice through work.
“Some companies have AHA as a part of their programs, everything from a lunch and learn to us doing CPR training,” says Holly Heer, corporate marketing director for the Heart Walk. “We have a blood pressure program called Check, Change, Control and we organize that within companies as well.”
This year’s Heart Walk will be held the morning of April 28, at the North Shore Riverwalk Park in North Little Rock. 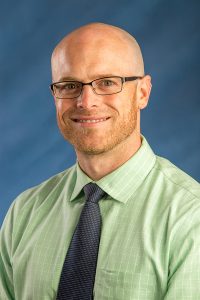 Of course, not all heart maladies fall into the categories of heart attack and stroke; many conditions are the result of genetics. Here too, the AHA’s work plays a significant role by funding the kind of research – $562,000 worth last year alone.
Josh Daily, M.D., a pediatric cardiologist with Arkansas Children’s Hospital and UAMS in Little Rock, sees the payoff from this investment every day working with the smallest and youngest heart patients.
“There are some types of acquired heart disease in children in which their heart is born without an underlying defect and then, either due to an exposure or possibly a genetic predisposition in combination with an exposure, they develop heart disease,” he says. “But the vast majority of heart disease in children is congenital in nature, meaning it’s something they are born with.”
The current state of medical advancements boggles the mind – infants receiving heart transplants and doctors patching up holes in toddlers’ pumping chambers, for instance – providing tangible proof of the strides made in just the past few decades.
“Fifty or 60 years ago, the majority of babies born with critical congenital heart disease died in infancy or childhood,” Daily says. “With the development of the heart-lung bypass machine and advances in surgery, we’ve now reached a point where the vast majority of babies born with congenital heart disease live into adulthood.”
Daily says available medical technology and expertise transcend even the reparative value of today’s procedures.
“Within the last 10 to 20 years, there has been a shift in focus away from mortality to quality of life and morbidity,” he explains. “Many of the patients who have undergone palliative procedures may be living into adulthood, but their quality of life may be poor.
“Advancements now involve not so much development of a new technology or new intervention but small, incremental changes in the interventions that we already have,” he adds. “In total, that can make a big difference with regard to someone’s long-term outcome, especially in quality of life.”
Josh Seubold missed a month of work after his surgery, during which time his younger brother Jonathan, 34, fell off a ladder helping a buddy. While being treated for those injuries, it was discovered, incredibly, that Jonathan had the same condition as his older brother. He underwent the same operation to repair it in September and both are now doing fine. Josh is back to work full-time and doing most of what he did before, although he has consciously cut out
some of the more weight-intensive activities he did prior to the operation.
The experience has left Josh appreciative of the medical expertise that Arkansas has to offer and in particular his surgeon, Frederick Meadors, M.D., of CHI St. Vincent in Little Rock.
“It could have easily gone another way and I feel really grateful that the Lord took me where I was supposed to be at that time,” Josh says. “My wife and I were driving home from the initial visit [with Dr. Meadors] and she goes, ‘I kind of thought you were going to go see other surgeons.’ And I said, ‘You know, it just feels to me that this is where [God’s] taking us.’ I just feel very blessed.”