Heather Baker Talks Razorbacks with David Bazzel on The Buzz 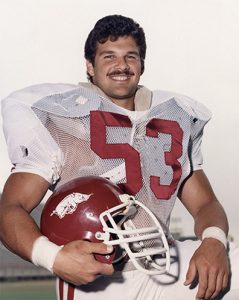 What’s the value of being an Arkansas Razorback? Quite a lot, according to the latest issue of Arkansas Money & Politics. AMP Editor Mark Carter outlines the impact that the Razorback brand has had on former players over the past several decades in his article “Land of Opportunity.”

Publisher Heather Baker recently appeared on 103.7 The Buzz with David Bazzel to talk about the Razorbacks and business. The new article, she says, is “about the Land of Opportunity, and what being a Razorback means to you after leaving your football, baseball or basketball” career,” she said.

The first example she brought up during the interview was none other than Bazzel himself. As a 16-year-old high school senior from Florida, Bazzel made the decision to commit to Arkansas after realizing the potential that the state offered for him.

“Reading your story and going back to when you were 16 years old, deciding to come to a state like Arkansas could impact your life forever? That’s huge,” Baker says. “Using the name of Razorback, it’s become an iconic platform for the state. We’re so grateful for it. You’ve done an incredible job.”

Bazzel said that he realized that the state as a whole focused so heavily on the Hogs and that would open doors up down the road. However, he said he knew that the name recognition would only go so far.

“If I could perform well and do well, this was such a unique state with so much statewide coverage and attention. If I could do well, it would certainly give me some built-in advantages doing things in the community when I left,” Bazzel says.

Baker also pointed out the success of former Razorback basketball star Joe Kleine with his Corky’s Ribs and BBQ restaurant. His case is remarkable, Baker said, because of his significant success during his professional athletic career and his subsequent decision to return to Arkansas.

“This is somebody who left the state after being amazing basketball player: played for the Chicago Bulls, won championships, played in the Olympics, [won a] gold medal, and then came back to Arkansas because of his roots here and because of what being a Razorback means. It’s flourished for him, of course,” Baker says.

As Harris noted in the AMP article, “My being a Razorback removed my identity of culture. I wasn’t black; I was a Razorback. That’s how people saw me.”

While the brand recognition of being a Razorback can make a difference, there’s still hard work and sweat involved, according to Baker. “By all means, don’t think that just because you’re a Razorback that you’re going to be successful. You obviously have to work, but it definitely opens doors for you,” she says.

READ THE FULL ARTICLE: The Land of Opportunity