This past weekend I realized it was definitely time for a girl’s trip, so my daughter Savvy and I decided we were going to jump in the convertible and cruise on to Branson, Missouri!

We stayed at the Hilton Branson Convention Center Hotel, which was spectacular. The hotel is right in the heart of Branson Landing, so it was convenient and close to everything we wanted to do. While we were there, the valet was just so funny. He saw my car and started giving me all these car facts, and what he didn’t know is that I’m actually the original car girl! So I knew everything he was telling me. Everyone at the hotel was super nice! They use Lysol products there so everything was sealed off and felt very clean. We felt very protected and safe. The rooms were just beautiful. They overlooked the Branson Landing, which has a spectacular water and light show at night that’s actually designed by the same person that developed the Bellagio Lights in Las Vegas.

We love to jam-pack things into our schedule. We first went to Snowflex Park, which is part of Wolfe Mountain. It is a tubing experience where you carry a tube to the top of a hill—you can either hike it yourself or use a conveyor belt to get up there – it’s up to you—and then you hold on and they spin you. There’s a water glaze that goes over the mountain so it looks like you’re tubing down a snow hill. It’s always such a fun time. 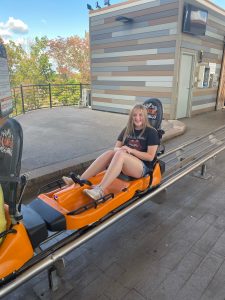 One of my other favorite things to do is the Branson Coaster. Savvy and I did this more than anything else on our trip. The Branson Coaster is an individualized coaster. If you have little kids, you can even bring them on too. You control your speed, but you’re in an individual coaster and they set you off. You feel like you’re flying through the woods on this ride, and it’s so neat! The ride lasts a good six or seven minutes. You also have brakes, so you can control how fast you go. I like to go fast, though, so I didn’t hit my brakes once. It has a totally different feel from day to night, too, and they sell day passes so you can ride it a bunch of times during your visit in Branson. They also have a swing that goes way up into the air and you can see all of Branson. Such a cool adventure! 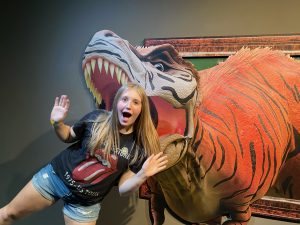 Savvy and I headed to Branson Landing after the Coaster that night and ate at Margaritaville! We were literally overlooking the light and water show as it was happening. It was just absolutely amazing. 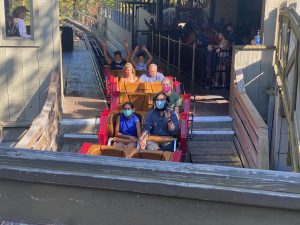 Savvy got me to go on every single roller coaster in Silver Dollar City, and we just did them over and over and over again. They have the Time Traveler roller coaster, which has been around for a few years now. We probably rode it 15 times. Silver Dollar City really has something for everyone, whether you want to shop, eat or just go on rides all day. I personally love taffy, and I always have to buy a huge thing of vanilla taffy every time I go to Silver Dollar City. They’ve always got a special themed event going on too, and right now it’s pumpkins and the Harvest Festival for Halloween, which is going on now through Oct. 31.

Also, if you haven’t gone to the Christmas show, that’s hands-down my favorite thing to do in Silver Dollar City—so put that on your calendar. That event, which is called An Old Time Christmas, begins Nov. 7 and continues until Dec. 30. 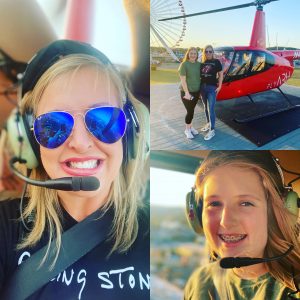 That night, we went to the Branson helicopter and flew all over the city. They took us over the Landing, over the Strip, over the dam, and back to Silver Dollar City. That was such a fun experience to have, and so different from what we normally do. The helicopter rides offer shorter, more affordable trips and longer trips that are nearly an hour.

Stay tuned for part two of my Branson experience next Friday!