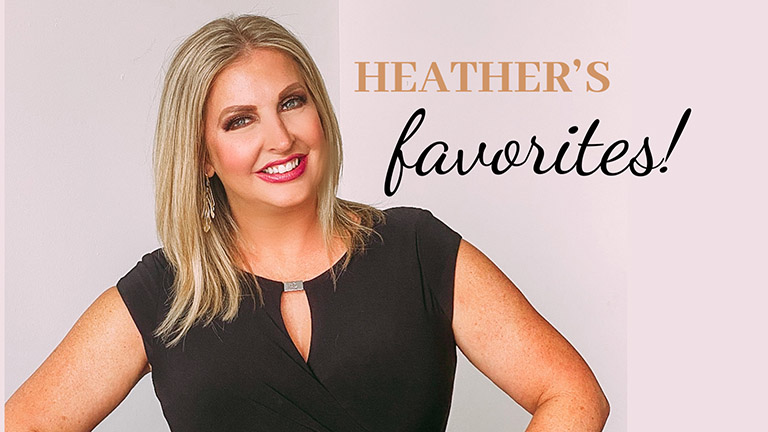 During the second half of our fun-filled weekend in Branson, Savvy and I visited Beyond the Lens! and its Flyride experience for the first time, and that was one of my favorite new adventures in the city. You definitely want to dress cute when you visit Beyond the Lens, because it is all about posing! It’s perfect for today’s person that wants to get a photo for Instagram. 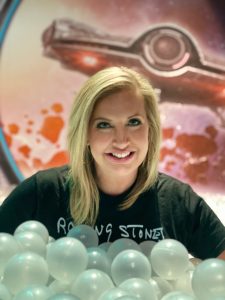 They have all these different things to do at Beyond the Lens! For example, I love Bigfoot, and I have this fascination with Bigfoot. They have a huge automated computer where you enter where you live and it tells you where there have been Bigfoot sightings near your home! Then, when you walk around the corner, they have a huge Bigfoot and facts about Bigfoot. Beyond the Lens! also had a huge ball pit where you can fall back into it and take a bunch of cute pictures. They have all these setups that are designed so you can take really cool shots. 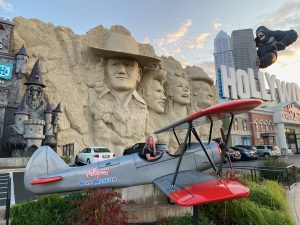 Beyond the Lens! also has an experience called Flyride that I absolutely loved. You sit in a chair that lifts you off the ground in front of a screen. There’s actually a similar ride at Epcot called Soarin’. It makes you feel like you’re flying over the pine trees and that you can even smell them. When you’re going over the ocean, you see whales swimming and water actually flies up and hits you in the face! It totally made me want to travel, it was really relaxing, and any age would like it—I could hear the kids there oohing and aahing and the older people loving the ride as well. I totally recommend trying Flyride out. 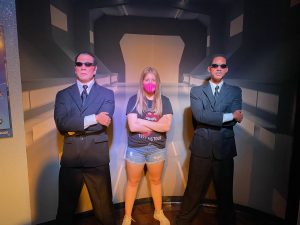 We also stopped at the Hollywood Wax Museum. We always like to stop there and see what’s new. They have props you can stage for photos, and my favorite is always the horror section because I love scary stuff. They have everything from Cameron Diaz to George Clooney to characters like Hannibal Lecter. 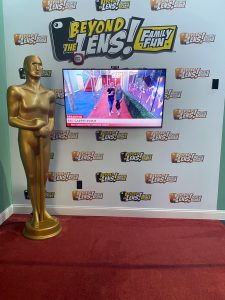 The Hollywood Wax Museum also has Shoot for the Stars Mini Golf! It was set up like a movie, and we had so much fun taking photos and golfing because of all the props. I always win at mini golf, so no one ever wants to play against me—but that was one of our favorite mini golf experiences ever. 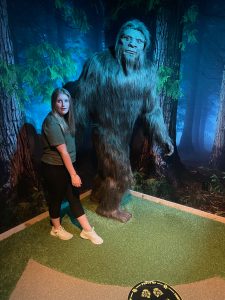 On Monday morning, we were supposed to go ziplining, but the weather was crazy so we had to change plans! We went to Wonderworks, which is a bit newer in Branson. It’s kind of got the feel of a museum with some rides in it, and it’s so much fun. I think it’s really perfect for middle-school aged kids. There are some educational parts as well. You can definitely spend a few hours there if you make the most of it—the kids will have so much fun working on the more interactive aspects of it.

Another amazing part of our trip was visiting the Titanic Museum. It is just the most incredible history to see. There’s millions and millions of dollars worth of artifacts in there. I always visit, but this visit was especially incredible. I got to have a tour with Jamie, and she’s been at the Museum for a long time. She told me in-depth stories that she learned from actually talking to people who had family members on the Titanic, or were even on the actual ship. I saw one of the life vests, and learned an incredible story about it. When people were sent to look through the wreckage and find people who didn’t make it, they had to make such a hard decision. They had to determine if the dead bodies could be identified or not, and if there were not, the people just cut the life vests off of them and buried the victims at sea. The life vest I saw was one of those artifacts, and it was just remarkable. 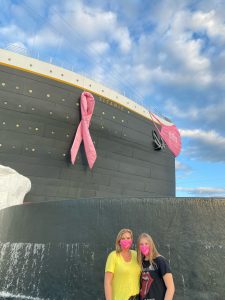 The Titanic Museum also changes what they have on display constantly. They have information on the ship from day one until now, and that includes new things that are discovered all the time. When you arrive at the Museum, too, you receive a card. You don’t know whether or not you’re a first, second or third class passenger, but you can go through the Museum and find where you would’ve slept, how you would’ve eaten, where you put your stuff. Everyone at the Museum is so kind and knowledgeable, and it’s just always something you should do while you’re in Branson. 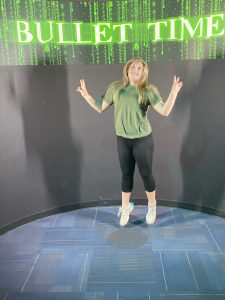 After that we just did a little bit of shopping at the Tanger Outlets. They’ve always got some good deals going on, and you can never go wrong there. 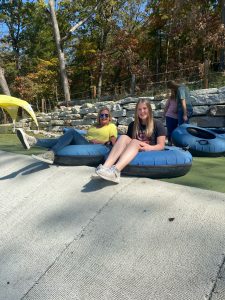 Branson is so much fun if you have a couple days to go on a trip somewhere. You could literally have a packed four or five day trip just going up and down the strip. There’s so much going on Branson, and it’s changed so much in the past ten, five, even two years!