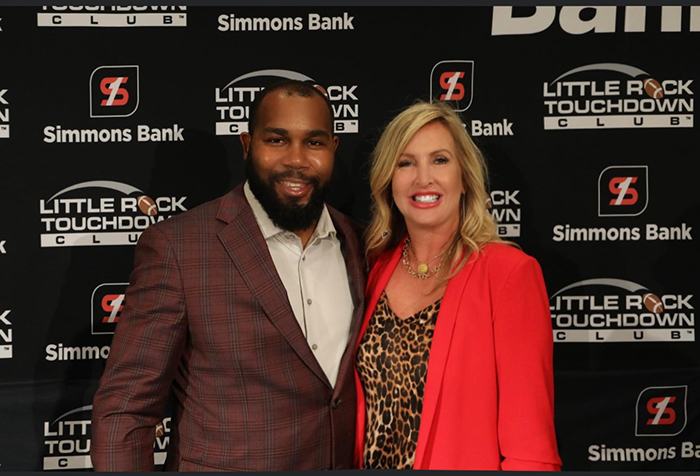 I could go on and on about all the things that make Arkansas unique — we really are a one-of-a-kind state. Amidst our fantastic restaurants, incredible artists and charming cities, we are lucky enough to have one of the largest and fastest-growing football clubs in the nation. The Little Rock Touchdown Club meets once a week through the months spanning football season with some of the most elite voices in football. While everyone is mourning the end of summer, I’m getting pumped up for what the Little Rock Touchdown Club has planned. 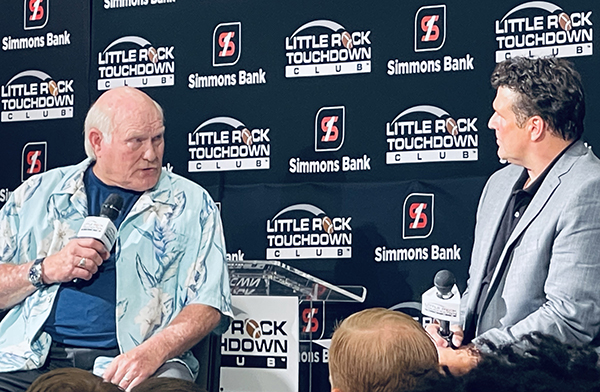 I attended the first Touchdown Club of the 2021 season with AY Account Executive Tonya Higginbotham, and to say we had a blast is an understatement. The Head Hog, Sam Pittman, kicked off the season as the first speaker. Razorback fans overflowed from the room for the man who is leading our boys to victory this fall. We called the Hogs in true Arkansan fashion, and when I say that the energy in the room was electric — there’s not a doubt in my mind that Razorback fans are some of the most passionate sports fans in the country.

My good friend David Bazzel, a radio host on 103.7 the Buzz and Razorback legend, started the Little Rock Touchdown Club back in 2004 with 17 founding members. Since then, the club has grown exponentially to include more than 500 members. We forgave David long ago for originally being from Florida, and his contributions to Arkansas football, of all levels, through the Touchdown Club prove how much he loves and supports our state. 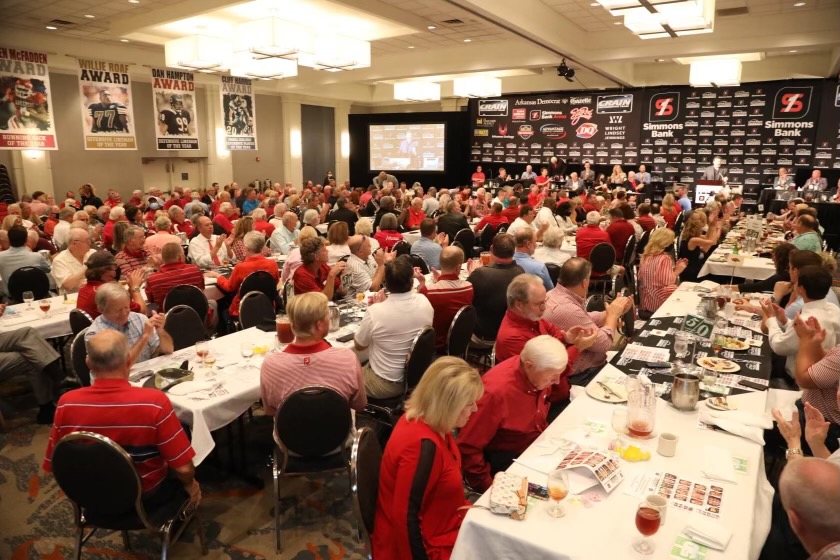 “Arkansas has a great history of football, not only as Razorbacks but high school teams, our college teams, our Division II teams and notable players,” David says. “We knew Arkansas was the right place for a football club. Our first meeting brought in 45 people, and I never could have imagined the growth our club has had to this day.”

David moved to Arkansas back in the ’80s to play football with the Razorbacks, and he’s since gone on to be inducted into the Arkansas Sports Hall of Fame, University of Arkansas Hall of Honor and countless other recognitions for his talent and his giving spirit. Arkansas is constantly overlooked in the national news for all of the moves our sports team makes, but David has made it his mission to change that and bring the spotlight to our little state with big hearts. David works tirelessly to not only make people laugh on his daily radio show, but also make people smile through his events. 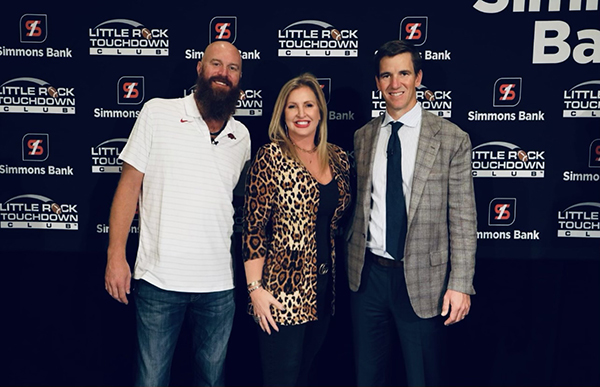 “If you’ve never been to a Touchdown Club meeting, you have to go,” he says. “The energy in the room is incredible because everyone there are football fans. Men, women, judges, attorneys — anyone can be a fan of football. The excitement in the room is unmatched.” 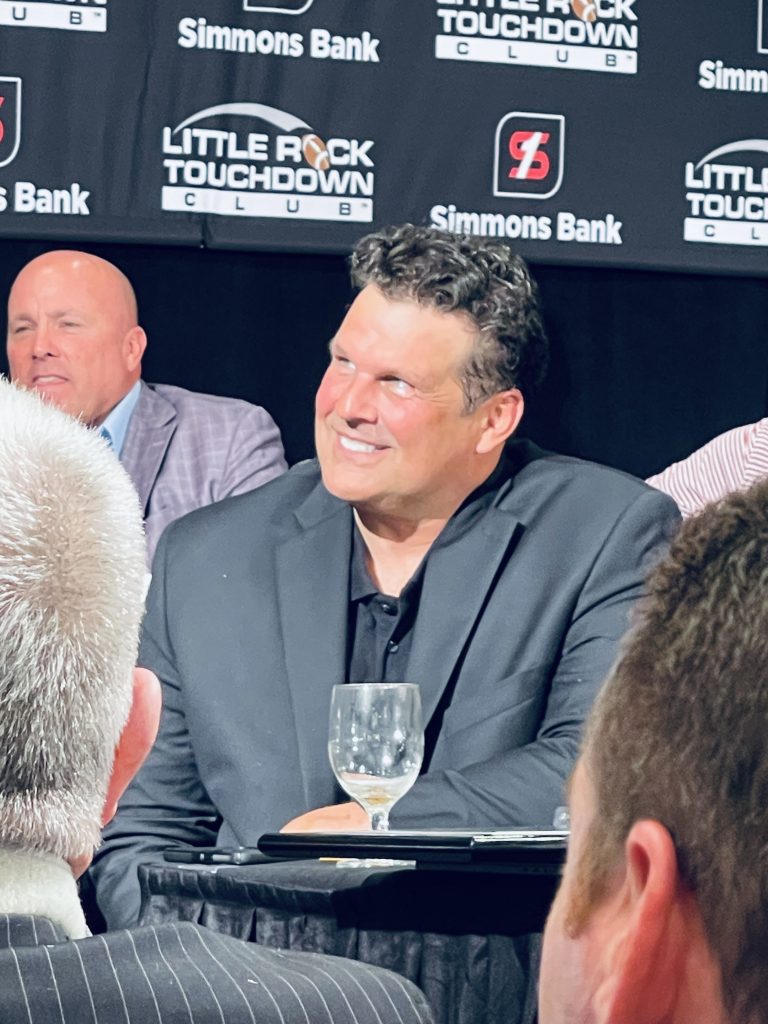 At the first Touchdown Club meeting for 2021, Rex Nelson created and bestowed a new award for David called the “Baz Award.” Anyone who meets David knows that he is humble, compassionate and has a killer smile! All that to say, the Baz Award could not be a more appropriate recognition of all that David has done. Between his day job and all the organizations he’s involved in, I don’t know how he does it. 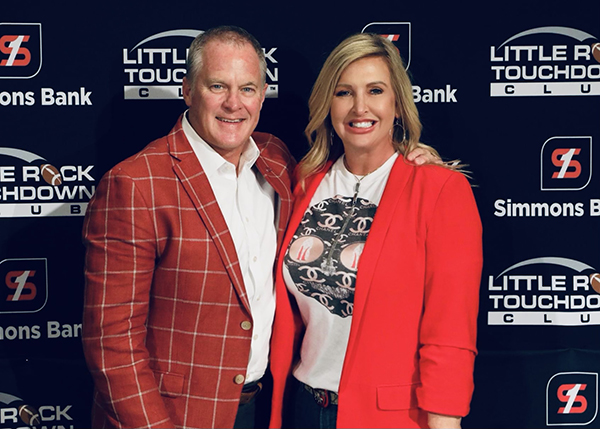 “I really enjoy connecting Arkansans with people that [Arkansans] wouldn’t normally get the opportunity to see,” he says. “We really try to bring the best speakers out to each meeting, and Terry Bradshaw for instance, a legendary player who’s been in movies and TV shows, is next up on the schedule. I just really have fun doing [the Touchdown Club], and I continue to enjoy it more and more every year.”

A little sneak peek into what David and the board members of the Club have organized for this season: Terry Bradshaw will be the guest speaker for the September 14 Touchdown Club meeting, and Darren McFadden will be attending the following week. Unfortunately, Terry Bradshaw’s meeting has been sold out, but that only means you need to be quick in purchasing your tickets for the next 10 weeks.

This is something you absolutely do not want to miss, so visit the Little Rock Touchdown Club website to learn more and book your tickets! 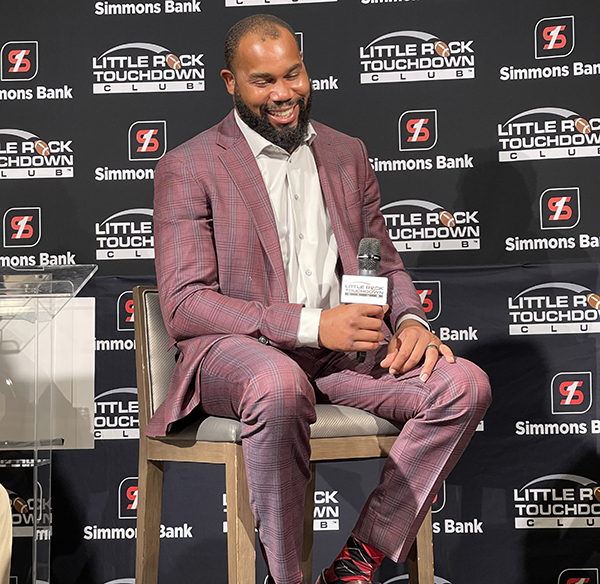 READ MORE: The Little Rock Touchdown Club Has a Packed Slate of Noteworthy Speakers for 2021