Here’s a Novel Idea: Write One! 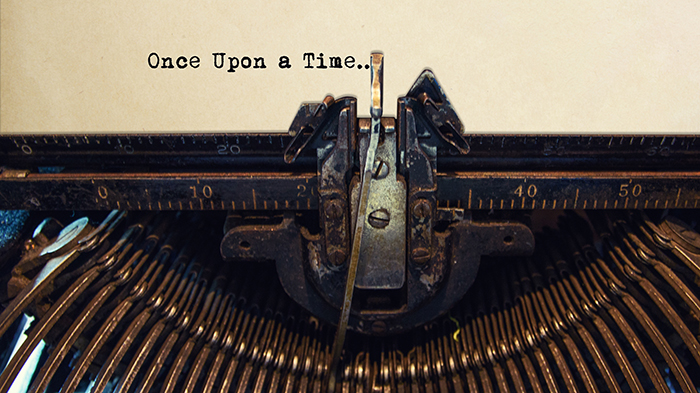 Here’s a Novel Idea: Write One!

Arkansas is home to a little over 3 million folks – many of them creative people with varied experiences, vivid imaginations and a natural urge to tell stories. It’s no wonder that the state has produced such noted novelists as John Grisham, Donald Harington, Joan Hess, Douglas Jones, Charles Portis, Eli Cranor and Grif Stockley.

Maybe you, too, have a hankering to write a book. If you set your mind to it, you can draft your own novel within the next 12 months.

While 350 words a day may appear to be an ambitious objective, it’s roughly equivalent to 1 1/2 typed pages, double-spaced. To put that in perspective, you’ve already read about 175 words in this article. Twice this much, and a day’s output is reached!

Before we go any further, let me remind you upfront that writing a novel is hard work: coming up with an intriguing story idea, choosing a point of view, developing characters, writing dialogue, pacing, maintaining conflict, establishing a sense of place . . . the list goes on and on and on. Ernest Hemingway, himself an intermittent Arkansan, wasn’t kidding when he said, “It often took me a full morning of work to write a paragraph.” 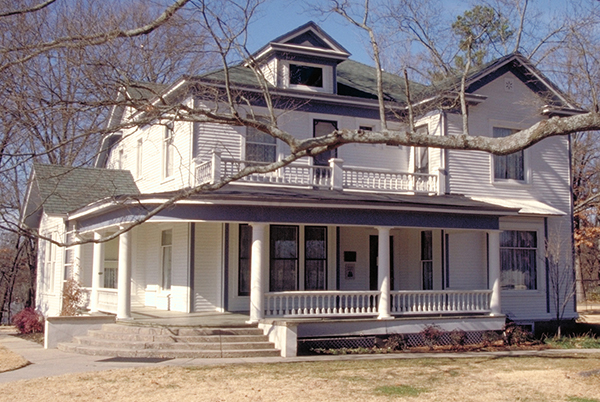 So, what are some of the basics required for one to write that single paragraph and then the hundreds to follow? A dictionary and a thesaurus will be helpful, but don’t assume that you have to own a computer and the latest word-processing program. James Patterson, who’s sold 425 million books worldwide and finds his name regularly perched high on the New York Times bestseller list, still writes longhand in pencil on legal pads.

But the best tool is an inquisitive mind, one that’s been exposed to the works of a wide range of authors: young, old, male, female, Black, white, Hispanic, current and classic. Cormac McCarthy, generally regarded as one of America’s greatest contemporary writers, offered a one-word suggestion for aspiring authors: read. By exploring the fiction of other writers, you’ll slowly discover the style most in tune with what you’d like to produce. Developing a familiarity with and an appreciation for their novels lays the foundation necessary to embark on a writing adventure of your own. 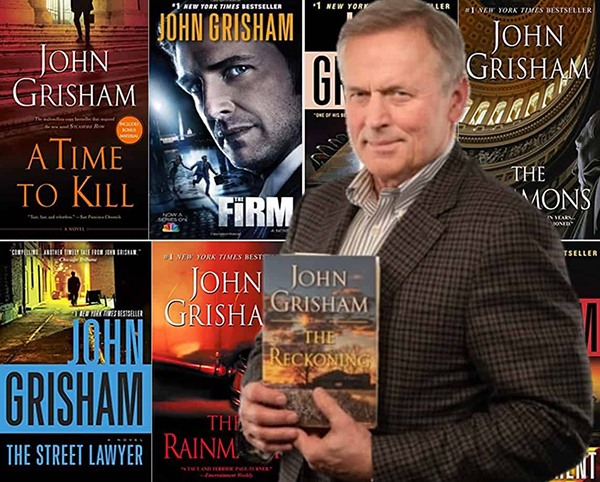 John Grisham holds his novel, The Reckoning. Grisham has authored several other novels, some of which can be seen in the graphic placed behind him.

For instance, do you enjoy the “stream of consciousness” method of William Faulkner and his long, rambling sentences? Or are you more likely to favor the lean, spare narrative technique of Hemingway? Little Rock native Donald Harington, described by Entertainment Weekly as “America’s greatest unknown writer,” mastered a unique, quirky style that served him well. Bestselling novelist Sue Grafton, creator of beloved private investigator Kinsey Millhone, captivated readers with her breezy, casual approach. Likewise, Peter Mayle developed a charming, light-hearted manner that carried through his series of whodunits even while his leading characters dealt with mobsters and other serious reprobates. Although more than a few scholars will argue that John Grisham isn’t a great writer in the technical sense (he even admits, “This isn’t serious literature”), there’s no question that this Jonesboro original is a master storyteller, having sold more than 300 million books to date.

Now, how to come up with the central idea for your novel? Maybe you recall an interesting experience or encounter from earlier in your life that, with some creativity, could be expanded into a compelling story. Say, a canoe trip down the Buffalo River or a weekend in Hot Springs. Or perhaps you have a relative or friend whose exploits could serve as the basis for the lead character in your book providing, of course, that you add enough fictitious embellishments to mask his/her true identity. Or consider using a natural disaster (flood, tornado, earthquake) to set the stage for your thriller.

If you’re wondering about a setting for your book, you have two options: using real-life locales or making up your own. In his many novels, John Grisham has incorporated both actual communities (Memphis in “The Firm” and the Delta of northeastern Arkansas in “The Painted House”) and fictious ones (Clanton, Mississippi, in “A Time to Kill”). Donald Harington invented an Ozark town (Stay More) in “The Architecture of the Arkansas Ozarks,” but it was based on Drakes Creek, a village in Madison County, where he spent much of his youth. Grif Stockley’s novels take place in Arkansas, but he created fictitious settings such as Blackwell County and Bear Creek. Farberville, in the Claire Malloy mysteries by Joan Hess, is clearly modeled on Fayetteville. Eli Cranor set his recent “Don’t Know Tough” in Denton, Arkansas, a town straight from his imagination. Fans of Charles Portis will recall how he brought Dardanelle and Fort Smith to life in his classic “True Grit,” and the same for Little Rock in “The Dog of the South.”

Before jotting down those first words, think about your point-of-view. In short, do you want the story to be told through the eyes of the main character (first person) or through a narrator (third person) who can describe what’s happening with the characters along with their thoughts and feelings? Each approach has its own advantages. Harper Lee’s “To Kill a Mockingbird” is a fine example of first-person narration, whereas J.K. Rowling’s seven-volume series of Harry Potter books use the third person.

While a number of novelists insist that an outline is absolutely necessary before sitting down to start a draft, others cringe at the very idea, preferring instead to let the characters and plot emerge as they write. But there’s no getting around the fact that at some point you must face that blank screen (or sheet of paper) and begin.

There’s a lot to be said for establishing a routine, such as writing from 7 to 10 a.m. each day. Unfortunately, that’s a luxury few of us – especially beginning authors – can expect. But it’s important to try to write a little each day, even if it’s just jotting down ideas to pursue at a later date. Some successful authors rise before the rest of the household stirs and make the most of the quiet time; others opt to tap onto their creativity over the lunch hour.

Salado native Rhona Weaver, author of “A Noble Calling” and “A Sacred Duty,” writes when she can – often from 8 p.m. until midnight – and tells me she’s “a bit of a night owl.” Sitting at her desktop computer, she envisions the scenes in her novels much like a movie unfolding, and lets her characters direct the plot. She relies on a key group of “beta readers,” five to seven individuals who critique her drafts, looking for flat characters, confusing plotlines and other inconsistencies. 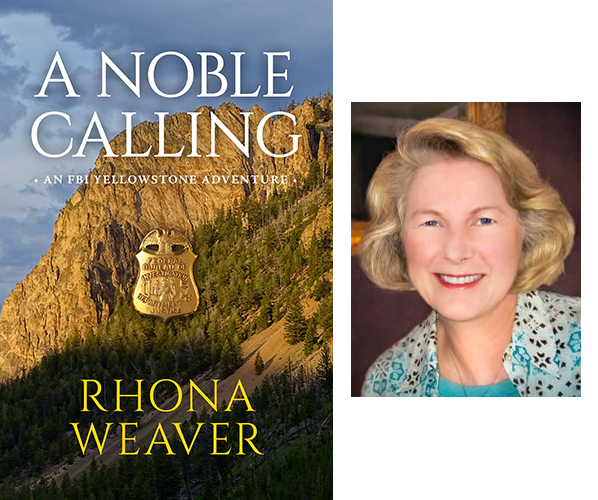 Rhona Weaver and her book A Noble Calling: an FBI Yellowstone Adventure.

Weaver has only recently become a writer, although at the age of 24, she put together a list of life goals, and No. 5 was “to write a bestselling novel.” Retiring in late 2015 after a 35-year career in agricultural land appraising, she was ready to try something different. After praying about an opportunity to become a partner in a real estate outfit, she declined the job offer and began typing. She showed the first chapter to her assistant who said, “This is what you’re supposed to do.” A year later, Weaver finished “A Noble Calling,” a book that’s been recognized as “Best First Book” by the Independent Book Publishers Association and “Best Christian Fiction” by the New Generation Indie Book Awards. It and the sequel feature character Win Tyler, an Arkansas-born FBI agent taking on challenging assignments and tough adversaries, both natural and human, in Yellowstone National Park.

Asked about advice for new writers, Weaver says, “We’re Southerners; we come from a culture of storytelling. Each and every one of us has a story. Write yours!”

During his boyhood, Richard McKeown delivered 70 newspapers every morning before going to school. That may account for his interest in getting a journalism degree from Arkansas State University in Jonesboro, and later working for several newspapers before eventually settling into a career with Central Arkansas’ advertising community. But that quest for a good story never left him, resulting in the 2021 publication of “State of Redemption,” his novel weaving political intrigue into a crime thriller. The sequel, titled “Murder by the Book,” should be available next year. 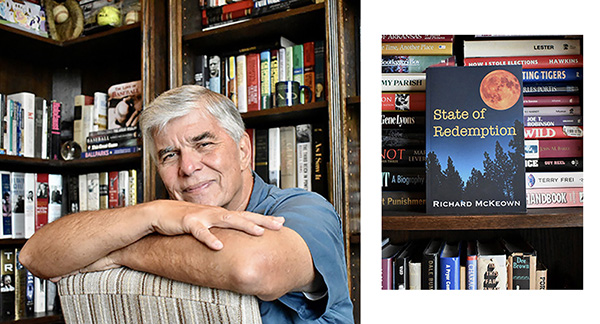 Richard McKeown and his book, State of Redemption.

With one book under his belt and another on the way, McKeown has thoughts to share with others wanting to write. “Readers are invested in your characters,” he says. “Fully develop them, and make sure they remain consistent in what they do and think.” Likewise, don’t try to include a scene or a character just because the writing is cute or clever. “If something doesn’t work,” he says, “delete it.” He ends our interview with this: “Good writers are readers.”

For those who might appreciate a short list of suggested references, here are four that I can recommend: Stephen King, “On Writing: A Memoir of the Craft”; John McPhee, “Draft No. 4: On the Writing Process”; Roger Rosenblatt, “Unless It Moves the Heart: The Craft and Art of Writing”; and Sol Stein, “Stein on Writing.”

Over the years, the South has produced an inordinate number of accomplished writers. Set your mind to it, and you could be next! But let me conclude with one of my favorite Cormac McCarthy quotes: “No sane person would ever sit down and write a novel.”

[Joe David Rice has published two novels, An Undercurrent of Murder and A Nasty Way to Die, both of which are available locally at Wordsworth or through the Amazon website. A Piece of Paradise, his third book in the trilogy, will be released soon.]