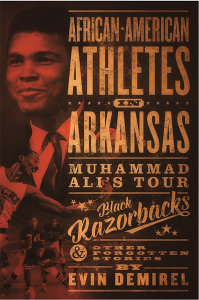 A Look at the Forgotten Corners of Arkansas History
Story by Evin Demirel
War Memorial Stadium in Little Rock has been the Razorback football team’s second home since its opening in 1948. While no African American played on the varsity Razorback football team until 1969, black fans attended Hog games in preceding years, recalls Wadie Moore, Jr., an African American whose father was a maintenance worker at War Memorial.
Moore recalls about five to ten black fans attended each Arkansas game there in the early 1960s, though white fans didn’t see them. Stadium policy allowed them to sit only under bleachers in the north end zone. Meanwhile, in Fayetteville, segregation had also influenced the seating arrangements at Donald W. Reynolds Razorback Stadium, which opened in 1938.
In the 1940s, blacks couldn’t sit in the bleachers at Razorback Stadium in Fayetteville, either. Instead, they sat in chairs on a track then encircling the field, according to Henry Childress, Sr., an African American who moved from Fort Smith to Fayetteville in 1944. Many of the black fans worked on campus or in the UA fraternity houses, so they personally knew the white players, Childress adds. He recalls one such fan — Dave Dart — as perhaps the Razorbacks’ most avid: “He’d be out there, out on the side of the field almost. He’d be just a-hollerin’ and yelling ‘Come on!’” And, soon enough, Childress found himself joining the frenzy too.
In Little Rock, Wadie Moore recalls 1965 as the first time he saw black fans in a War Memorial crowd. Little Rock native Geneva Hill, the Razorback Band’s first black member, was in town and her family came out to see her, he recalls. During these years, Moore, then a teenager, got to know sports media legends such as Jim Bailey, Bud Campbell and Jim Elders. When Moore found a passion sports-writing for Horace Mann High School’s newspaper, it was his father who made sure one of his articles got into the hands of Orville Henry, the longtime sports editor of the Arkansas Gazette.
In 1968, Moore too made history by becoming the first black sportswriter at the Gazette.
Sports historian Evin Demirel is a speaker and author of African-American Athletes in Arkansas: Muhammad Ali’s Tour, Black Razorbacks & Other Forgotten Stories. Find more info at heritageofsports.com. 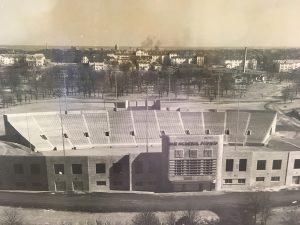 The Little Rock Touchdown Club Has a Packed Slate of Noteworthy Speakers for 2021
August 24, 2021
Go to Top
Never Miss An Issue!