For many Arkansans, state wildlife officers are the guys you call when see a wildlife violation or a poacher. Arkansas wildlife officers — whose colleagues in other states are known as game wardens or conservation officers — are state law-enforcement officers with full police authority to issue citations and make arrests while enforcing all local, state and federal laws. Their primary responsibility is to patrol assigned counties and enforce Game and Fish regulations and boating laws, but state wildlife officers are the chief stewards of wildlife and its habitat in Arkansas. And as the commission’s conservation boots-on-the-ground, their duties are more varied than ever.

Special divisions include the disaster-response team, the K-9 unit, the honor guard and the dive team. 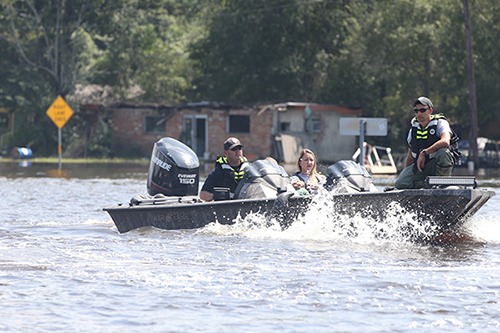 Many times, state wildlife officers are the first responders during natural disasters. The commission’s enforcement division includes a team of officers assigned for rapid deployment to catastrophes that occur in Arkansas and even neighboring states. Plus, these disaster-response team members receive specialized training in terrorism response.

For example, team members were deployed earlier this year when historic flooding compromised levees along the Arkansas River. They also were involved in search-and-rescue efforts for a Texas man, eventually found, who became lost while hiking in the Ouachita Mountains.

Multiple K-9 units are stationed across the state to assist wildlife officers in the protection of wildlife and to track violators or lost individuals. When they’re not tracking, K-9 teams spend much of their time training to maintain proficiency and conducting evidence recovery such as sniffing out firearms and hunters’ illegal stashes. They also participate in PR events at schools and festivals.

Earlier this year, a K-9 unit from AGFC won first place in the single-leash division of the Southern States Manhunt Field Trials held in Mayflower. The winning Arkansas team competed against teams representing agencies and correctional institutions from states across the South. Using Labrador retrievers exclusively, it was the only team from a conservation agency to run dog breeds outside of bloodhounds and beagles.

“We use Labrador retrievers, so our teams got some strange looks when they first started going to these competitions,” says Lt. Tracey Blake of AGFC. “They’re competing with dogs that work with handlers every day, training to track down fugitives. But I think they’ve opened some eyes in the last few years.”

Blake says that some of the commission’s dogs are purchased but others are rescue dogs and duck dogs that “didn’t make the grade.”

“It’s amazing what some of them are capable of,” he says. 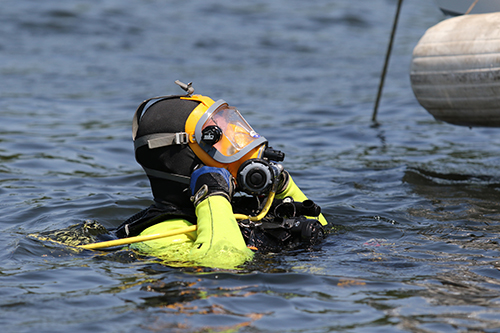 The commission’s enforcement dive team conducts body recovery, underwater evidence searches and investigates wildlife violations below the surface. It also patrols for divers who may be illegally harvesting game or endangered species. On-call 24/7, the team deploys anywhere in the state and is trained to handle the worst possible diving conditions. 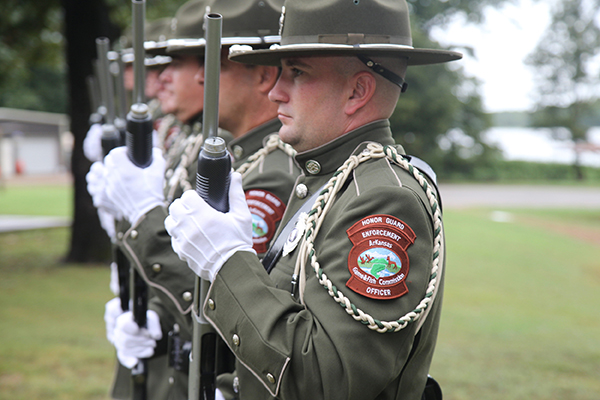 Creation of the Arkansas Wildlife Officer

Pres. Theodore Roosevelt kicks off the modern-day conservation movement with the three-day White House Conference on the Conservation of Natural Resources. Attended by governors and scientists, the conference addressed the depletion of natural resources through overharvesting and industrial development.

Gov. George Washington Hays signs Act 124 into law, creating the Arkansas Game and Fish Commission. The agency’s early directive was to establish regulations and enforce them, promote hunting and fishing, promote private game reserves and assist with the stocking of fish.

Nine state wildlife officers are hired for $80 a month with a stipulation — they had to supply their own horse.

Amendment 35 gives the commission authority to enact lasting wildlife regulations. Previously, AGFC officers had the right to inspect hunters and anglers for illegal game but didn’t have the authority to arrest poachers or issue citations for those violations. Amendment 35 provided the commission with autonomy from the state legislature and made wildlife regulations enforceable on a statewide basis. It also gave wildlife officers full police authority to issue citations and make arrests. While the state legislature still has control over some aspects of commission business, Amendment 35 represented the true beginning of wildlife conservation in Arkansas.