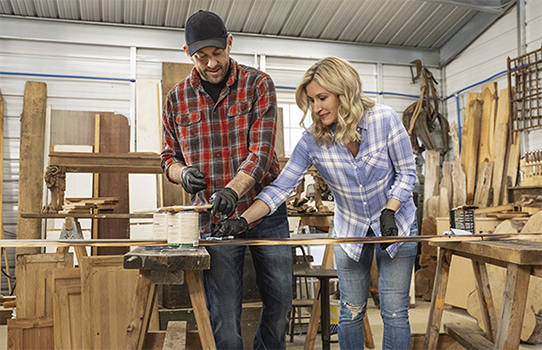 Dave and Jenny Marrs are heading back to HGTV for a second round of designing and renovating.

HGTV announced today that it had renewed the Marrs’ show, Fixer to Fabulous, for a second season, which is slated to premiere in fall 2020. The new season will consist of 13 episodes; the first season was 10 episodes.

In Fixer to Fabulous, Dave and Jenny Marrs, a husband-wife duo, redesign, renovate and overhaul historic homes in Northwest Arkansas. The show approximates the template established by the smash hit Fixer Upper, with one spouse handling design and the other handling the construction aspects. Dave handles the construction while Jenny serves as the creative force behind the projects.

Fixer to Fabulous also details the Marrs’ daily lives, as they raise five children and manage a farm.

Jenny Marrs announced the news on her official Facebook profile, thanking the show’s viewers for their support. “THANK YOU ALL for supporting, encouraging and cheering us on on (sic) this wild ride! We never (ever) thought we would have a television show — much less one that people actually watched! So, from the bottom of our hearts, thank you for allowing us into your living rooms each week. It has been an absolute joy to share these projects with you all,” she wrote.

According to an HGTV news release, the first season of Fixer to Fabulous garnered more than 17.9 million viewers.

READ MORE: Jenny and Dave Marrs: Behind the Scenes