“The family is our refuge and our springboard; nourished on it, we can advance to new horizons,” author Alex Haley stated. Quoted in Traits of a Healthy Family, a 1985 book by Dolores Curran, Haley went on to say, “In every conceivable manner, the family is link to our past, bridge to our future.” Haley’s Roots: The Saga of an American Family, which led to a blockbuster television mini-series in 1977, helped spawn a greater interest in African-American history and family history in general.

For Todd Perry, a 57-year-old Fort Smith, Ark., resident, the search for his own family’s history has been a nearly 40-year quest in which he has traced his family’s roots back to pre-Civil War Arkansas. Perry said his research has led to an 8-year-old child of mixed heritage who was kidnapped in Indian Territory, now Oklahoma, and sold as a slave in Arkansas in 1844. That child would become Harriet Dickinson, a family matriarch and Perry’s great-great-great-great grandmother. More about the matriarch shortly, but first a little more about Perry. 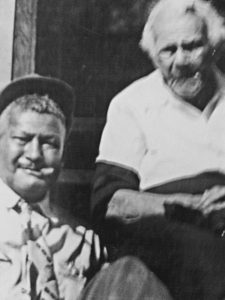 A library assistant at the Windsor Branch of the Fort Smith Public Library, Perry said his research efforts were motivated partly by Haley’s work and to a great extent by the late John Ferguson, longtime director of the Arkansas History Commission. Perry described his first meeting with Ferguson as heaven sent. He first heard Ferguson speak while Perry was a senior at Fort Smith’s Northside High School. Ferguson visited the school in 1976 as part of America’s bicentennial observance.

“I was inspired by his love of history,” Perry said of Ferguson, who died in 2006, shortly after retiring from the commission he headed for 45 years.

As for that family matriarch, what follows are a few highlights of her life, based on information Perry has pieced together. His sources include a 1956 article in a local newspaper, the Van Buren Press-Argus, now named the Press Argus-Courier, and an 1844 bill of sale.

The bill of sale, written in the flowing, highly stylized script of the time, documents the June 7, 1844, purchase of a “mulatto … aged about eight years … sound in body and mind.” Perry said the child had been taken by an outlaw gang in Indian Territory, and then brought to Arkansas, where she was sold to one Edward Clegg for $275.

The Press-Argus article was based on an interview with one of Harriet Dickinson’s daughters, Minnie Dickinson, who told a reporter that Clegg bought the child for his mother-in-law, Harriet Hamilton Austin, who became the young girl’s namesake. She was later given to Austin’s daughter, Maria Jane Austin Clegg, and became nanny to Clegg’s daughter, Maud. Eventually, the family moved to New Orleans, where Harriet grew up and married Ed Dickinson, whose mother was Cuban and father Irish.

Perry likens his family research to trying to put together pieces of a puzzle with some highly disparate pieces, his ancestry including people of African, Native American, Hispanic and Irish descent. 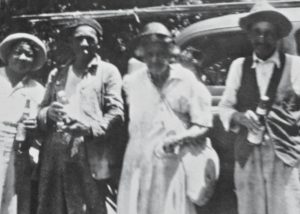 After the Civil War, Ed and Harriet Dickinson settled in the Van Buren area, where Ed worked as a barber and a church caretaker,ππ and she served as a nurse and a midwife.

Perry said that at one point Mrs. Dickinson returned to Indian Territory to try to find her parents, but searched in vain. She died in 1910 and is buried in Van Buren’s Fairview Cemetery.

Harriet Dickinson’s legacy was not buried with her, of course. She set the standard for generations of a family active in education, church and the community at large. Perry counts 175 living descendants of Mrs. Dickinson in five states: Arkansas, Texas, Georgia, Virginia and New Jersey.

In discussing his efforts to pull together many family stories and document them, Perry said: “It has been a difficult story, a mysterious puzzle.” And there are still many unknowns. For instance, he does not know the names of Harriet Dickinson’s parents. For that matter, he does not know Harriet Dickinson’s birth name. Plus, he added, “You have to wonder why someone would go into Indian Territory and steal her.”

But perhaps he is on the verge of one of those breathtaking breakthroughs of the type he had back in 2008. That was when he was contacted by a Texas man, who would give him that valuable piece of the family puzzle: the 1844 bill of a sale of the child who would become Harriet Dickinson.

Perry sees divine intervention at work in how he acquired that bill of sale of the 8-year-old child.

Robert Clegg of Victoria, Texas, a descendant of the man who bought young Harriet, was conducting genealogical research on the Internet when he read an account of a presentation Perry had given about his research on Harriet Dickinson. Clegg quickly recognized that he and Perry had a connection. And it just so happened the bill of sale had been discovered in an old family trunk.

Clegg soon got Perry’s contact information and gave him a call. Clegg said he told Perry: “I think I have something you’d be interested in.”

Perry, who was living with his grandmother, Edna Perry, at the time, said both he and his now late grandmother were overcome with emotion. “We cried uncontrollably. It was unreal to hold history.”

In recalling one conversation he had with Clegg, Perry said the Texan told him: “This [the bill of sale] is not mine. This is yours. This should be in the hands of Harriet’s family.”

Perry hopes to put together a book someday. But first there is more traveling and more research to be done, which he said is expensive and time-consuming. When interviewed for this article, he was preparing to go to the Eufaula, Okla., area to resume trying to determine the identities of Harriet Dickinson’s parents and to learn the young girl’s original name. He also planned to spend the month of August in New Orleans trying to find out more about Ed Dickinson, Harriet’s husband.

“There’s still much work to be done,” Perry said. “I’m not sure where this puzzle will end. It just goes on and on.”