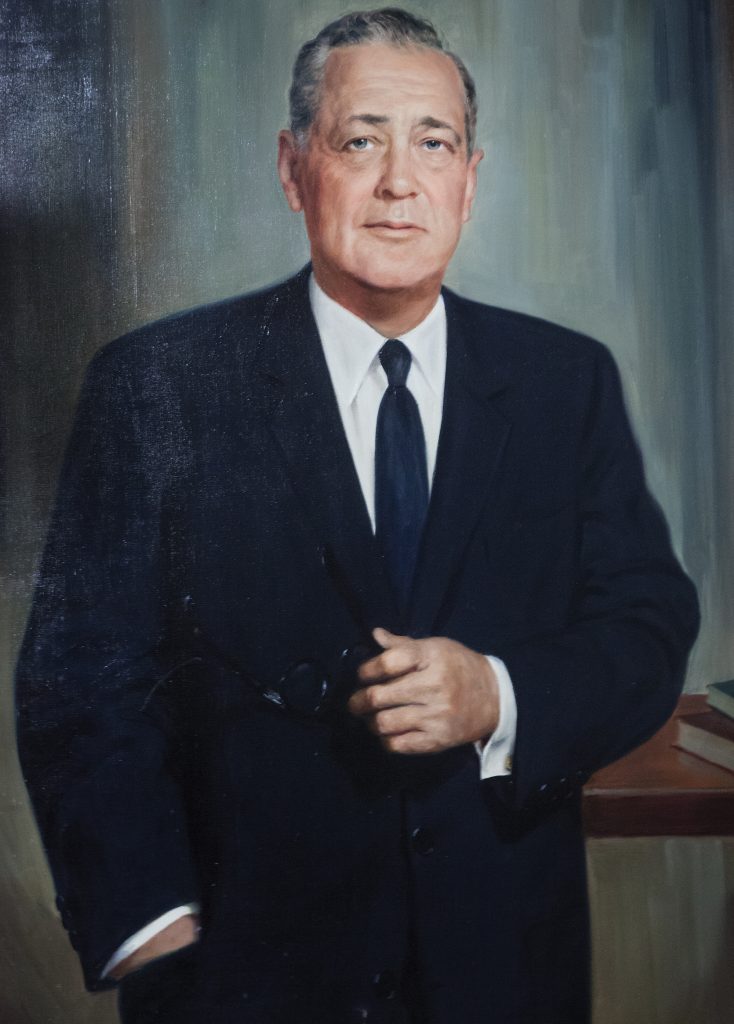 [dropcap]The[/dropcap] Grant County Museum is a testament not only to that county’s history, but also to rural and small-town life just about anywhere. It’s also a testament to one of Arkansas’ most powerful people of the 20th century, W.R. “Witt” Stephens. So, maybe it’s fitting that an article about this exceptional repository begins and ends with overtures to Stephens.

In case you are new to these parts, Wilton Robert Stephens was a tycoon, philanthropist and politico. He was born in 1907 in Grant County’s Prattsville community. His early jobs included picking cotton and selling peanuts. Displaying a remarkable sales ability, after high school Stephens graduated to selling novelty jewelry and Bibles. In 1932 he joined in a partnership selling municipal bonds in Little Rock. Two years later he founded W.R. Stephens Investment Co., now Stephens Inc., an investment that made him very wealthy. In 1954, he acquired Arkansas Louisiana Gas Co., which became Reliant Energy Arkla and is now CenterPoint Energy Inc.

Stephens’ biography in the Encyclopedia of Arkansas History and Culture refers to him as the state’s leading political and business figure for 30 years after World War II: “His influence in politics and finance, exercised behind the scenes, was unexcelled.” He died in 1991 at age 84.

As for the museum, the institution was born out of a project that Prattsville High School history teacher Elwin Goolsby undertook in 1963 to teach students about the area’s past. Initially, artifacts collected from around the county were housed in classrooms. In 1970, Goolsby’s growing collections were moved to a former church building downtown. Some 20 years later, the museum needed even more space. Thanks to some donated land, a grant from the city of Sheridan and a Stephens financial gift, the museum was moved into brand-new quarters on three acres about a mile from its old location in 1994. The museum’s main building is named in Stephens’ honor.

Inside that building you’ll find exhibits dating from far back into prehistory (a mastodon tooth, for example) to fairly recent events, such as Operation Desert Storm. You’ll also find displays related to Stephens’ tenure with Arkla as well as his brush with a bad guy in the 1930s (more about that incident later).

Next to the Stephens building sits Heritage Square, which offers a shady walking tour that includes buildings relocated from various sites around the county. 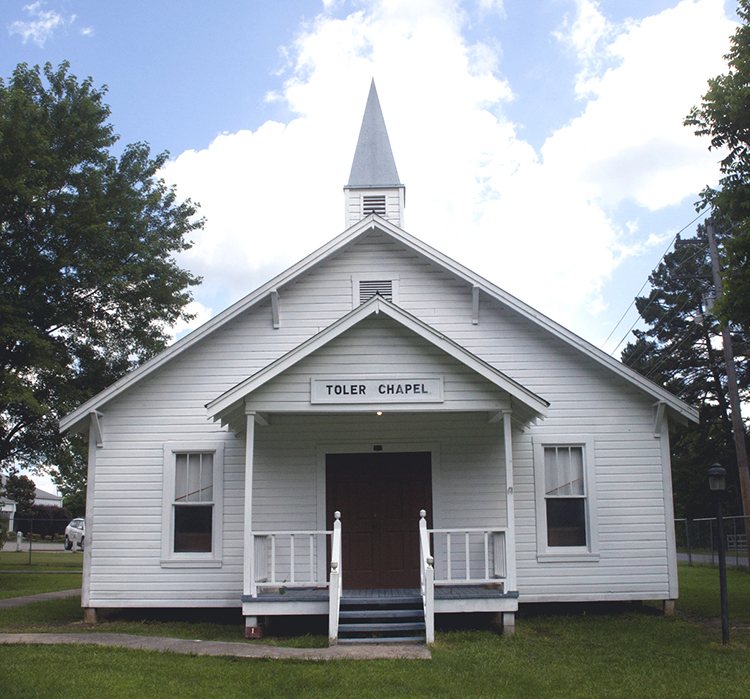 Among the structures are Toler Chapel, a Methodist Church built in the Brush Creek community about 1935. The church contains its original pews, piano and wood-fired heater. On one wall is a tattered photograph of the church’s first pastor, T. D. Spruce, and an unidentified newly married couple; she’s smiling, he’s looking like he might have the Great Depression in the back of his mind.

Near the church is the tidy Town House, built in 1904 about a block from the town square. Its furnishings go back to 1920s-era America.

A short walk from the Town House is a study in contrasts: the McCool House. It’s a classic dogtrot home, so-called because it has a breezeway, or dogtrot, separating two cabins that share a common roof. Such homes once were common in the southeastern United States. Typically, a family cooked and ate in one cabin and slept in the other. The breezeway provided a buffer between the kitchen’s heat and the sleeping quarters; it also offered a cool place for a hound to lounge. This home was built in the early 1870s by G.N. and Martha Jane Paxton McCool. They brought 12 children into the world in this small dwelling. 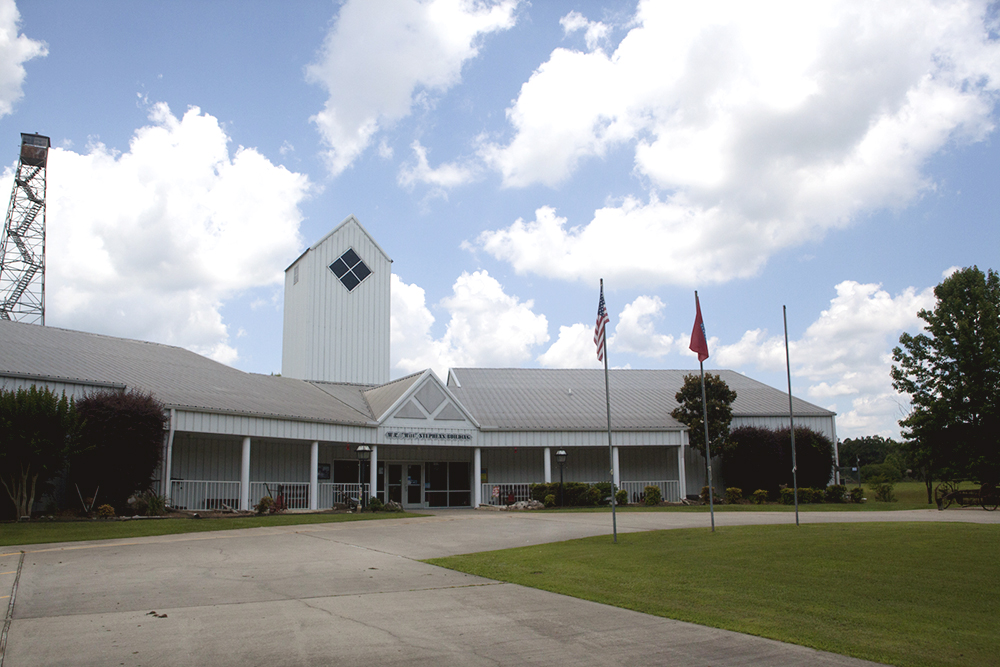 Visitors can get a good idea of what life was like for the McCools and other pioneers in the Stephens building’s main gallery. Here, for instance, there’s an exhibit explaining how soap was made: pouring water over ashes in a hopper to leach out lye, then combining the lye with fat renderings. Nearby is an outhouse display, stating that the shape of a vent sawed in a privy’s door identified whether the toilet was meant for women or men; a crescent moon for females, a sun or star for males. Such identifiers were important for public toilets when few people could read or write.

The museum brims with similar details about folk life as well as specific folks.

Take R.M. Rodgers, the county’s treasurer in the 1800s. There were no banks in the county, so Rodgers stashed the public’s cash in a large trunk at his home. He kept the trunk locked and the key forever in his possession. For the eight years Rodgers served as treasurer, he and his wife never left home at the same time; one always kept an eye on that trunk, which is displayed in the museum.

Dr. Richard C. Rhodes and his family moved in the 1840s to what would become Grant County. The county, named after Union Gen. U.S. Grant, was not actually established until the tumultuous Reconstruction Era; it was carved in 1869 from portions of Jefferson, Saline and Hot Spring counties. The county seat was named for another Union general, Philip H. Sheridan.

Besides being a doctor, Rhodes was a wealthy farmer, living in a large, two-story cabin. In 1867, outlaws rode onto Rhodes’ farm and demanded money. When Rhodes refused, the outlaws hanged him with a rope and rode away. Rhodes was still alive when farm laborers cut him down. Then the outlaws returned and hanged him a second time, with wire, which severed his windpipe. Once again, the outlaws rode off and Rhodes was cut down, still alive, holding his throat together with his fingers. The doctor-farmer soon died, though, infection accomplished what two hangings failed to do. 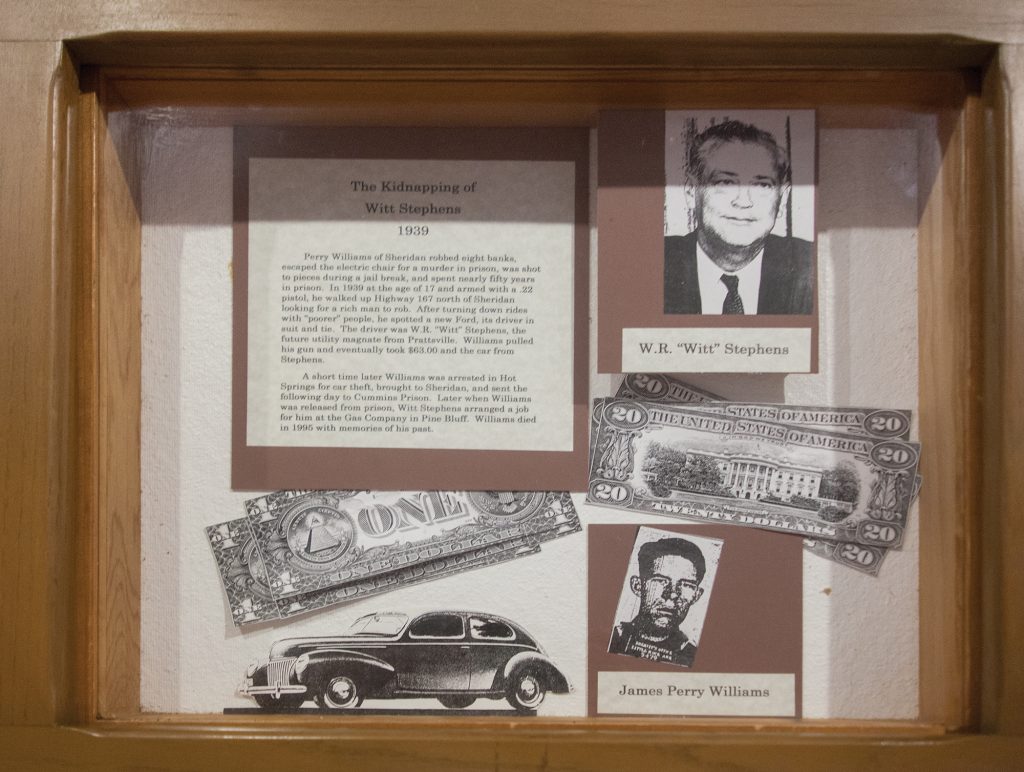 “The Kidnapping of Witt Stephens” display

Another display titled “The Kidnapping of Witt Stephens” describes a 1939 incident involving the future natural gas utility giant and Perry Williams of Sheridan. Armed with a .22-caliber pistol, the 17-year-old Williams set out one day and “walked up Highway 167 north of Sheridan looking for a rich man to rob. After turning down rides with ‘poorer’ people, he spotted a new Ford, its driver in suit and tie.”

That driver happened to be Stephens. Williams robbed him of $63 and his car.

Later, Williams was arrested for auto theft in Hot Springs and sent to Cummins Prison, some 30 miles southeast of Pine Bluff. During a crime-filled life, Williams “robbed eight banks, escaped the electric chair for murder in prison, was shot to pieces during a jail break, and spent nearly 50 years in prison.”

Upon Williams’ release from prison, Stephens arranged a job for him at a Pine Bluff gas company. Williams died in 1995.

Discussing Stephens’ act of finding a job for someone who had once robbed him, Lindsey Stanton, the museum’s director, said, “That says a lot about his character.”

Stephens’ benevolent attitude continues to be seen at the museum. “His family is still very involved here,” Stanton said. “And very generous.”

The county-owned museum, at 521 Shackleford Road, is open 9 a.m. to 4 p.m. Tuesday through Saturday. Admission is free to Grant County residents; otherwise it’s $3 for an adult, $1 for a student. From downtown Sheridan, take U.S. 270 west to Arkansas 46 and turn south, going one mile to Shackleford.