Tucked away near the famous grave and monument to David Owen Dodd at Mount Holly Cemetery in Little Rock, Ark., is a small, black-and-gray memorial stone to an Arkansan who, while on a bombing run with his B-29 crew of 11, is still missing off the coast of Japan. While not nearly as prominent as some of the other military markers, this small stone acknowledges the life of Lt. Calvin Regnier, whose story is one of courage, loss and love of family and country. 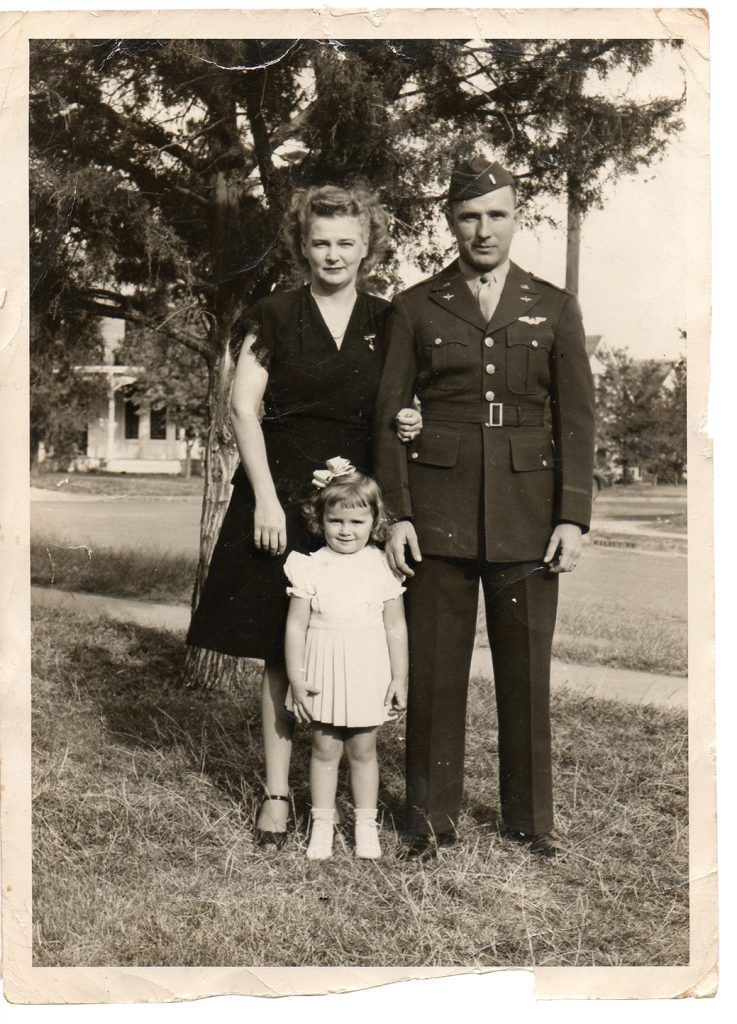 A photograph of the Regnier family

[dropcap]After[/dropcap] Regnier was declared legally dead, his family placed the marker and memorial. While it contains his basic information, the etching of a B-29 and the words, “He died that liberty might not perish,” tell only part of his story.

These words are not used often today, but, in the 1940s, with America fighting a world war on two fronts, they were very much a part of life. Originally from Paragould, Ark., Calvin Wall Regnier and his family later moved to Little Rock. Before joining the corps, he married the love of his life, Alma.

Calvin Wall Regnier was an above-average student at the University of Texas when the war came to America and, like thousands of others, he left his studies to fight for his country. After attending basic flight school at the University of Kansas, he was assigned to several posts where he excelled and became a bombardier on Boeing’s famous B-29 Superfortress, the largest, most complex and deadly airplane in America’s arsenal at the time. The Boeing Co. manufactured almost 4,000 of these giants, and young airmen like Regnier filled the ranks of bright and brave young men volunteering to fly them. He was a first class bombardier.

By late 1944, the island-hopping campaign of Gen. MacArthur had moved closer to the Japanese homelands, and bases for bombers were being established along their routes. In the Mariana Islands, at places such as Isley Field, the 500th Bombardment Group had thousands of airmen flying and maintaining the bombers.

Isley Field was one of the truly inhospitable places in the Pacific. Little more than sand, it was hot and rained frequently. The airmen complained of the heat and mosquitoes, and they wrote letters home asking for all sorts of basics. They thanked their wives, mothers and girlfriends for the cookies and cakes, though they were often dried out by the time they arrived. Men like Regnier lived in tents and each day faced repeated missions and the deaths of close friends and fellow lost airmen. The old adage about soldiers not getting to know those around them for fear of death did not apply. Regnier’s letters show that they were a close-knit group and suffered mightily when a fellow crewman was lost.

Though Japan was declining militarily by early 1945, they were by no means a helpless nation. The larger cities were still well-defended by strong anti-aircraft positions, and Japanese fighters still engaged the bombing formations at will. It would be another seven months before Japan surrendered. The sight of parachutes and B-29s going down in flames was a part of almost every mission.

Regnier’s descendants still live in Little Rock. His granddaughter shared with me numerous personal letters and government documents concerning the plane loss and the final days of his young life. Reading his letters, written to his wife, Alma, and his young daughter, Kathleen, starting in December 1944 — including one written the night before his final mission on Feb. 10, 1945 — it is easy to understand his family’s love for him.

He was a bright, sensitive and highly intelligent young officer who took great pride in what he was doing for his country. He loved his family, and, in his letters, he wrote of the bright and happy future that he looked forward to in Arkansas at the conclusion of the war. He knew the United States was winning, and one could sense the pride he took in helping assure the final victory. His letter writing increased to almost daily in the final two months of his life, concluding with one written the day before his last mission in which he asked Alma to send flower seeds to help beautify the tent area where they were living. These letters were not the words of a cold-hearted warrior. He was doing a valuable and dangerous job for his country, and he knew it.

The bombing raid of the Nakajima Aircraft Works at Ota, Japan, took place on Feb. 10, 1945. Regnier got up at 3:45 a.m. that day for the briefing and breakfast. It would be his last day on earth.

[dropcap]Lt.[/dropcap] Calvin Regnier of Paragould and later Little Rock, Ark., and the other 11 members of the crew of the B-29 bomber Z Square 13, along with 84 other bombers and crews, lifted off from Isley Field in the Marianas on the morning of Feb. 10, 1945. The Z Square 13 was piloted by Capt. Tull McGuire, a former B-29 test pilot and one of the most experienced airmen aboard a B-29 that morning. The crew was young but highly experienced. Their target was the Nakajima aircraft plant at Ota, Nakajima Aircraft and destroying it would certainly hasten the end of the war. As they approached their target, they encountered anti-aircraft fire and were also jumped by a group of Japanese fighters.

What happened next is still a mystery. One of the witnesses from another plane thought he saw something falling from one of the plane’s wings about the time the Japanese planes attacked them. Another witness saw the plane slipping backwards in the formation and crossing to the right. He observed the plane having difficulty in making a turn, but, once stabilized, it seemed headed for home. Another witness stated he observed smoke trailing from an engine. Numerous radio calls to the plane went unanswered. Z Square 13 was one of 12 planes lost that day over Japan. It is assumed Regnier, along with his plane, went down in the ocean, but none of the rescue submarines stationed off the coast of Japan were able to locate it. In a strange coincidence, one of the submarines on station was the USS Razorback, which now floats on the Arkansas River, and houses the Arkansas Inland Maritime Museum in North Little Rock.

Several weeks after the plane’s disappearance, Regnier’s personal effects were packed up and sent home as the war raged on. Nonetheless, he lives on today through both the cherished memories kept by his granddaughter and family and his letters to his wife, Alma and his mother; from friends; the group chaplain; the War Department; and even a signed letter from Gen. Carl Spaatz, the leader of all the Pacific air forces.

Regnier helped secure the freedoms we enjoy today, but, in the end, he never came home to Alma, daughter Kathleen and his life in Arkansas, which he so richly deserved.

Just like his family, we Arkansans should be thankful for his life and be mindful as his epitaph states: “He died that liberty might not perish.”