Bartleby Clown College in Jonesboro (Craighead County) was a short-lived institution for the training of clowns and other circus performers.

Courtesy of the Encyclopedia of arkansas history & Culture

[dropcap]Though[/dropcap] it lasted only seven years, it contributed to the increasing professionalism of the clowning field and directly led to the creation of the Ringling Bros. and Barnum & Bailey Clown College in 1968. Bartleby Clown College also inspired the creation of the Fool’s Guild in Terry Pratchett’s Discworld series of fantasy novels.

Bartleby Clown College was established in an abandoned warehouse in Jonesboro by the Southern States’ Conference on Clowning (SSCC) on April 1, 1952. The conference had long been looking to establish a training institution. It chose Jonesboro because the city, having extensive rail connections, was already a regional hub for many circuses. At first, many local residents were not enthused by the placement of the clown college there. As historian Michael Dougan wrote, “The perception was that the city already had the state’s cow college” — what is now Arkansas State University — “and so they were sensitive about playing host to clowns not already a part of city government.” That hesitancy wore off, however, after classes actually started, because, as part of their training, the students went throughout downtown Jonesboro performing for free for the general public. The first class at Bartleby consisted of 97 students.

In some ways, the greatest challenge the small college faced was the need to desegregate. Arkansas began desegregating its institutions of higher education in 1948, though high schools remained segregated until 1954 or after. The problem facing Bartleby’s administrators was that students came to class in the traditional white face paint and were not required to note race on their application forms; thus, the school might have been desegregated with its very first class or, conversely, might have been unknowingly resisting court-ordered desegregation mandates. Because the school offered only intensive training sessions during which it was forbidden to use anything but one’s professional persona, administrators balked at the idea of making the students reveal their races. Eventually, the school decided that a certain percentage of student clowns, chosen at random, would appear in blackface rather than whiteface. A few also appeared in purpleface. 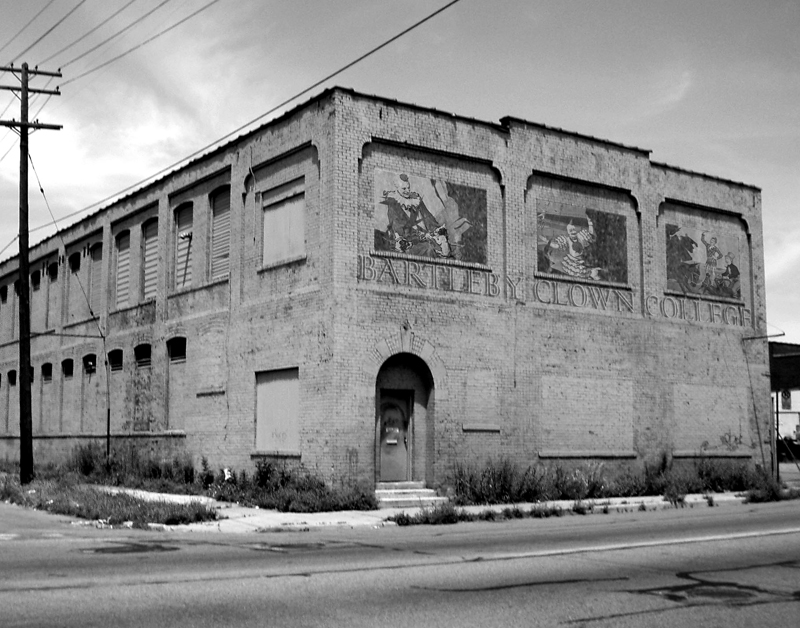 Courtesy of Encyclopedia of Arkansas

The college faced a number of difficulties during its short life. Divisions within the SSCC left the college with only half-hearted support from its primary sponsor. Originally, the college’s growth plan called for it to build a second hall for the exclusive training of mimes by 1955. Until the college’s closure in 1959, the mimes continued to hold classes in an adjacent field, called the Mime Field, where they pretended to sit at desks, write on chalkboards and to be trapped in large boxes. In addition, the Chronicle on Higher Education gave the institution a poor rating after the college experienced several fatalities in 1955 and 1956 of students minoring in Rodeo Clowning. However, Bartleby did institute one of the first-ever carpooling programs in the state; in the college’s last year of operation, all 72 students commuted to class in a total of three cars.

In 1959, after years of declining enrollment, the SSCC decided to close Bartleby Clown College. Pres. Steve Teske Sr. called a press conference to announce, in mime, the closure of the college. However, the journalists covering the event misunderstood his gestures, and so coverage of the event varied. The Jonesboro Sun headline read, “Clown President Admits Communist Leanings — White Paint Disguises Red Soul,” while the Arkansas Democrat reported that Teske was taking a job in the administration of Gov. Orval Faubus. Teske actually moved on to become an instructor with Ringling Bros. and Barnum & Bailey Circus. In 1968, he was able to use his experience in Jonesboro to head up the opening of that company’s own clown college, and so Bartleby’s legacy continued long past its demise.

This entry and photograph served as the Encyclopedia of Arkansas’ 2008 April Fools’ joke and, as a consequence, is plagued with deliberate and humorous historical inaccuracies. There is such a place as Jonesboro and such a person as Michael Dougan, but all other statements are not factual. Though they recognize the dividing line between farce and reality is sometimes a slim one, the Encyclopedia of Arkansas has a commitment to present only truthful accounts of Arkansas history and culture, and so they do not present such entries more than once a year. Enjoy …  April Fools!