[dropcap]Ensign[/dropcap] Jim Dick Miller stood on the quarterdeck of the burning USS Arizona. A bomb had just exploded on the third deck, and water was seeping into the lower handling room. Badly burned men laid around him, and Capt. Van Valkenburgh and Adm. Isaac Campbell Kidd are nowhere to be found; the gun turret was only partially manned and full of suffocating gas, and all power was shut down. Arizona was defenseless against its unknown attackers. It was Dec. 7, 1941, and Miller was 24 years old — only two years out of the U.S. Naval Academy.

The following account was compiled from military reports, Miller’s obituary, a 2000 article by the Los Angeles Times and information from the Arkansas Inland Maritime Museum. 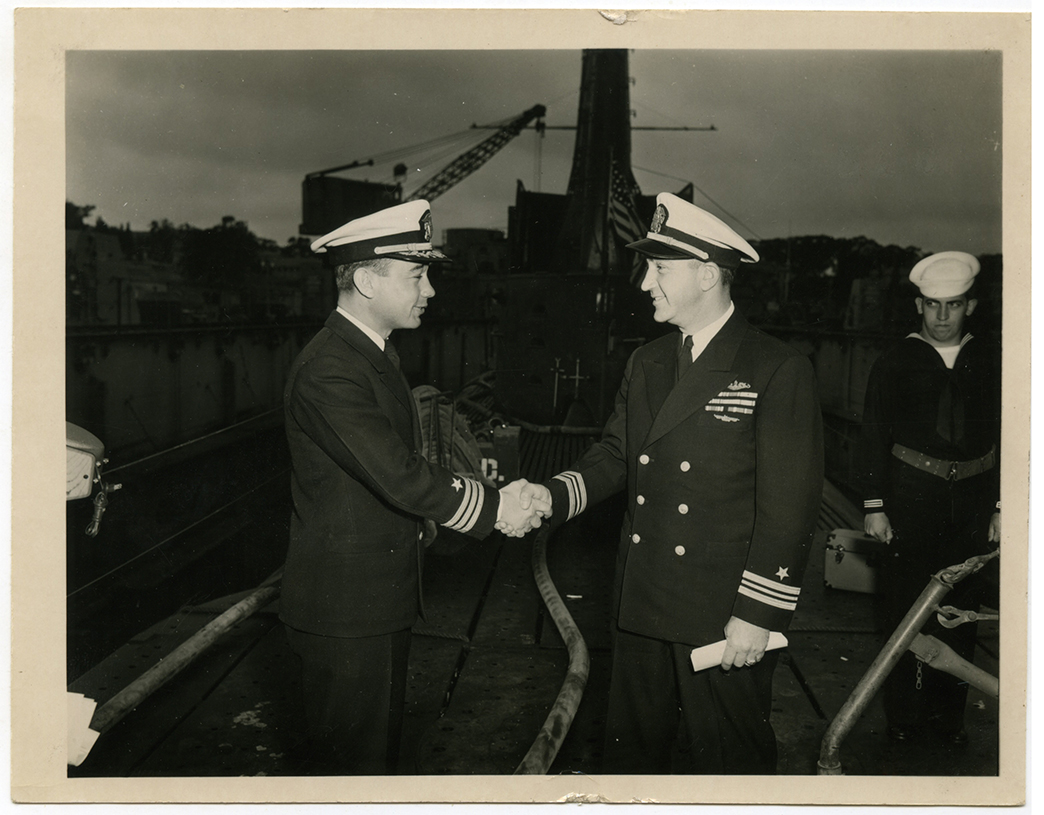 This image was taken aboard USS Razorback (SS 394) in San Francisco in 1950. On the left is Commander Miller and on the right is Lieutenant Commander Worley at a Change of Command Ceremony.

Born in Van Buren, Ark., in 1917, Jim Dick Miller was one of seven children. His family moved to Oklahoma and then Texas, where he graduated from Borger High School. After attending Amarillo Junior College, he entered the U.S. Naval Academy in 1935. Immediately after graduation he was deployed to Arizona.

According to the Los Angeles Times article, Miller described stepping onto Arizona’s deck that morning in a 1991 article by Canadian weekly newsmagazine Maclean’s: “I ordered my men out of the [gun] turret to fight the fires and take care of the injured. The whole forward part of the ship was burning. I remember the ship’s cook walking out through the wall of flames saying, ‘Help me, help me.’ He was on fire, but he was still on his feet. I helped to get him in a boat … Those who were on their feet and injured, it was from the tremendous fire or shrapnel. It is all vivid in my mind.” He went on to say that though the noise must have been great, and bullets were hitting the deck just feet away, the shock of the moment was forefront. 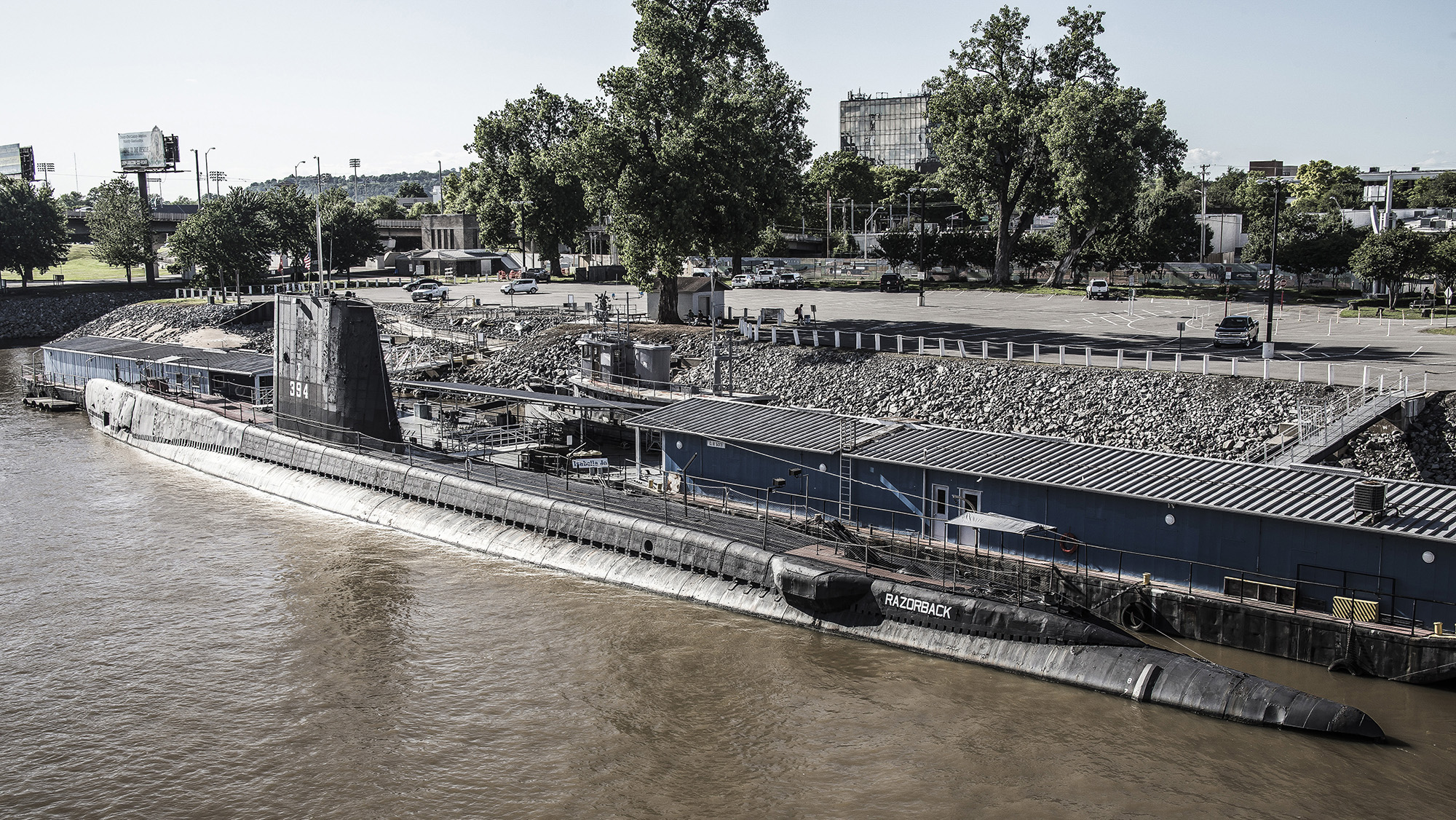 USS Razorback (SS 394) moored at the Arkansas Inland Maritime Museum in North Little Rock. Guided tours are available of the submarine every weekend.

The Arizona Action Report Ensign Miller submitted for Dec. 7, 1941, brings to life the confusion and uncertainty felt by the men aboard:

An attempt to call the center engine room on the ship’s service telephones was unsuccessful because the ship’s service telephones were out of commission. It was also impossible to reach the engine room because of fire and smoke and gas. The First Lieutenant was on the quarterdeck and in charge. About all we could do was to try to put out fires and drag some of the wounded men under the protection of the overhangs of the turrets.

Miller fought fires and helped injured men onto a rescue motor launch until the first lieutenant ordered abandoned ship. It was apparent that Arizona could not be saved:

All of our guns had ceased firing, the main, forecastle, and boat decks were burning; smoke obstructed a view of the foremast and the forward part of the ship. All officers’ quarters aft were flooded and the quarterdeck forward was awash.

All men abandoned ship, jumping into life rafts that had been cut down, crawling to motor launches and even swimming for shore. Ensign Miller was on the last motor launch to leave Arizona, rescuing men in the water on the way to Ford Island. When they landed, he was ordered to remain on shore in charge of the injured men, while others went to rescue more men. He led the men to an air raid shelter on the northeastern corner of Ford Island, staying with the men in the shelter until all were taken to the air raid hospital.

For his actions in Pearl Harbor, Miller received the Navy Cross. He was praised for rescuing the burned and wounded men with a “calm, cool manner and with such excellent judgment, it inspired everyone who saw him and undoubtedly resulted in saving many lives.” He would eventually become the highest-ranking survivor of Arizona.

A Naval Star is Born

After Pearl Harbor, Miller attended Navy submarine school, graduated in 1942 and worked as chief engineer, executive officer and then commanding officer on the submarine, USS Spearfish. He received the Silver Star for his help during the submarine’s Tenth War Patrol in Japanese waters, sinking 21,000 tons of enemy ships and damaging an additional 18,000 tons with aggressive torpedo attacks.

While stationed in Los Angeles, Capt. Miller met Mary Jane Sullivan, whom he married on St. Patrick’s Day in 1943. They had two sons, William and James.

Other missions of note included the 1946 Arctic expedition; service in Florida during the Cuban Missile Crisis; and command of the submarine USS Razorback, currently docked at the Arkansas Inland Maritime Museum in North Little Rock.

Capt. Miller led daily exercises and simulated attacks during Razorback’s Third “Simulated War Patrol” in Guam and Japan. The museum records that under his watch, Razorback “was able to slip past four DESDIV 32 destroyers, make an approach on USS St. Paul, and simulate launching 10 torpedoes at the cruiser.” His outstanding leadership earned Razorback the coveted Navy “E” for overall excellence.

It wasn’t all work, however; the men aboard Razorback made short weekend stays in Yokosuka, Japan, and the submarine’s basketball team won seven consecutive victories throughout the Pacific, mostly against teams from destroyers.

Even after his service in the U.S. Navy, retired Capt. Miller felt the need to help others. He returned to college after 30 years, earned a master’s degree in math from North Carolina State University and taught at community colleges in San Diego. According to his obituary, he was “active in community affairs in Coronado, was a member of Graham Memorial Presbyterian Church and was active with veterans’ organizations, including the U.S. Submarine Veterans of World War II.”

Dec. 7, 2016, will mark 75 years since the Japanese attack at Pearl Harbor. Capt. Miller, along with other Arizona survivors, can still be heard today at the USS Arizona Memorial in Honolulu, Hawaii.

For a dive into history a little closer to home, visit the Arkansas Inland Maritime Museum in North Little Rock, where you can tour the Razorback, and the staff can show you artifacts and share more exceptional stories like Capt. Miller’s. The museum is the only place in the world, other than Hawaii, to have two Navy vessels that bookend World War II, Razorback and the recently added tugboat, USS Hoga.