For some 75 years, well-known visitors to Arkansas — presidents, preachers, actors, athletes, poets and singers, among many others — have been awarded Arkansas Traveler certificates.

[dropcap]This[/dropcap] anniversary offers an opportunity to review a bit of the honor’s history as well as the names of some who have received this award.

The certificate, signed by the governor, secretary of state and the recipient’s sponsor, commissions each visitor to serve as a goodwill ambassador “to the people of other states, the people of nations beyond the borders of the United States or wherever this Ambassador of Arkansas may hereafter travel or reside.”

The Arkansas Legislature approved a resolution to create the award in early 1941 and the first certificate was granted May 20. The recipient was Pres. Franklin D. Roosevelt.

More certificates quickly followed. On June 19, 1941, awards went to two recipients: Thomas J. Watson, one of IBM’s founders, and James Byrnes, a South Carolina politician whose career included serving as a U.S. senator, U.S. Supreme Court justice and secretary of state. On June 27, a Traveler award went to R.J. Reynolds Jr., the president of the North Carolina tobacco company that bore his father’s name. And, on July 15 the award was bestowed upon three entertainers with Arkansas ties: Chet Lauck, Norris Goff and Richard Ewing “Dick” Powell. Lauck and Goff, who grew up in Mena (Polk County), were known for their nationwide radio program Lum and Abner. Powell, who was born in Mountain View and grew up in Little Rock, was a well-known singer, actor, movie producer, director and studio head. Since then, the Arkansas Traveler has been awarded to a lengthy list of luminaries, including boxer Muhammad Ali, poet-author-activist Maya Angelou, tennis star Arthur Ashe, cowboy actor and singer Gene Autry, publishing executive Steve Forbes, evangelist Billy Graham, entertainer Bob Hope, acting-singing couple Roy Rogers and Dale Evans, and Pres.Ronald Reagan. More-recent recipients include singer Garth Brooks, who performed at Verizon Arena in North Little Rock in 2014, Republican presidential candidate Donald Trump, who spoke last July at the Reagan-Rockefeller Dinner in Hot Springs and pop/R&B singer Tamar Braxton, who appeared in April at the Designers Choice Fashion Preview. 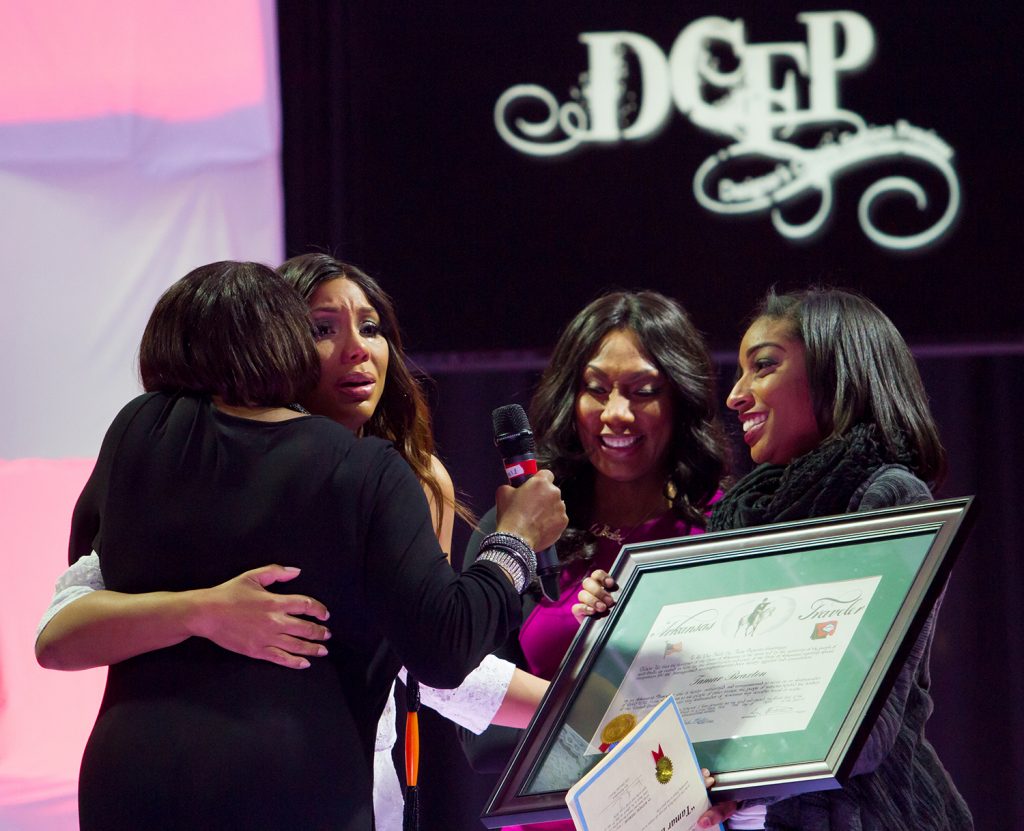 R&B singer Tamar Braxton was overcome with emotion this April when she received her certificate and later talked about it on the talk show “The Real.” (Photo courtesy of Timmons Arts Foundation)

The Arkansas Traveler story is tied to Col. Sandford C. “Sandy” Faulkner, who was active in Arkansas politics, banking and farming in the 1800s. In fact, Faulkner County was named in his honor. The story goes that Faulkner became lost in the Ozarks while canvassing the state with several politicians. Seeking directions and perhaps shelter, he stopped at a squatter’s ramshackle log cabin.

“According to Faulkner’s frequent retelling of the event,” the Encyclopedia of Arkansas History and Culture states, “the settler was at first surly and uncommunicative but became more welcoming when Faulkner proved able to complete the fiddle tune that the settler had been playing. Generally when Faulkner told the story, only he and the settler participated in the conversation. Faulkner’s story of the ‘Arkansas Traveler’ rapidly became part of the state’s folklore, leading to a famous painting and lithograph depicting the event, as well as to frequent performance of the tune, which Faulkner often played as part of his narrative.” 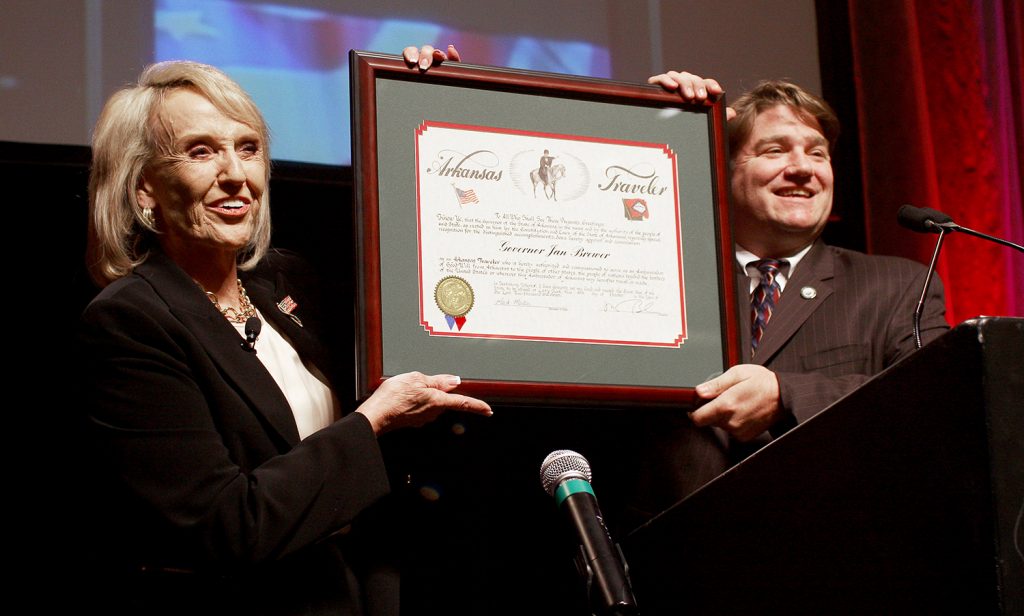 The “Arkansas Traveler” painting, according to David Ware, Arkansas Capitol historian, may be the most famous artwork associated with the state. “I knew the painting long before I came to Arkansas, thanks to a Currier and Ives print that hung on my parents’ living room wall,” said Ware, who grew up in Nebraska and moved to Arkansas in 1999.

Edward Payson Washbourne, an Arkansas artist, completed the original painting in 1856. It shows Faulkner sitting astride a horse and gesturing while the squatter sits on a barrel. His stern-looking wife, who’s smoking a pipe, and several children eye them from a doorway, above which is a sign that reads, “Whisky.” In 1870, Currier and Ives, the New York City printmaker, produced lithographic prints of the “Arkansas Traveller” (with two Ls) and a related piece, “The Turn of the Tune.” The latter shows Faulkner sitting astride his horse and fiddling while the settler does a dance; the whole family has ventured outside at this point, one boy holding the reins of Faulkner’s horse. 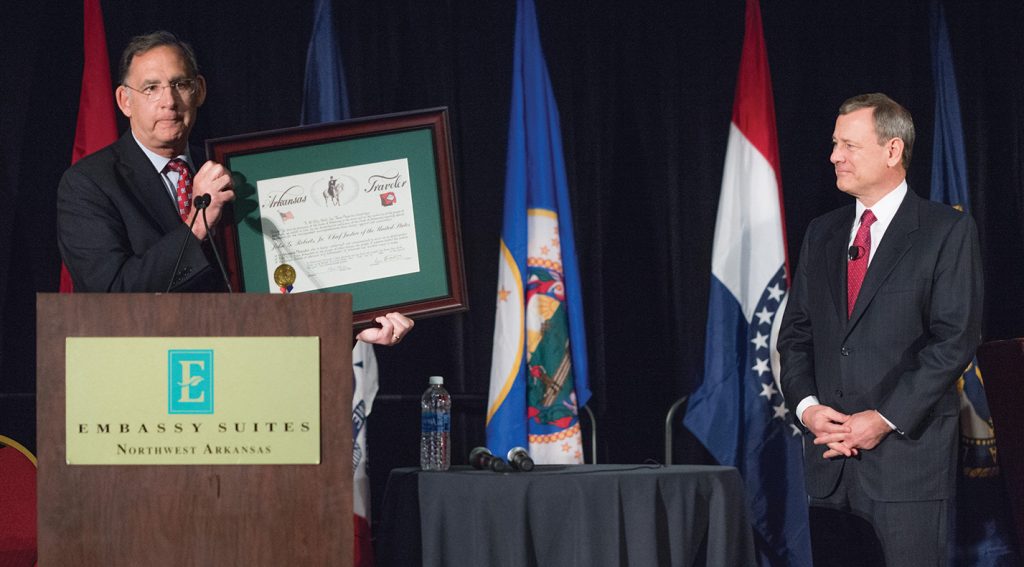 The depictions have been criticized for reinforcing negative Arkansas stereotypes, but Ware offered this take: “It’s not just a hillbilly story. I like to think of it as folklore, reportage and a parable of hospitality.” He explained that the traveler and the squatter complement each other. “In a way, they form the whole of the state, one in which the rural and the urban can comfortably co-exist.”

In a nutshell: Once common ground is established, everyone has a good time. “It’s a good reminder of how to treat guests,” Ware said.

Here are tidbits, principally from Ware’s research and Encyclopedia of Arkansas entries, related to the Arkansas Traveler and the man who did so much to popularize the story.

The award: After the Legislature created the Arkansas Traveler Certificate, then-Secretary of State C.G. “Crip” Hall and Armitage Harper of Democrat Printing and Lithographing Company in Little Rock are believed to have collaborated on the design and text for the award, which was printed by Harper’s company. George Fisher, the noted political cartoonist for the Arkansas Gazette, later tweaked the design. Ware has been unable to find official documentation of this, but that’s the word he received from past state employees.

The song: Besides being the name of an award and a painting, the “Arkansas Traveler” also is the name of a much-recorded song. Sheet music for it was first published in Cincinnati, Ohio, in 1847 as “The Arkansas Traveller and Rackinsac Waltz.” The encyclopedia states that no one was credited with the composition, but it “was most likely written by Jose Tosso, a classical violinist and composer who lived in Cincinnati and was locally famous for his version of the ‘Arkansaw Traveler.’” The encyclopedia also notes that the song has become one of the most recorded tunes in American history and that a 1922 version by an Arkansas native, Eck Robertson, was among the first 50 recordings named to the National Recording Registry of the Library of Congress. A version of “Arkansas Traveler” was adopted as the state song in 1949. Previously, the state song had been “Arkansas,” written by Eva Ware Barnett, but a copyright dispute with her heirs led its being replaced. In 1963, “Arkansas” once again became the state’s official song, and the “Arkansas Traveler” was designated the state’s official historic song.

The story: Some sources suggest the “Arkansas Traveler” story predates Faulkner’s association with it. It may have existed, according to Ware, as a comic routine that poked fun at squatters in the Arkansas hills. The Fireside Book of Favorite American Songs, Ware said, states that “Arkansas Traveler” was a popular play in the mid-1850s in taverns in Salem, Ohio. In the play a traveler finds a squatter at a cabin playing a tune. The squatter is trying to remember the end of the tune, which he learned in New Orleans. The entire play revolved around the squatter’s efforts to remember the end of the tune, which would be played with much improvisation.

The man: Faulkner, whose first name is sometimes spelled Sanford, is buried in Little Rock’s Mount Holly Cemetery. Situated off Broadway just south of Interstate 630, the cemetery is the resting place of many who had a role in early Arkansas history. Faulkner’s birth year is uncertain. The encyclopedia states it was probably 1803. He died in 1874. Though active in politics, Faulkner never held office, running unsuccessfully for legislative posts when Arkansas was a territory and after it became a state. In 1873, the year before he died, the General Assembly named Arkansas’ 69th county for him.

Ware notes that, while the song itself may have many parents and the general story incorporates old ideas of country-meets-city humor, the sense of the traveler and the countryman finding common ground in music and hospitality distinguished Faulkner’s version from others and makes it his own.