Historical Gems: A Lifetime Of Recipes

[dropcap]In[/dropcap] the South, an inextricable link exists between funerals and food. As soon as a Southern cook learns of a death, he or she heads for the kitchen to whip up a casserole, dessert or other comfort food for the grieving family. After the funeral, family and friends gather for a meal and sit around telling favorite stories about the deceased. Southerners like to eat, and they like to reminisce. So what better way to provide upkeep for a cemetery than to create a cookbook as a fundraiser?

Recipes in Perpetuity: Timeless Tastes and Tales from Residents and Future Residents of Mount Holly, a cookbook published in 2010 by the Mount Holly Cemetery Association, feeds both the body and the imagination by capturing the recipes and the stories of a wide variety of people—everything from Lillian Scott’s Orange Pecans (that saved Elmhurst Plantation from financial ruin) to Matilda Buchanan’s “How to Trap a Man” Chocolate Pie.

Mount Holly Cemetery sits in the middle of downtown Little Rock. The four-block site contains a who’s who of notable Arkansans, including 11 Arkansas governors. The Mount Holly Cemetery Association provides funds for the upkeep of the cemetery through a series of fundraisers, ranging from picnics to tours to special events such as the annual Tales from the Crypt. 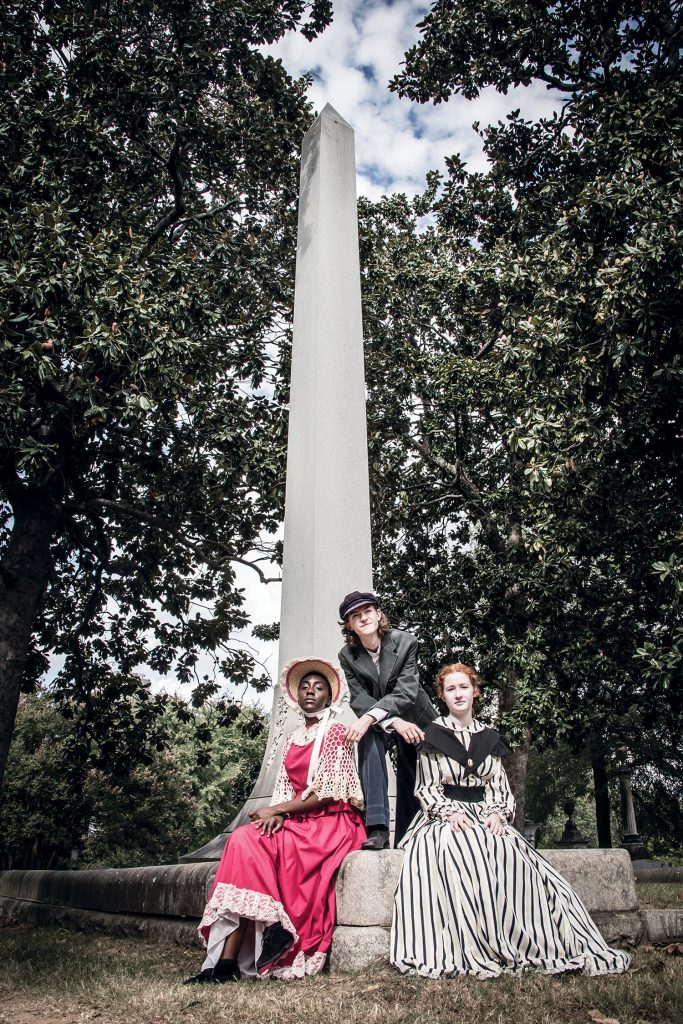 Board members Frances Cranford and Nancy McDonough compiled the stories and recipes for the cookbook by drawing on the expertise of Mary Worthen, a long-time board member and avid historian. Worthen, who joined the cemetery association in 1953, spent years researching the residents of Mount Holly and using their stories for her famous tours of the cemetery before her death in 2015.

“She knew all the tales of the people buried there,” said Cranford. “We wanted to capture that [information] while we could.” Worthen also had accumulated a wealth of recipes handed down from or associated with residents of the cemetery. The authors supplemented these recipes with additional heirloom recipes as well as contemporary family favorites.

Readers who remember Daisy Keatt’s English scones or ginger cheese muffins from the Peacock Tea Room (and later from the tea room at Blass Department Store) can whip up a batch from the recipes in the book.

Some of the recipes hold special memories for the contributors, such as one for Carmelite Nuns’ Whole Wheat Bread contributed by Laurie Smith Fisher. Fisher remembers going with her father, Judge George Rose Smith, to buy bread from the nuns before he started making it himself.

The trio worked on the book for three years. “I think we could have worked on it forever because Mary wanted to include everybody, Cranford said. “Finally I said, ‘We’ve got to get this thing to press.’”

Mixed in with stories about individuals, the book also contains a wealth of information about various clubs and organizations, including:

• The Boathouse (officially The Athletic Association of Little Rock), which held its first regatta on the Arkansas River in 1883
• The Gilt Edge Hunting and Fishing Club, which had silver cups and plates made from mutilated silver coins collected by James Hornibrook at his tavern
• The Herb Society, which formed in 1966 to revive knowledge and use of herbs (the authors note that herbs had almost been forgotten at that point in culinary history)
“I love Mary’s story about the William Booker Worthen,” Cranford said. “Mary always said that when they built the tall obelisk that was erected over his tomb, one of the Peays [Worthen’s in-laws] said, ‘Well, that is as near heaven as Brother Booker will ever get.’”

A city ordinance adopted in April 1843 prohibited interments at any locations other than Mount Holly, so the cemetery contains a diverse collection of citizens, and Mary Worthen worked diligently to gather information on as many of them as possible.

Their stories and recipes make Recipes in Perpetuity part cookbook, part history book and an all-around rollicking good read. According to Cranford, the association has sold almost all of the books, but copies are still available at the cemetery and select locations in Little Rock.

Mount Holly Cemetery has been dubbed the Westminster Abbey of Arkansas because of its beauty and the range of notable citizens buried in it. According to the cemetery’s website, residents include 11 Arkansas governors, 15 state Supreme Court justices, four Confederate generals, seven United States senators and 22 Little Rock mayors. Other residents include prominent doctors, attorneys, military heroes and veterans from all wars beginning with the Revolutionary War.

Recipes in Perpetuity contains stories about a wide range of people, including:

Want to know the name of the first person buried at Mount Holly? The answer is in the book, along with the story of how his burial occurred before the cemetery was officially open for business. Readers also can learn why Dr. Isaac Folsom’s name has been included on every diploma issued from the state’s medical school since 1892 and exactly what a “Tussie-Mussie” is. All thanks to the Mount Holly Cemetery Association.

According to the Encyclopedia of Arkansas History & Culture, Chester Ashley and Roswell Beebe donated the land for the cemetery to the city of Little Rock in 1843. A group of businessmen formed a commission to oversee the care of the site in 1877. The Mount Holly Cemetery Association incorporated on July 20, 1915, after a group of women expressed concern about the cemetery’s “unkempt appearance.”

The association supports the cemetery through a variety of events, including the Mounty Holly Cemetery Picnic (which is held each spring and includes dinner, music, and a silent auction) and Tales of the Crypt (which is held on the second Tuesday of October and features students from Parkview Arts & Science Magnet High School portraying cemetery residents)

Visitors can take a free, self-guided walking tour or sign up for a number of guided tours for $5 per person, including:

The authors of Recipes in Perpetuity dedicated the book to Mary Worthen and praised her “sharp mind, wit, and unique knowledge of the history and residents of Mount Holly.” Food lovers and history buffs should thank her, too.