Mention “Minute Man” to Arkansans of a certain age and you’ll likely evoke memories of tasty hamburgers and happy times.

Photographs Courtesy of UALR Center for Arkansas History and Culture

[dropcap]The[/dropcap] original Minute Man — on Broadway in downtown Little Rock (photo at top) — was a hot spot for decades, a perfect choice for a family to dine on a Friday night, to take a youngster for an after-school treat, or as a destination for shoppers to recharge during a shopping trip to the city.

Some Minute Man loyalists can even recall their favorite menu items by their numbers, one of the more popular items being the No. 2, a burger with hickory smoke sauce. Those same folks may savor the memory of the deep-dish fruit pies, heated in the restaurant’s “RadaRange,” an early version of the microwave oven.  They also can likely recite the slogan that played off the company name: “It only takes a minute, maaan!”

Minute Man was a pioneer. It introduced Arkansans to microwave ovens and to fast food in general. It soon grew into a chain, peaking in the 1960s and 1970s with more than 50 restaurants. Today, only one of the establishments remains.

Testaments to Minute Man memories can be found in replies to a recent query posted to a Facebook page dedicated to Little Rock’s past. A query asking who could remember the original Minute Man had, at last count, received more than 250 “Likes” and about 100 comments. Comments like these:

Minute Man was founded by Wesley Torrence “Wes” Hall of Little Rock and three partners. Much information about the restaurant chain can be found in the Wes Hall Papers, which are archived at the University of Arkansas at Little Rock Center for Arkansas History and Culture, housed in the Arkansas Studies Institute in the River Market area. 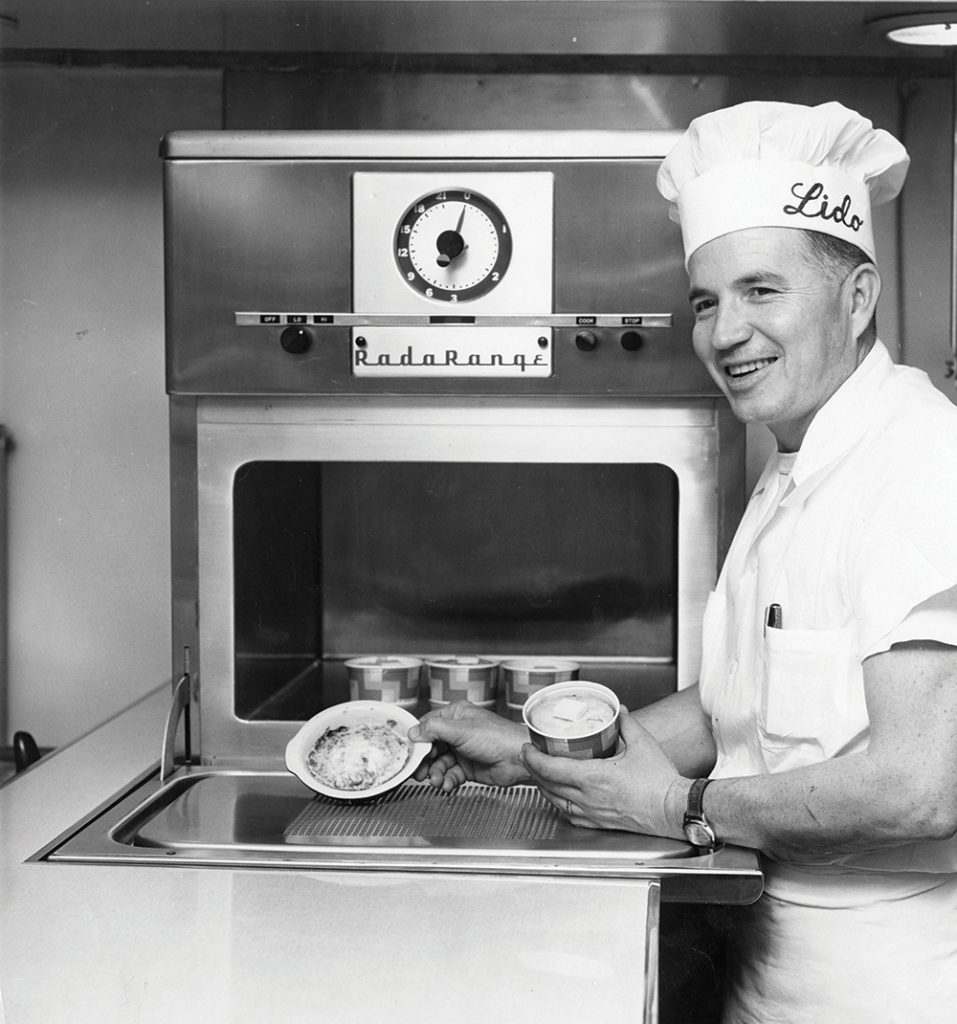 The papers include photographs, promotional materials and newspaper clippings. What follows are gleanings from Hall’s papers and information from the online Encyclopedia of Arkansas History & Culture.

The operation began on May 26, 1948, when Hall and three partners — Alton Barnett, Oliver Harper and Walter Oathout — opened a 24-hour coffee shop at 407 Broadway Street. It was known as the Lido Minute Man.

By this point, Hall was well versed in the food business. A 1933 graduate of Little Rock High School, now Central High School, he worked for three years for Little Rock’s first supermarket, the Food Palace, while studying accounting part time at Draughon Business College. Beginning in 1936 he worked six years for Kraft Food Co., initially in accounting and then in sales. With America’s entry into World War II, Hall volunteered for the Army and served in the infantry. After the war, Hall went to work for Lido Enterprises, a cafeteria and restaurant company, until 1951; in the meantime he went into the Minute Man partnership. 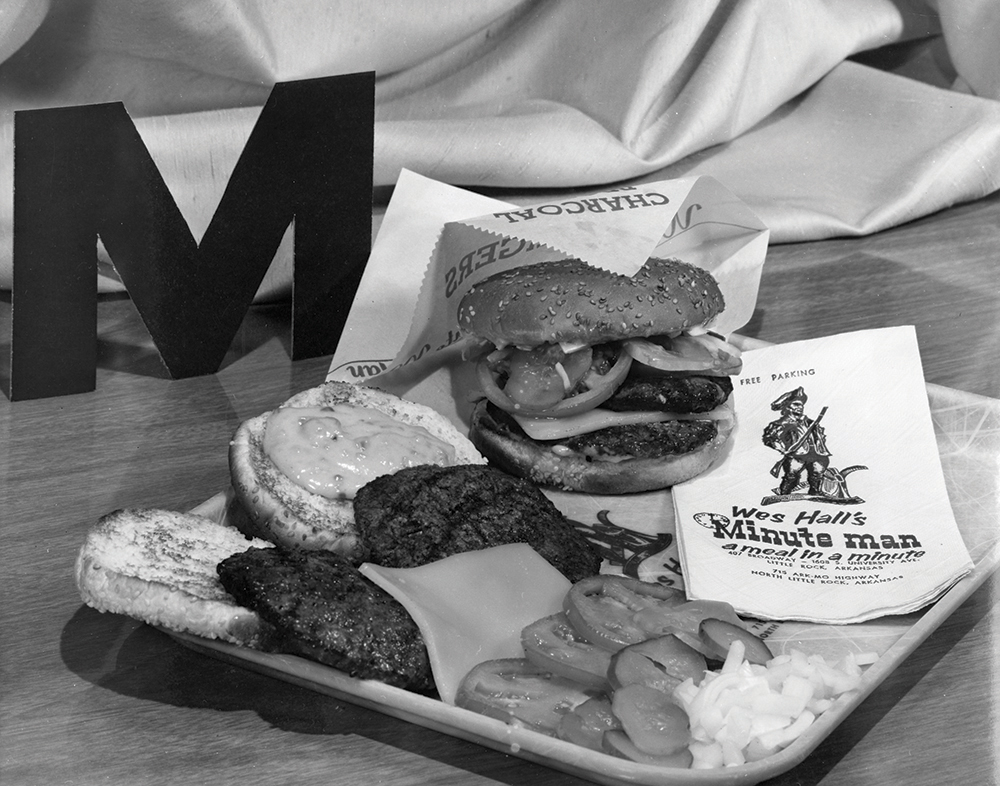 During Minute Man’s first year of operation, the owners installed an experimental machine known as a RadaRange microwave oven. Hall had discovered this invention, developed by the Massachusetts-based Raytheon Co., during a business trip to Chicago. The Little Rock restaurant was, at the time, one of only three locations in the country to employ this revolutionary device.

In 1956, Hall bought out his partners and converted the coffee shop into a fast-food hamburger restaurant, naming it Wes Hall’s Minute Man. A large sign out front featured a likeness of the Revolutionary War Minute Man statue at Concord, Mass., and the slogan: “A meal in a minute.”

Hall’s company became known as Minute Man of America. And it grew. In 1968, the company went public, trading on the NASDAQ exchange as MMAN. At its height, the company had 57 restaurants in Arkansas and seven neighboring states.

Hall not only introduced microwave cooking in Arkansas, he’s also credited with some groundbreaking marketing strategies. These strategies include coining the slogan “old-fashioned hamburgers,” to which Wendy’s bought the rights, and being the first fast-food restaurant to offer a specialty meal for children, the Magic Meal, for which Burger King bought the rights to use the name and concept in 1982-83.

Perhaps part of the secret to Hall and his restaurants’ popularity can be found in handwritten notes he made for a 1966 managers meeting. Among the points he made: “[The] customer has a choice. … Service-type work takes dedication. … Anyone with money can build a restaurant. … People make it go.”

A Memory Held Near and Dear

Among the many items in the Wes Hall Papers is a menu from 1966 that lists burgers ranging from the simple No. 1, served with relish sauce and onion, to the fancy No. 12, also known as Big M-Gourmet Burger, described as having “two big patties” accompanied by a slice of American cheese, relish sauce, chopped onion, pickles and tomato slices. The No. 1 went for 35 cents, the No. 12 for 69 cents, about $5 in today’s dollars.

The papers also contain a copy of Minute Man’s bouncy jingle, which went like this: “There’s no bigger better burger and no better eating either and you get it in a minute from your friendly Minute Man.”

Despite the popularity of Minute Man fare, business got tough.

In a 2002 column, the late Arkansas Democrat-Gazette business columnist Leroy Donald wrote: “By design, Hall opened or franchised only in Arkansas or surrounding states, limiting himself to a 400-mile radius.” He added: “McDonald’s, Wendy’s, Burger King and others became the giants in the fast-food industry.”

Donald explained that in the 1970s “the franchise boom that had gripped the country turned sour almost overnight.”

According to Donald, “The worth of a share of Minute Man of America stock plummeted. By 1975, the company was reporting a loss.”

Hall sold his controlling interests in Minute Man and three other companies in 1981 and pursued other business ventures until he retired in 1991.

He died May 8, 2002, at the age of 87. Donald’s column appeared shortly after Hall’s death and shortly before Little Rock’s last Minute Man closed. By this time, the original Minute Man had been demolished to make way for a bank building — Regions Bank occupies the space today — and been replaced by one built diagonally across the street, at the corner of Fourth Street and Broadway. The latter restaurant was closed May 31, 2002, to make way for an expansion of the federal courts building.

That sole surviving Minute Man? It’s in south Arkansas, at 318 Main St. in El Dorado, a short distance west of the courthouse square. The restaurant has been owned by Linda McGoogan since 1984. It’s open 11 a.m. to 6 p.m., Monday through Friday, and it is closed on weekends. On a recent trip to the area, this reporter had to stop in, and is happy to report that the No. 2 is still just as tasty as it ever was.

Country Music: Real Deal, Straight-shootin’ Lance Carpenter Tells it Like it is
December 26, 2020
Go to Top
Never Miss An Issue!