While the American Civil War raged, another kind of war was waged in Arkansas’ capital city.

Photography by Sonny Rhondes and courtesy of Melissa Gibbs

[dropcap]It[/dropcap] was a newspaper war, and the publishers attacked each other in a vicious battle of words. One of those publishers was Calvin C. Bliss, whose life is worth a look because of his role at a critical juncture in Arkansas history.

Born Dec. 22, 1823, in Calais, Vt., Bliss was the first of four children in a farm family. He attended Hamilton Literary and Theological Institution (now Colgate University) in New York for a while but left in 1847, according to the Encyclopedia of Arkansas History and Culture, “most likely with others who left when faculty forbade abolitionist activities.”

In 1854, he married a teacher, Caroline “Carrie” Eastman, in Bradford, Maine. The next day they set out for Arkansas. According to the encyclopedia, “they established a school for ‘misses,’ in West Helena (Phillips County) with Bliss as principal and his wife as teacher.”

The couple moved a few years later to Independence County, specifically Batesville, where he worked as a land agent and owned a 56-acre farm. 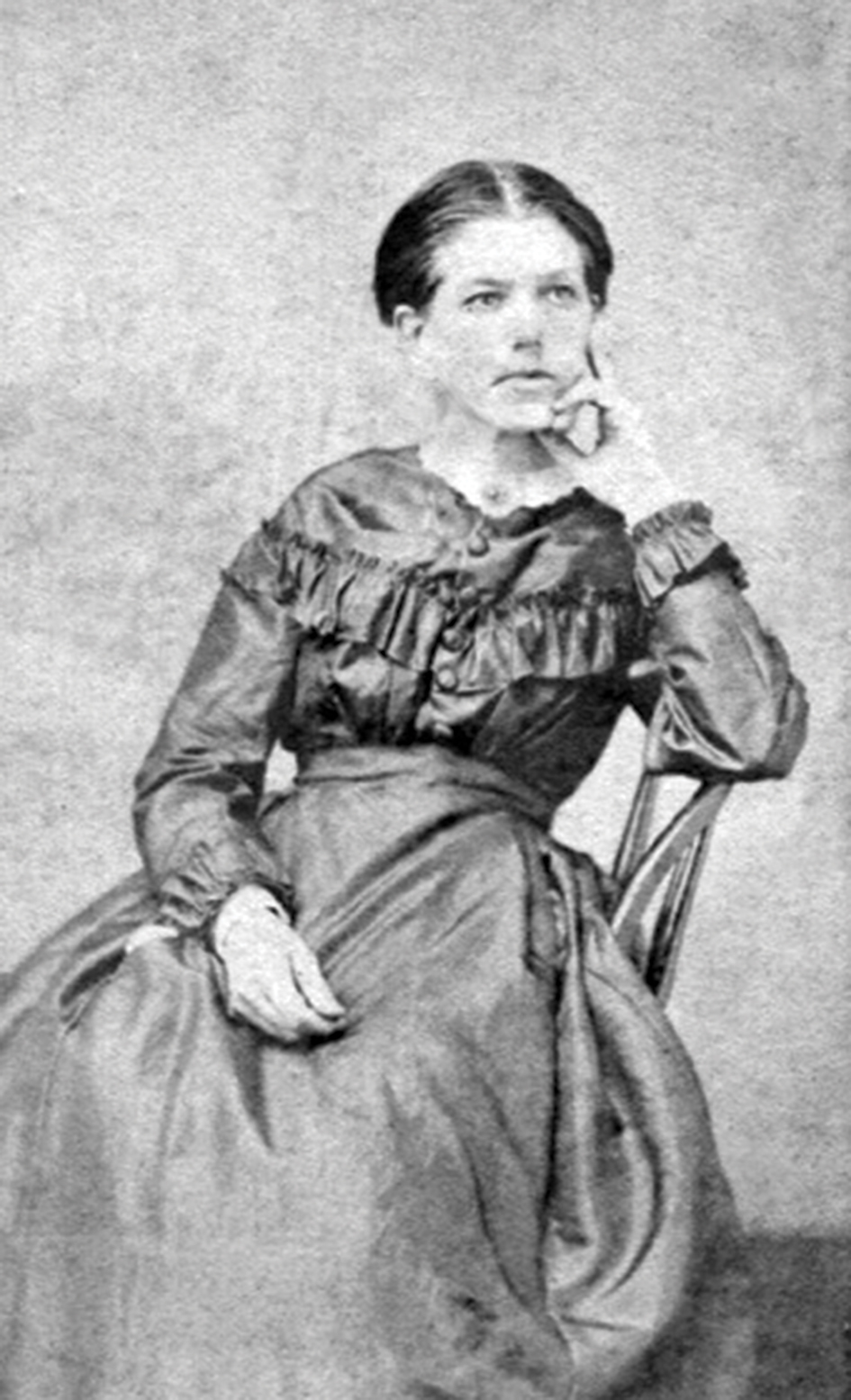 After the war began in 1861, Bliss joined with others loyal to the Union to become part of the First Battalion, Arkansas Union Infantry. He was commissioned a first lieutenant. Bliss’ unit was a sad one, judging by the encyclopedia’s description:

“Its members were always in ill health — due to poor food, medical care and sanitation — and thus saw no combat.” By the end of 1862, the encyclopedia states, about 150 of the original 365 enlisted men and officers had died of disease.

In 1863, with her husband away, Carrie Bliss figured it was unsafe for her family to continue to live in Batesville, so she headed north. With her were her two small daughters, a sister and several other family members. They crossed the Ozarks and made it to St. Louis, Mo., then returned to her parents’ home in Maine.

One of the children, an infant named Julia, died on Nov. 20, 1863. Calvin Bliss did not receive word of his daughter’s death for more than a month.

By this time Little Rock was under federal control, Union troops captured the city in September, and plans were underway for a constitutional convention to replace Arkansas’ 1861 Confederate constitution. Bliss was selected as Independence County’s delegate to the convention.

Gathering in January 1864, the delegates basically replaced the Confederate constitution with Arkansas’ original constitution, modifying the earlier document to outlaw slavery. The delegates also elected a slate of provisional state officials, pending a general election in March. Bliss was named provisional lieutenant governor, and then was elected to the permanent post on March 14.

Soon Bliss ventured into the newspaper business, eventually becoming editor and proprietor of the Unconditional Union. It was one of two pro-Union weeklies operating in Little Rock since the Federals had taken control. 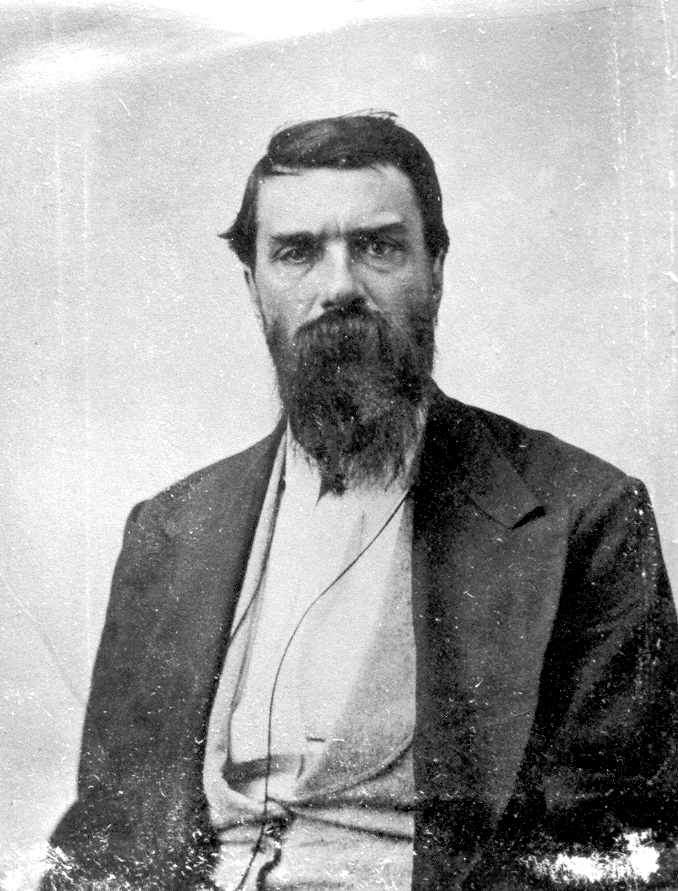 On the newspaper’s front page, just below the name, was this slogan: “The Federal Union Must and Shall Be Preserved.”

The Unconditional Union’s rival was The National Democrat, published by Dr. Cincinnatus V. Meador, which touted itself as being dedicated to “defending the old landmarks of Democracy, and the perpetuity of the Federal Union.”

With Bliss at the Unconditional Union’s helm, the rivalry between the two newspapers “became a grim battle for survival,” wrote Margaret Ross in Arkansas Gazette: The Early Years, 1819-1866.

The two publishers pulled no punches. Meador called Bliss “a land shark from Batesville who had ruined many a good Union man.” He referred to the rival newspaper as the “Ill-Conditioned Union.” Similarly, he referred to his rival as the “Imperfect Bliss.”

Bliss employed a powerful tactic: turning Meador’s own words against him. Among other things, Bliss reprinted excerpts from a letter Meador wrote to a Little Rock newspaper in 1862 to seek support for Confederates fighting under Gen. Sterling Price in Missouri.

Here’s one of the excerpts: “The salvation of Missouri depends upon the success of Sterling Price.” Here’s another: “Every man in Arkansas able to bear arms should fly to the rescue.” And yet another: “What would our citizens do if the abolition army should invade our state? Each man capable and loyal to his country would rush to his own defense with the best weapons and supplies possible.”

Bliss concluded: “The Rebel Surgeon as he was in 1862 differs very little from Meador as he is in 1864.”

On May 9, 1865, the same day Pres. Andrew Johnson declared an end to the Civil War, Meador announced his retirement from the newspaper business. He was now a candidate to represent Arkansas’ Second District in the U.S. Congress.  He was defeated in an election that fall.

[dropcap]Once[/dropcap] the Civil War was over, reuniting his family was a priority for Bliss, according to the Encyclopedia of Arkansas History and Culture. In August 1865, he journeyed to Maine and brought his family back to Little Rock. He used his paper’s resources to try to find his brother, James, of Chicot County, who had been taken prisoner while fighting for the Confederacy and had not been heard from for months. Near the top of Page 2 in the June 15, 1865, Unconditional Union, Bliss published an appeal for information about his brother’s whereabouts. “Anyone giving information concerning him will confer a favor upon his parents and friends,” the appeal stated.

Later correspondence between the Bliss brothers, the now-brittle letters stored in Arkansas History Commission archives, attests that the brothers were indeed reunited.

Bliss continued to publish the Unconditional Union until early 1866. That’s when his newspaper office burned while he was in Washington, D.C., on state business. He continued to serve as lieutenant governor until the office was eliminated by yet another state constitution in 1868. (Arkansas’ current Constitution dates to 1874.)

Like other families in the war-ravaged South, the Bliss family appears to have had their share of struggles. He worked in real estate, and the family took in boarders to keep things going, but they were beset by financial problems stemming from real estate speculation. Then Carrie Bliss’ health began to decline. She died in September 1881. 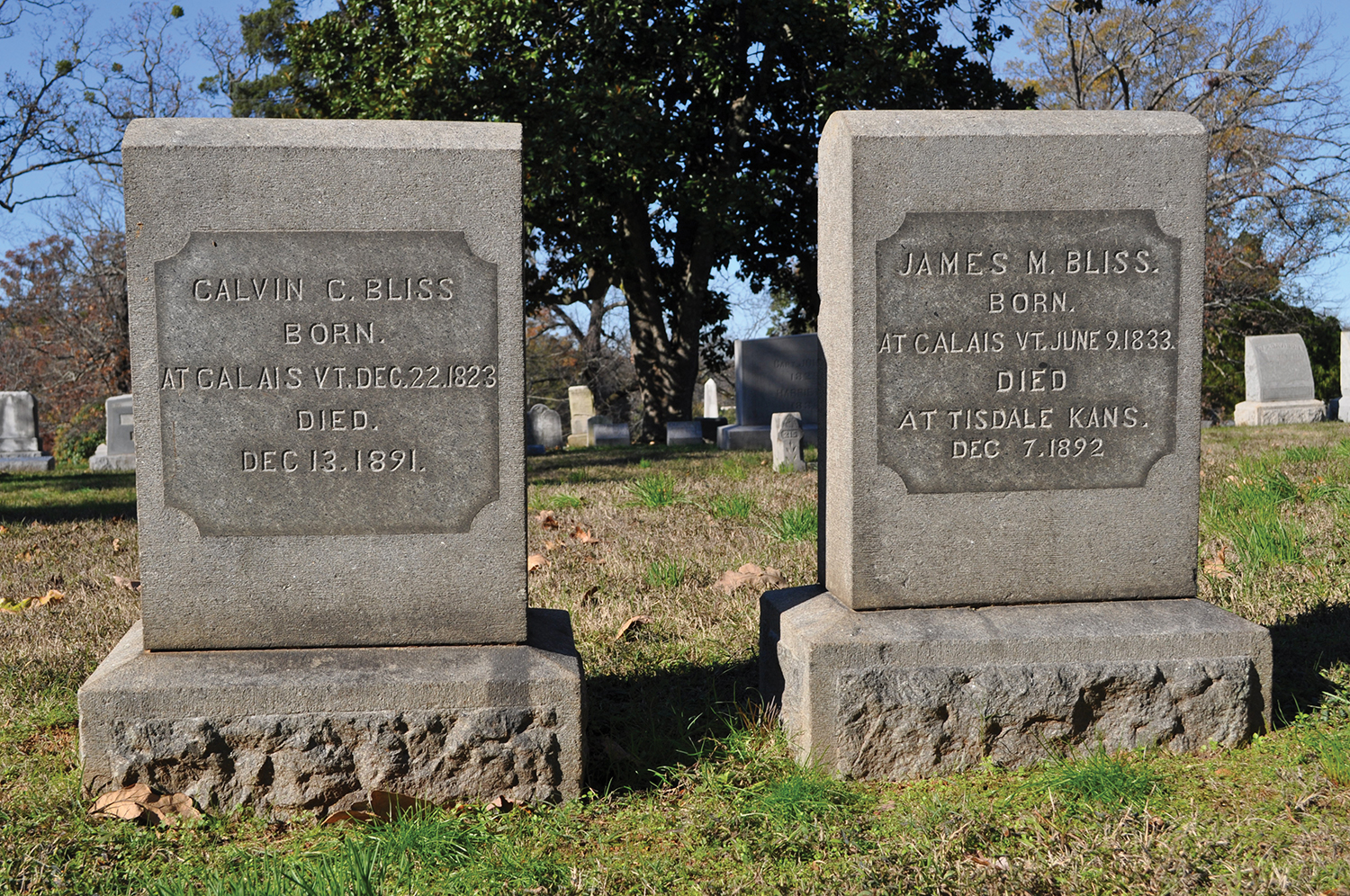 the gravesites of Calvin and James

A few years later, Bliss and his children — another daughter, Addie, had been born in 1869 — moved to Sweet Home, just south of Little Rock. He taught school there and grew strawberries. He died on Dec. 13, 1891, just short of his 68th birthday. He and Carrie Bliss are buried in Oakland Cemetery in east Little Rock.

While he experienced travails, Bliss seems to have been an optimist. This attitude can be seen in a New Year’s editorial in the Unconditional Union. Here’s part of the editorial:

“A happy New Year! By how many thousand tongues, around the earth, whose natal day it is, has this sentence been uttered; and with what tones, and under what varied circumstances of prosperity and poverty, of joy and grief, have these ‘compliments of the season’ been passed to-day [sic]. Perhaps, throughout the world, no other nation or people have such ground for hope and happiness as this. During the past four years we have been engaged in a contest which, in bitterness and magnitude, has never been surpassed… .

“How happy should this people be, to whom peace, liberty, unity, and prosperity again return. May we all enjoy many such New Years.”