A well-known American product is celebrating its 75th anniversary.

[dropcap]It’s[/dropcap] the Red Ryder BB gun, which occupies a lofty place in the pantheon of Christmas gifts. A testament to this iconic status can be seen in the 1983 movie, A Christmas Story, which usually is broadcast in marathon showings around Christmastime.

What may not be quite so well known is that the Red Ryder, as well as a long list of other airguns and airgun accessories, has an Arkansas connection that goes back nearly 60 years. The guns are made by Daisy Outdoor Products, known as the world’s oldest marketer of airguns, which has had its headquarters in Rogers (Benton County) since 1958.

Here’s a little about Daisy, the Red Ryder and other products, based on a visit to Rogers’ Daisy Airgun Museum and conversations via phone and email with Joe C. Murfin, Daisy’s vice president of public relations. Murfin, who’s also the chairman of the board of the nonprofit museum, authored the book Daisy: It All Starts Here and has written articles about the company and museum for the Encyclopedia of Arkansas History and Culture.

Discussing the Red Ryder’s iconic status and the reasons behind it, Murfin said, “The right to bear arms and the enjoyment of hunting and the shooting sports are a part of America’s rich heritage. Handing down those traditions is important to families. Just about everyone takes his or her first shot with a Daisy BB gun that is given to them by a parent. For many of them, that BB gun is a Daisy Red Ryder — because it’s the one their parents, grandparents and great-grandparents had. Because of its multi-generational appeal and because of its role in preserving these important traditions, the Daisy Red Ryder may be, in fact, one of the most important guns in the world.”

To note the Red Ryder’s 75th anniversary, the company has produced a special edition, with birch or maple stock forearms, laser-engraved artwork, and a gold-tone forearm band. Among the places it can be bought is the museum, situated at the cobblestone intersection of Second and Walnut streets in the heart of the Rogers Commercial Historic District. True to its name, the museum offers handsome displays of all things airgun, ranging from ancient weaponry to advertisements to the origin of the Daisy name. There is, of course, a display about the Red Ryder and that movie, which focused on young Ralphie Parker and his quest to convince his parents to get him one of those prized guns for Christmas.

On a fall Saturday afternoon, two visitors entered the museum at 202 W. Walnut St. and learned about the Red Ryder, the company and airguns in general.

The company actually began as a windmill maker in the Detroit suburb of Plymouth in the late 1800s. Earlier, windmills had been made almost exclusively of wood, but a local watch repairman named Clarence J. Hamilton developed and patented an iron windmill. The Plymouth Iron Windmill Co. was incorporated on Jan. 9, 1882. One day in 1888, Hamilton, who was by this time a member of the company’s board of directors, brought in a prototype of an all-metal airgun he had developed. When the gun was fired, the story goes, a company official exclaimed, “Boy, that’s a Daisy!” That meant it was first-rate. 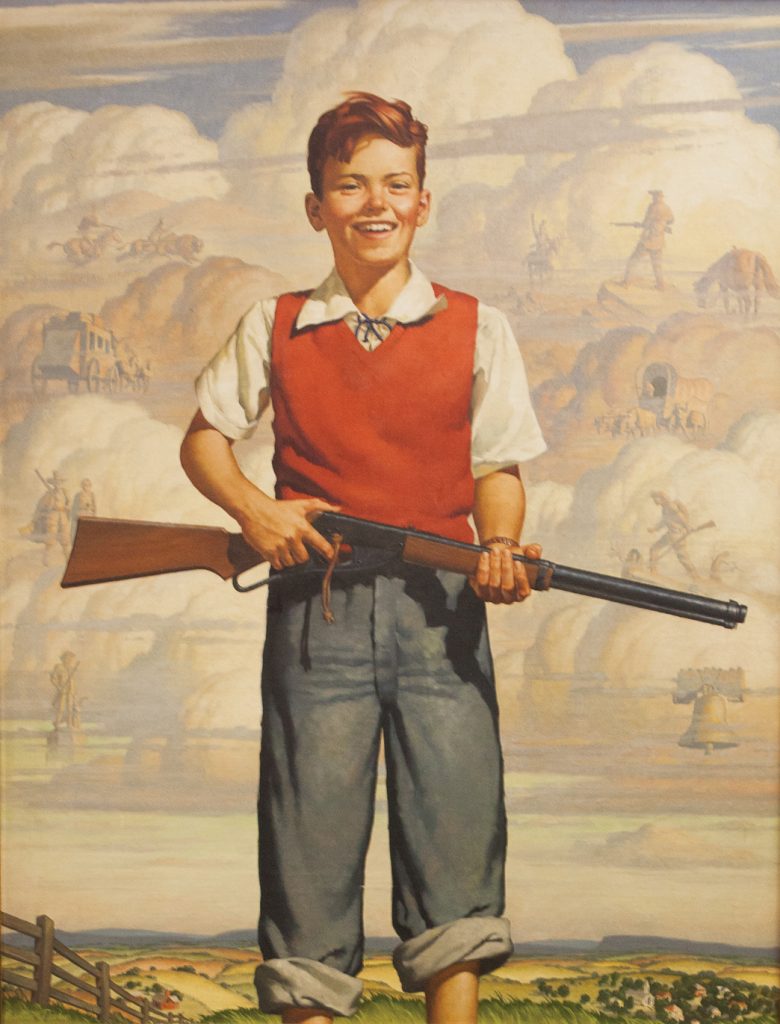 the photograph from Daisy’s American Boys Bill of Rights

By 1890, the company produced nearly 50,000 of the guns a year. In 1895 it ceased producing windmills, changing its name to Daisy Manufacturing Co., and, in seeking a central location with room to grow, Daisy relocated from Michigan to Arkansas in 1958.

Near the company history exhibit is a display noting that airguns go back much further than the late 1800s. This exhibit includes artifacts that date to the Netherlands and Germany in the 1600s and 1700s. Signage describes an air rifle that was carried on the Lewis and Clark expedition of the early 1800s: “Captain Lewis would fire the air rifle at every meeting with the Native American tribes along the expedition in order to impress them with the technology and foster cooperation.”

The familiar sounds of A Christmas Story, the scene where Flick, one of Ralphie’s buddies, gets his tongue stuck to a frozen flagpole, draws one of the visitors to the Red Ryder display.

So, who was Red Ryder? He was a Western hero in a highly popular newspaper comic strip that began in 1938. The character went on to be the subject of radio programs, books and movies. Red Ryder was just one of a number of heroes — others included Davy Crockett, Zorro and Annie Oakley — for whom Daisy named airguns.

But it was the Red Ryder that writer Jean Shepherd chose to immortalize as the object of Ralphie’s desire in a short story that led to a modern movie classic.

Chapter 5 of Murfin’s Daisy: It All Starts Here is titled “Ralphie Got It Wrong.”

The book recounts how Ralphie asked his parents and Santa Claus for “an official Red Ryder carbine-action 200-shot range model air rifle with a compass in the stock, and this thing which tells time.” 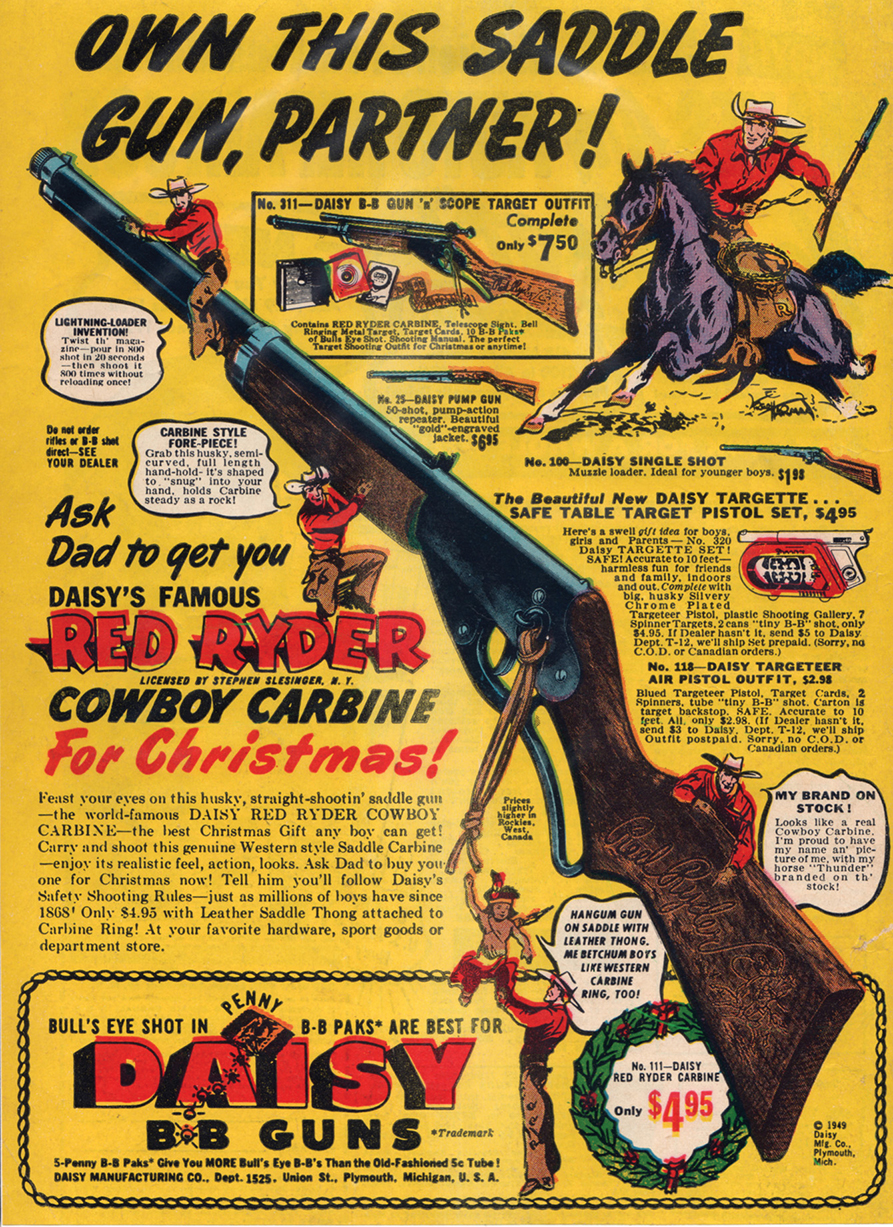 The thing is, the Red Ryder did not have a compass or a sundial. That was the Buck Jones model, named for a popular Western movie star of the 1920s, ‘30s and ‘40s. He died in 1942 at age 50 after a fire at a nightclub in Boston, Massachusetts.

Murfin recounts how, in 1983, Metro-Goldwyn-Mayer produced A Christmas Story based on material from two collections of Shepherd’s short stories and unpublished stories from a radio show Shepherd had. “Failing to convince the production company that the script should be changed,” Murfin wrote, “Daisy agreed to inset a compass in the stock, silkscreen a sundial on the stock and add a copper forearm band and a copper front sight band to three guns to be used as props in the movie.”

One of those prop guns is part of the Rogers, Arkansas, Daisy Airgun Museum’s A Christmas Story display. Other items in the display include a movie poster and a black and white photo of Daisy employees attending a premier of the movie in Rogers.

Based on the film’s popularity, Murfin wrote, “Daisy committed to produce the Red Ryder with a compass and sundial in the stock for the balance of 1983 and 1984.”

The company again produced a limited number of Red Ryders like the 1983-84 model in 2003 and 2008 to note the model’s 20th and 25th anniversaries, marketing the guns solely to collectors.

Other versions of the Red Ryder include a Razorback Red Ryder, the result of a 2012 partnership between Daisy and the University of Arkansas at Fayetteville. It features a Razorback mascot on its stock.

Murfin calls the Red Ryder “without doubt, the most famous and recognizable BB gun in the world.”

Who could argue? What other BB gun is so prominently featured in a Christmas movie classic?