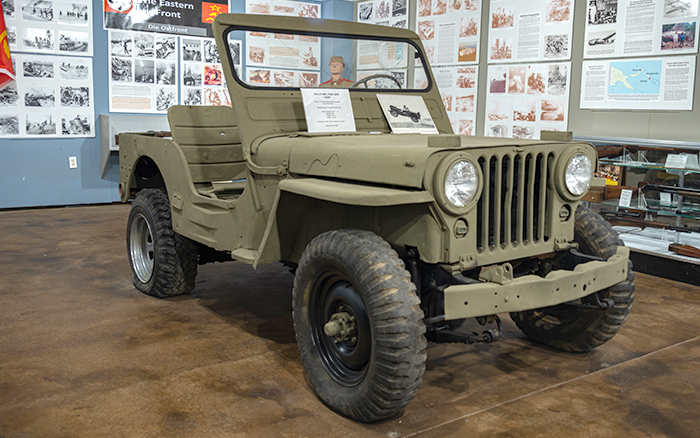 November marks National Veterans and Military Families Month and includes the holiday of Veterans Day. AY About You thanks all of our veterans and their families for their selfless service to our country.

Harold Johnson used to sit on the wings of trainer airplanes parked in his front yard at the former Walnut Ridge Army Air Field base in 1946 and dream of flying them when he was a child. Now, seven and a half decades later, Johnson is the director of the Wings of Honor Museum on the former airfield, and he and his staff of volunteers are committed to preserving the memories of those who trained at the base and fought in battles from World War II through the Gulf War.

Johnson and his family lived in a duplex on the former base just north of the Lawrence County town of Walnut Ridge while his father attended nearby Southern Baptist College (now Williams Baptist University). Although the base that had trained 18 classes of Army pilots had closed in 1944, hundreds of airplanes remained at the field, and military officials planned either to sell the equipment or chop the planes and melt them in smelting ovens.

At age 9, Johnson would climb up on the Advance Educator aircraft right outside his family’s front door and pretend he was flying them in combat; it’s where he gained his love of all things military.

Tucked in a corner of the field, which now serves as the Walnut Ridge Municipal Airport, the 14,400-square-foot Wings of Honor Museum is one of northeast Arkansas’ hidden treasures that, once found off of U.S. 63, stuns visitors with its details and displays. U.S. Sen. John Boozman calls it one of the best military museums in the South and, before the pandemic, scores of school children would visit the facility to learn of the area’s involvement in the wars. 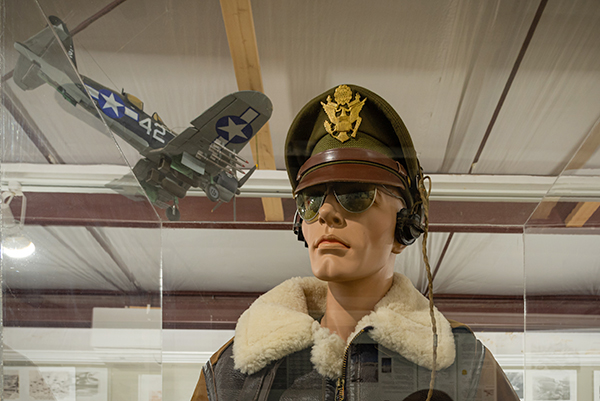 “I fell in love with the airfield,” Johnson says. “Now, this is home.”

It really is home for Johnson. He’s there seven days a week, eating his meals in a small kitchen and spending much of his time researching old flight school annuals and rosters to learn more of those who went through the training courses.

“I think people realize the importance of this place to the success of World War II,” Johnson says. “Only about two or three percent of all pilots were trained here, but we feel they were extremely important in the contributions to the war effort.”

The air training field almost had a different home when the U.S. government sought a location for a new school in the South. Officials planned to build the center near Halls, Tenn., in early 1942 but discovered they’d have to move several cubic tons of dirt to level the field. On a scouting trip of the mid-south, they flew over the Walnut Ridge area and saw the potential. 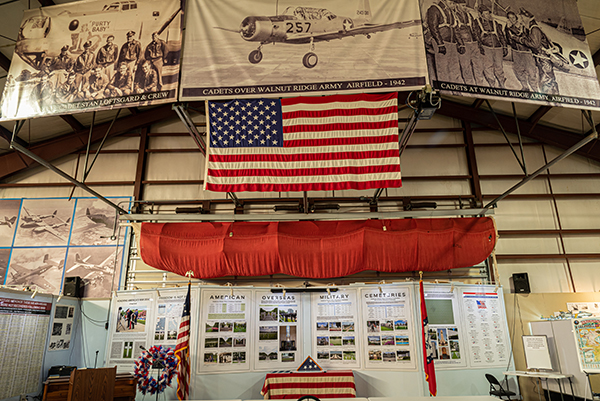 In a rare occurrence, the government moved quickly with a plan. On April 1, 1942, the U.S. Army Corps of Engineers said the Walnut Ridge site was a good choice. Two weeks later, officials at the Southeast AAF Training Command center in Montgomery, Ala., received a report on the site. Within 10 days, the Walnut Ridge base was approved, and on June 20, 1942, the Corps began building three 5,000-foot runways.

The first training class began on Aug. 15, 1942, as Army soldiers learned to fly with Vultee BT-13s, small, agile, single-engine aircraft. During the 22 months of its operation, the base trained 5,310 pilots with 4,651 graduating. Forty-two students and instructors were killed in training accidents there.

In September 1944, the Marine Corps moved in briefly before the base became a temporary prisoner of war camp for 160 German prisoners who were captured in northern Africa and housed in barracks in Walnut Ridge. The prisoners helped farmers plant crops before leaving in December 1945. 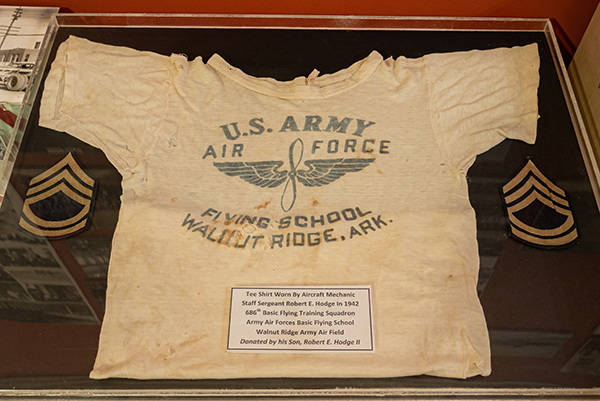 The base then became a storage facility for aircraft until 1946 when the Texas Railway Equipment Company moved in and began salvaging 4,871 fighters and bombers for two years. It was the second-largest salvage operation in the U.S. behind a similar facility in Kingman, Ariz.

The base also served as a flight service station from 1948 to 1969 and the U.S. Air Force used it as a warning squadron, monitoring Cold War activities by early radar devices from 1956 to 1963.

“This has such a rich history,” Johnson says.

It wasn’t until 1999 that Johnson and other members sitting on the Walnut Ridge Municipal Airport Commission began thinking about creating a museum. A former soldier from Montana who trained at the Army base stopped at the airport and asked if he could look around, more than 50 years after he graduated from the flight school. That became the catalyst. 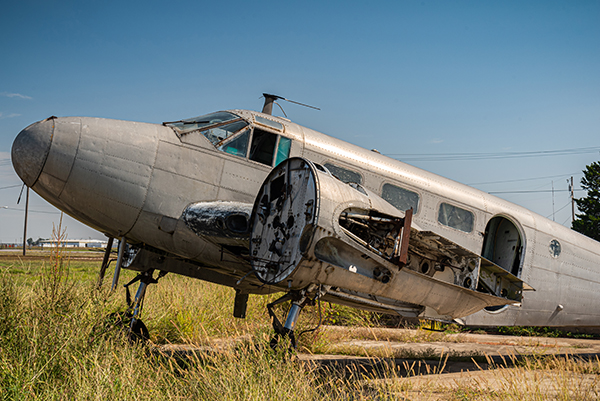 Ancient artifacts abound both inside and outside the museum.

“We figured more would want to see,” says Frank Wilson, who borrowed photographs of the base taken by a high school friend in 1942.

That was the beginning of gathering material for the museum.

Johnson and Wilson opened a small museum in a former hangar near one of the runways; one of the main attractions was the hull of a Vietnam-era helicopter.

Johnson began searching eBay and contacting area veterans for any photos and memorabilia they may have. 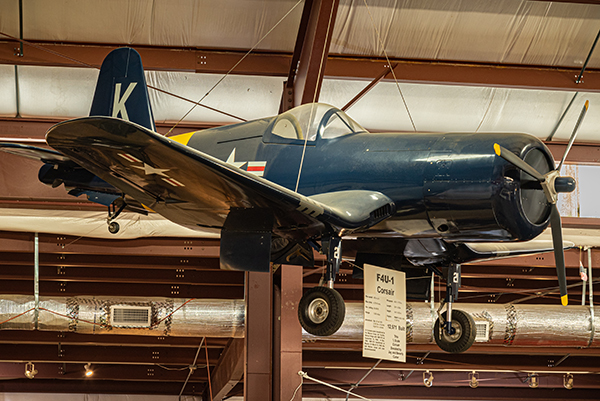 An F4U-1 Corsair at the museum.

They built the present location in 2006 and later added a section for World War II exhibits and an area to build displays.

“I put up every wall there,” Wilson says. “We were just trying to make notice of the war and the soldiers’ service. I think we did pretty well.”

Upon entering the museum, which sits across from the airport’s terminal in a metal building, visitors see an area used for lectures. A large model of the airfield with its three runways forming a triangle and several buildings sits near the entrance. A mannequin dressed in combat fatigues greets people as they enter what Wilson calls the “maze” of walls that lead them through the war’s history. 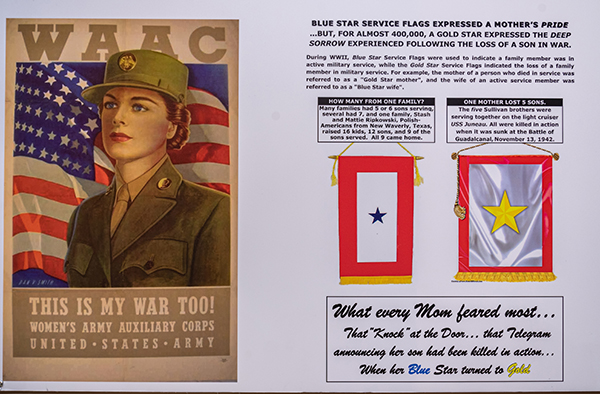 One wing is devoted entirely to the flight school; aircraft manuals, pieces of training plane radars and radios, uniforms and equipment, hundreds of photographs, maps and narratives all line the walls. Several video screens show movie loops of pilots training, a documentary about the base’s history and, later, the cutting up of the planes.

Another wing lists Arkansans killed in the war and more photographs. One picture shows Johnson standing atop one of the training planes outside his home.

A large model aircraft hangs over a jeep in an area devoted to the Vietnam conflict and a working engine from one of the BT-13s, of the training planes, sits near the lecture area. A conference room contains hundreds of military books and filing cabinets full of airbase yearbooks, more photographs and training rosters.

It’s an impressive display of more than 5,000 items and Johnson says he has enough additional materials to double the museum’s display. 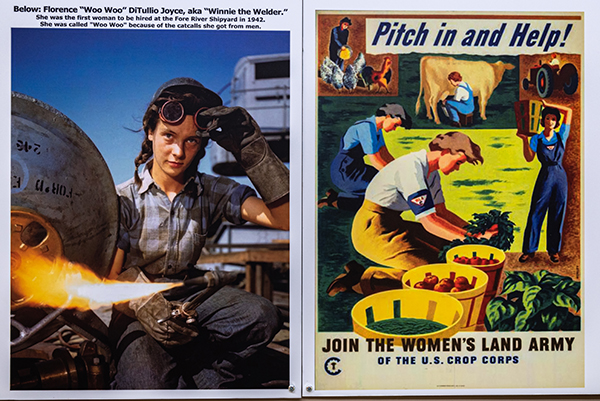 Because of the pandemic, the museum now has scarce traffic. Before, hundreds visited it each month.

“It’s a huge asset,” says the mayor of Walnut Ridge, Charles Snapp, a proponent of the tourism dollar who turned a 30-minute stopover at the airport by The Beatles in 1964 into a yearly festival. “It’s an overlooked asset that locals may not appreciate. Before COVID, we had motor coaches coming in to see it.”

Boozman, who has created his veteran’s project to preserve memories of those who fought for the country in wars, has visited the Walnut Ridge museum several times.

“This is one of the better collections in Arkansas, if not the South,” he says. “It tells a story of the base and of the war. They’ve done a great job. As you go through the museum, you get a better idea of what they all went through.

“We are rapidly losing our veterans to time. That’s why this museum is so important. We’d like to do so much more to honor our Arkansas veterans.”

Johnson wishes to expand the museum and add more displays for the Gulf wars. However, like with the veterans, age is catching up with him. At 85, he’s not able to do as much as he once did. Several volunteers who helped start the museum have either passed away or had health issues that limited their assistance.

“Our good volunteers have gotten older,” he says. “I don’t know what the future holds.”

He says the Arkansas Department of Heritage could one day take it over, or those at nearby Williams Baptist University could oversee it.

“There’s so much more to display, but I think we’re doing a good job,” Johnson says. “I’m proud of it.”