Hitting the Road to See Arkansas in the Fall 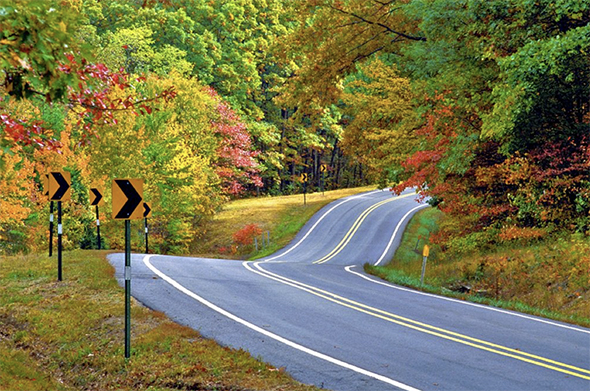 Fall is finally here and with that comes cooler temperatures and a desire to see nature.

Arkansas is blessed with an abundance of nature as that Natural State nickname is earned, not given. Here, 56 percent of the state, or 19 million acres, is forest, according to a 2015 survey issued by the Arkansas Farm Bureau.

The survey notes Arkansas contains an astonshing 11.8 billion trees and with a little more than three million people living in population, that works out to not quite 4,000 trees for every man, woman and child living here.

That’s a lot of trees and of those, 42 percent are oak or hickory and 29 percent are loblolly and shortleaf pine.

Pines are evergreens, and by their very name, indicate they aren’t the best for those looking for some color in their leaves.

The color comes from the leaves of deciduous trees and that’s where oak and hickory comes in.

Hickory tends to turn yellow, while oak can go from copper to a bright red with yellow in between.

The most brilliant red leaves tend to come from maple trees, which Arkansas doesn’t have in abundance but some are still out there and the leaves, when viewed together, paint a vivid portrait.

The portrait comes together from some very basic botany. In hot months, trees produce chlorophyll. That’s the stuff that makes the leaves green. As the months start to get colder, chlorophyll production comes to an end.

As a Washington Post article earlier in October noted, what happens next depends on the tree.

Some trees, “manufacture carotenoid, a yellow to orange pigment” that emerges when “chlorophyll slows.”

Other trees, “produce another pigment, anthocyanin, when the seasons begin to change. That is what turns forests red and orange.”

The Post article noted some must visit states and included those in New England along with the upper midwest of Wisconsin, Michigan and Minnesota, It also said, “farther south, a mix of oak and hickory forests in Arkansas provides stunning views, especially at higher elevations where there is less development.”

The United States Forest Service has an online tracker for fall foliage at, https://smokymountains.com/fall-foliage-map/, and with the usual caveats of it being a prediction, it notes the state will have its best leaf viewing starting in November with peak conditions hitting the Arkansas side of the Missouri state line on Nov, 16, and the rest of the state at near peak. A week later, Nov. 23, the vast majority hits peak viewing conditions

The window is a short one though as the following week, Nov. 30, Arkansas shifts to past peak, so if you want to see some brilliant color, you’ll need to move fast.

The best spots to see that color is Arkansas hill country with the Ozark National Forest a prime area. That forest stretches from, roughly, Hwy. 71 to the west and not quite to Hwy. 65 to the east. In between it covers 16 Arkansas counties and more than one million acres.

The Farm Bureau survey noted that Arkansas has the largest National Forest in the South, “with 2.5 million acres within the Ozark-St. Francis and Ouachita national forests.”

One of the best drives to leaves and nature in general is from central Arkansas, head to Ozark, then go north on Hwy. 23, or the Pig Trail Scenic Byway, to just past Turner Bend and then head east on Hwy. 215 to Oark before going south to eventually Clarksville.

But that’s just one suggestion. The Forest Service, of course, has an interactive online map to plan the best possible trip at, https://www.fs.fed.us/ivm/.