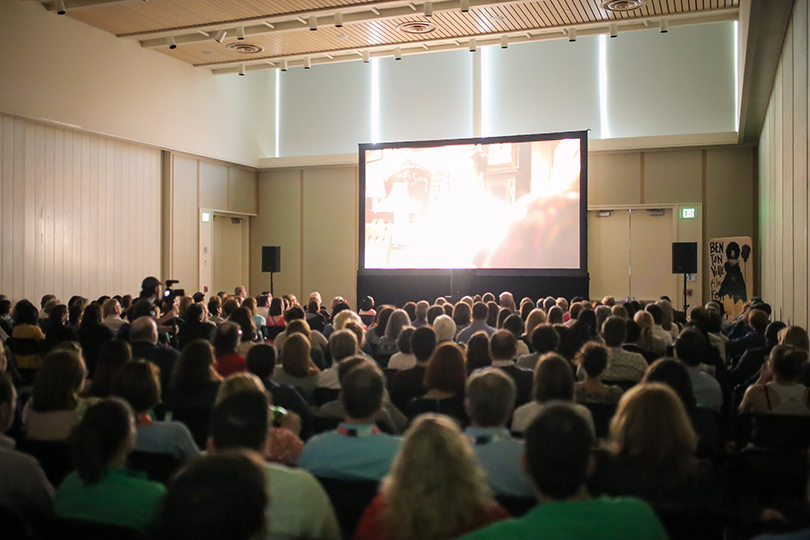 Next month, Hollywood will head for the hills – the foothills of the Ozarks, that is. The fourth annual Bentonville Film Festival, one of the nation’s most electric entertainment industry events, will kick off on May 1.
This premier event was founded in 2015 by Inclusion Companies CEO Trevor Drinkwater and Academy Award-winning actor Geena Davis – star of such films as A League of Their Own, Thelma & Louise and Beetlejuice. Their goal, with the help of founding sponsor Walmart, was to create a film festival that championed inclusion in all aspects of entertainment media.
According to their mission, the Bentonville Film Festival Foundation seeks to immediately increase diversity in the entertainment media being produced and distributed, raising the voices of those who are often underrepresented.
“There’s a movement to try and address the inequality of opportunity for women and other underrepresented groups,” says Jen Prince. Her film, Quality Problems, was a competition film in last year’s festival. “We saw announcements about the festival and read up about it. It really seemed to fit our mission with the projects we create. It also seemed like a festival that would not only be a good opportunity for our film, but for us to meet with likeminded people and network with filmmakers who are in similar projects, and experiencing similar obstacles in their careers. It seemed like it was really trying to be a festival for people who are often sidelined.
“We plan to submit everything we ever make,” she adds with a laugh. “We want to come back every year. I think that Bentonville really charmed us. The festival is a place to take stock in the progress we’re making at getting stories on the screen, from people that are often sidelined.”
To achieve their goals of championing representation for those often underrepresented, the Bentonville Film Festival Foundation partners with the Geena Davis Institute on Gender in Media. The two organizations work together to support research which proves it is commercially beneficial to support a systematic change in the way diversity and gender are portrayed in entertainment media.
“I think, as a society, we’re going through a period of readjusting to understand that the voices that have been heard most, up until now, have not been very inclusive,” says Dorie Barton, writer and director of the film Girl Flu, which debuted at the inaugural festival. “We’re opening our eyes to how many are out there. I’m a woman, a female filmmaker. My film, Girl Flu, is very much a story about becoming a woman. Half of our population – actually more – is female.
“It’s thrilling to see more and more women’s voices being heard and lifted up,” she adds. “Half of us are women. Half of the films we’re seeing should be about, or for, women. The same is true for people of color. And it goes on and on. I think it’s amazing.”
The Bentonville Film Festival will run from Tuesday, May 1 to Sunday, May 6. During that week, dozens of films, both competition and non-competition, will be featured. There will also be discussion events and appearances by stars Geena Davis, Meg Ryan and Busy Phillips. A number of the events are free to the public, including this year’s unique Marvel Experience at The Skylight. Every film from the Marvel Cinematic Universe will be shown for free of charge at Bentonville’s Skylight Cinema. Though the Marvel films will be free to the public, those who plan to attend must get a ticket from the Skylight box office, which are on a first-come, first-serve basis.
The film festival will also include a number of live musical performances, including an opening performance by rising stars Carly Pearce and Jillian Jacqueline. Throughout the week, visitors can attend performances by Vintage Trouble, Alex Aiono, Lauren Alaina
Visitors can also partake in several outdoor events that will be great for the whole family, including attractions by sponsors such as Universal, Warner Brothers, Nick Jr., and more. Characters and entertainment from shows like Teen Titans Go and Jurassic World.
To learn more about the 2018 Bentonville Film Festival, to purchase tickets or to see the whole schedule, visit bentonvillefilmfestival.com.

Jamming on Fourth of July: Where to Find the Best Music This Weekend
July 2, 2020
Go to Top
Never Miss An Issue!