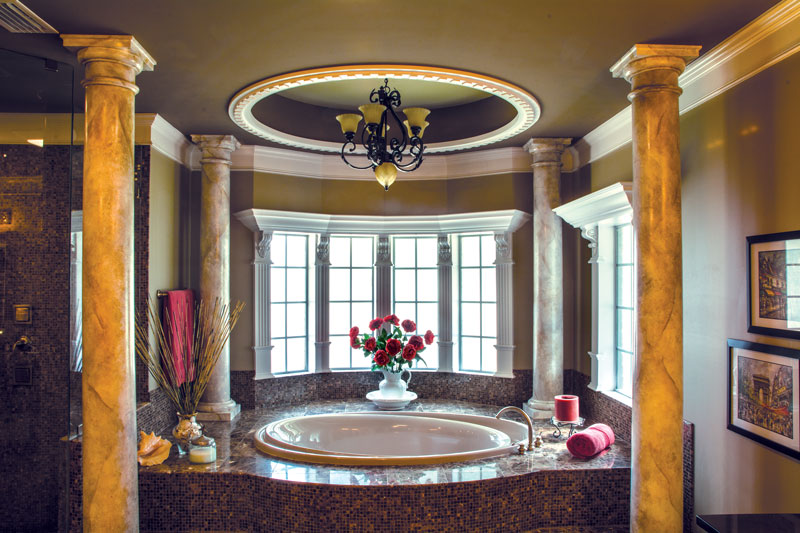 [dropcap]C[/dropcap]onway has offered both a new beginning and a walk down memory lane for Russ and Julie Pennell.

Their house on Country Club Road is just a five-minute drive from the University of Central Arkansas (UCA) campus where they met in the early 1980s, when Russ was a point guard for the UCA Bears. They came back to Conway in 2014, when he was hired as UCA’s men’s basketball coach.

The town has changed considerably since their first time living there.

“Right where we’re at was the edge of town then,” says Russ, standing in his driveway. “There was nothing east of Oak Street. They had just put in that little shopping center where JCPenney is, at the 65/40 interchange. And the university has changed tremendously. When I was at Ole Miss I had recruited a player who played in the UCA Holiday Tournament — it was a high school tournament. That was probably 1992 or 1993, but I hadn’t been back on campus until I came back to talk with Dr. Teague.”

The decision to move to Conway from Mesa, Arizona, where they lived while Pennell coached at Grand Canyon University in Phoenix, was made as a family. 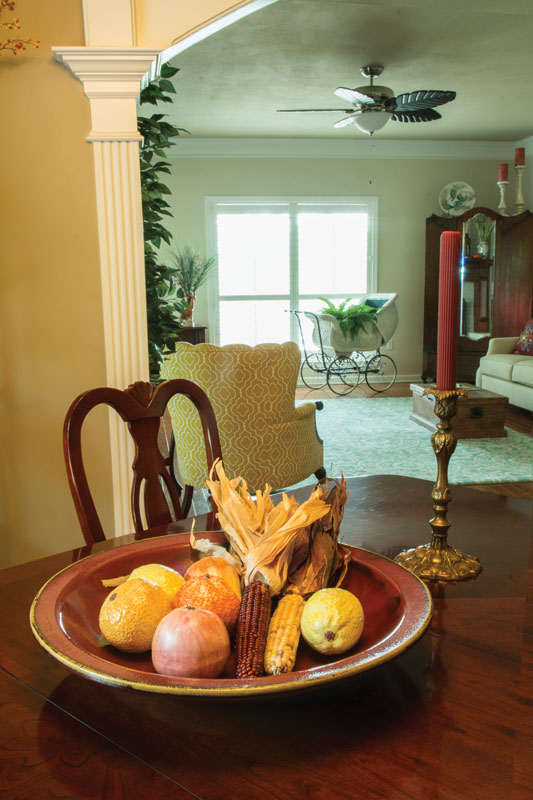 The Pennells’ dining area and living room are full of classic details.

“I think for me, personally, it was the challenge of taking UCA basketball, which had not done much since they were Division I, and trying to build the program into something that everyone could be proud of. As a former player, it meant a lot to me to do that,” says Russ. “We’re in the middle of that build now, and it’s going well. We’re moving in the right direction.”

Julie Pennell’s parents still live in her hometown, Fordyce, and she has a sister in North Little Rock.

“Arkansas is home for me,” she says. “And I think the smaller town was a draw because Phoenix is so big. Even though we lived in a suburb, Mesa is a very large city, so I think just a small-town atmosphere is a very large draw.”

Morgan is a nutrition major at UCA; Emily is a senior at Conway High School, where Julie just started teaching algebra.

“We’ve settled in great,” says Julie. “Emily was going into ninth grade and she came kicking and screaming, but she really loves it now and she’s found her niche there at the high school and has lots of good friends and she’s on the dance team at Conway High and she’s involved with Rock City Dance Center in Little Rock.”

Morgan lives off campus in an apartment a few minutes away from her parents. Knowing she wouldn’t be spending much time in the family home, she took a smaller bedroom and deferred to Emily the bigger, original master bedroom.

One wall of Emily’s room is covered with a mirror, installed by the Pennells for Emily to use when she choreographs routines for her high school pompom squad.

“She’s a national championship dancer. She was a gymnast until she was 12 — third-ranked in her age group in Phoenix,” says Russ.

After a couple of bad injuries, her grandparents convinced her to change sports.

“She was very athletic and she took that into dance,” he says.

They have made other changes to the house to fit their family’s needs, like the extra-tall butcher block serving station in the kitchen.

“We put that in. I told the guy how tall I wanted it and he said, ‘Are you sure you want it this tall? That’s taller than most people go,” says Julie. She assured him she did. “We accommodate a lot of tall guests.”

There are several quirks about the house that they have chosen to embrace rather than change. The former owner wore suits every day and had a stage installed in the walk-in closet off the master bedroom for in-home fittings. He also had glass cabinets built, measuring precisely the length needed to accommodate his clothes and his wife’s. They were both shorter than the Pennells, though.

Pennell with his wife, Julie, and two daughters, Morgan and Emily.

“I’m constantly having to steam the bottom part of my coats,” says Russ. “But that’s OK.”

Artwork done by the girls throughout the years hangs throughout the house and there are several figurines, paintings and prints of Julie’s favorite animal — the giraffe — throughout. Every fall she brings out an extra plaque. It reads: “We interrupt this marriage to bring you basketball season.”

The Pennells’ home was on the market when they arrived in town, but they opted to rent a place in Centennial Valley for a year before deciding this home was right for them. For one thing, it looks smaller from the street than it does from inside.

“It’s 5,400 square feet. It’s a monster to take care of,” says Russ, who doesn’t like the idea of having a housekeeper come in.

The dark wood floors throughout most of the house aren’t that hard to care for, he says.

“We vacuum and then take a Swiffer and go over it and then Julie has some treatment thing that we just run over it,” he says. “It cleans pretty easily.”

The house has two staircases, each leading to a part of the house that does not connect to the other. 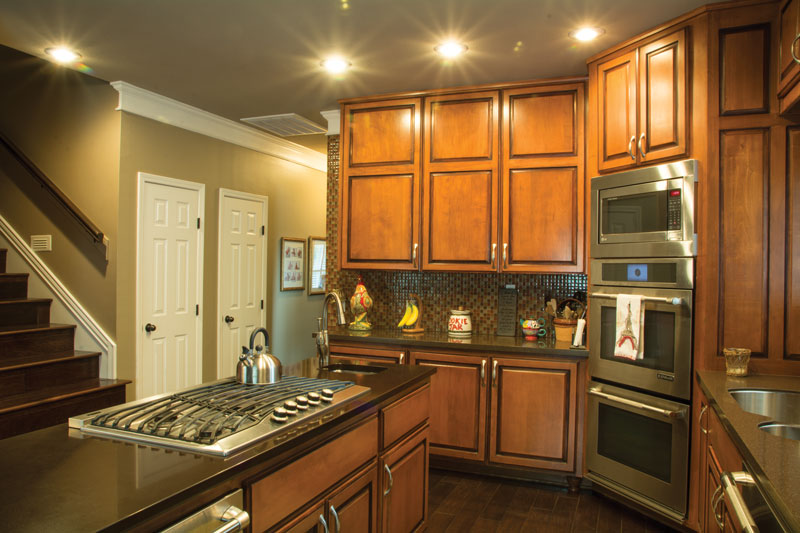 The Pennells’ kitchen is a beautiful open space. It’s the perfect spot to enjoy family meals.

“The thing that’s nuts about this house is that you can just kind of get lost,” he says. “Everyone can have their own space.”

Because basketball season stretches through several major holidays, including Thanksgiving and Christmas, the Pennells have made a practice of having players who might not be able to make it home to see their families celebrate with them.

“We entertain quite a bit and this house is great for entertaining,” says Julie. “It’s got a good flow to it and it’s large enough to accommodate a lot of bodies.”

There are many things about the property that endear it to its owners.

“I love that we’re on the top of a hill,” says Julie. “We have a great view of the country club and the sunset in the afternoons. I love the trees in the backyard. And Russ and I will go and walk — it’s a great place to walk. We’re not too far from the walking trail. It’s just a great place to live.”