[dropcap]We[/dropcap] spotted this home during a Christmas tour and immediately admired the clean lines and simple elegance of its design. When we learned it was the handiwork of Jennifer Huett, associate member of the American Society of Interior Designers (ASID) and owner of House to Home in Hot Springs, we weren’t surprised.  And when we further discovered lifestyle guru Chris Olsen, owner of the newly opened Plantopia, designed the landscape and that Huett also designed the exterior living spaces, we just had to feature it.

“This exterior design is a continuation of the home’s design,” Huett said. “It’s an evolution of the interior.

“Initially this yard was truly a hardscape, a large concrete patio and a pool,” Olsen said. “The homeowner wanted to carry the interior’s contemporary, organic feel to the exterior. Our goal was to do this and to create a resort feel.” 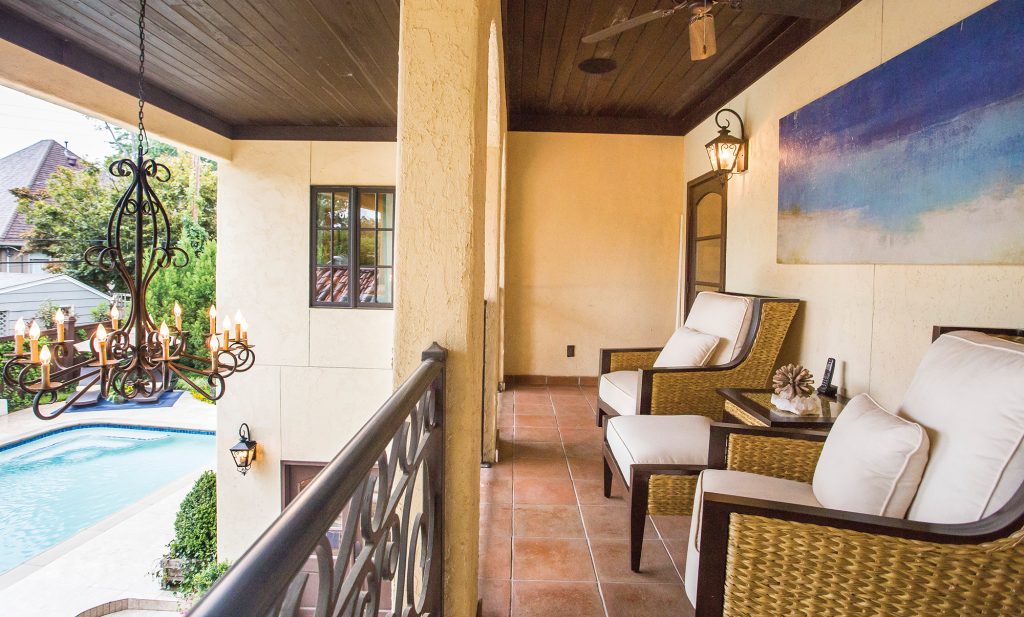 To create flow and continuity, Huett furnished the balcony, which overlooks the pool, similarly to the living area below. A pair of high-back gliders with matching cushions, the use of the same rust-hued tile and a painting in colors that echo those used on the lower level accomplish this well. And a ceiling fan helps cool occupants on our balmy summer nights. 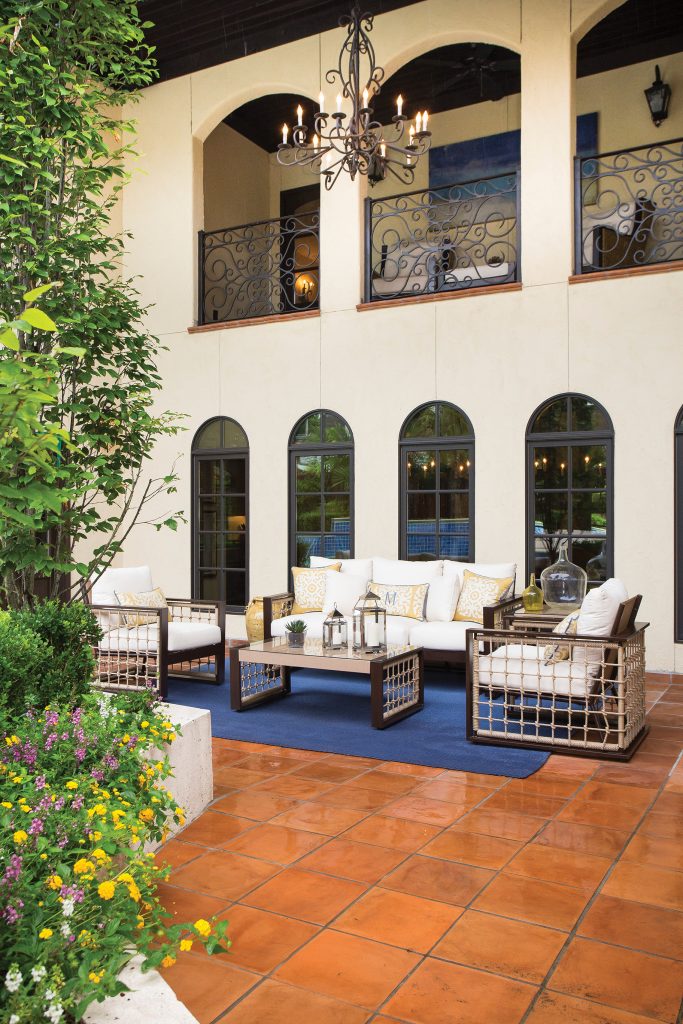 Huett’s design ingenuity is well showcased in this photograph. She said, “This home has a Spanish flair, yet their style is very modern.” So she married the two styles with various elements. One way she achieved this was by placing a chandelier so it complements both the balcony and the lower level living space; this further ties together the two areas. Although these spaces aren’t on the same level, they are clearly a continuation of each other. 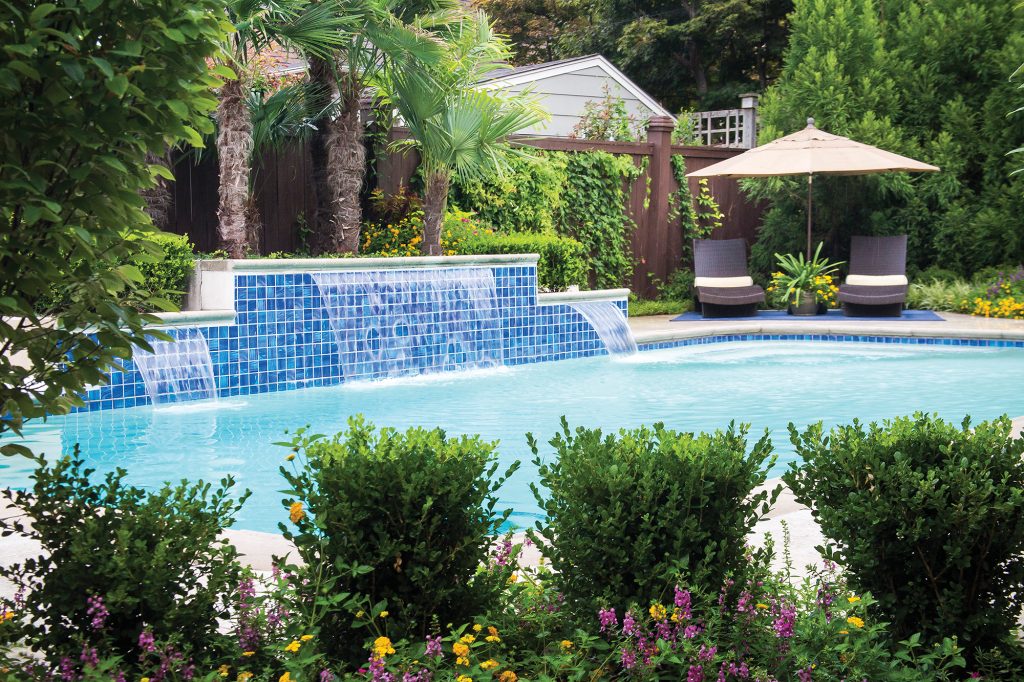 Mature trees, various vining plants and windmill fan palm trees planted against the home’s privacy fence and the liberal use of flowering plants create an island-like atmosphere and give the illusion of an area much larger than its estimated 80 feet by 35 feet. 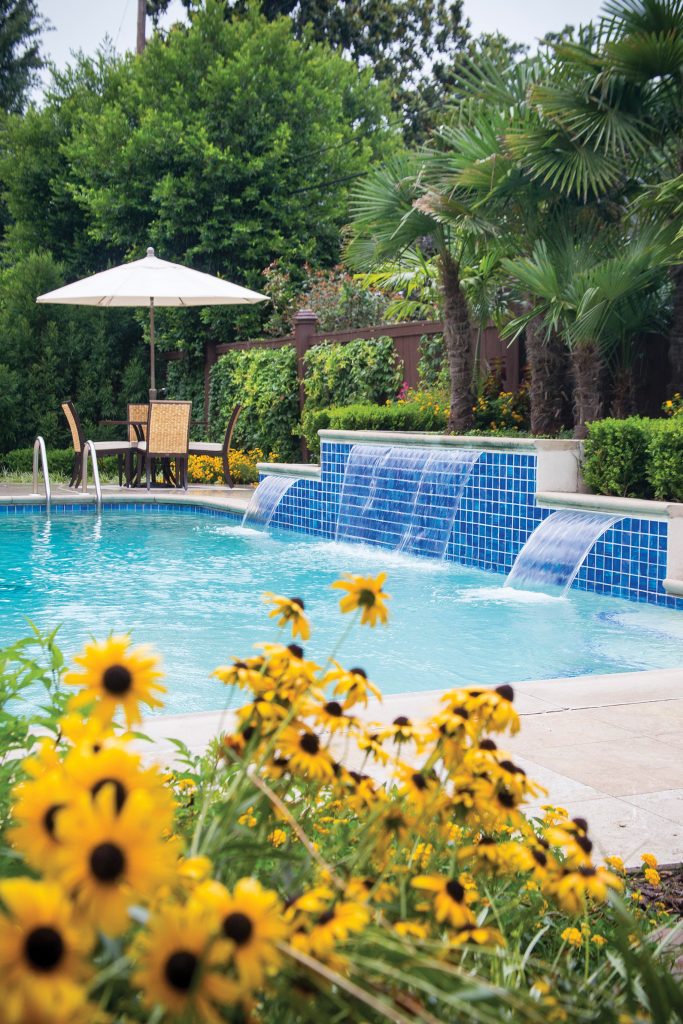 “While we wanted to add color and softness to the yard, we didn’t want to ‘complicate’ it, so we planted several drifts of a few flowers and added a number of planters, strategically placed,” Olsen said.

“The shrubs [in the foreground] are my favorite. They’re wintergreen boxwoods. Planted beneath them for seasonal color are heat-tolerant, yellow trailing lantana and Angelonia, which are also called summer snapdragons. Both will bloom their little hearts out all summer.”