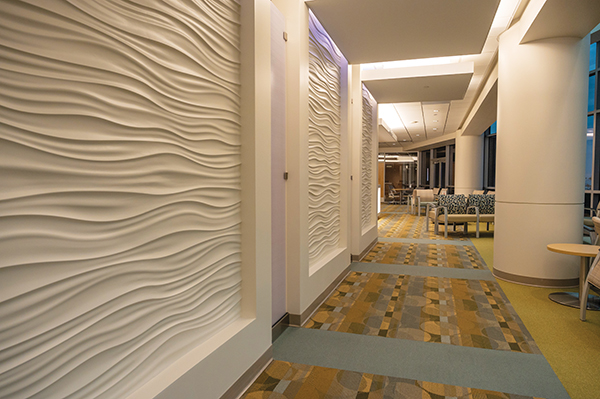 Most of the thoughts rolling through LeaAndrea Maxwell’s head on that day, Feb. 27, 2020, were a numbing buzz. The medical professional in front of her hadn’t stopped talking, but the words ceased to make sense, like listening to music underwater. The entrepreneur, performer and caregiver to her aging father had just been given news none of the women in her family had ever had to hear — breast cancer. And the shock of it dulled her senses aside from one quiet but firm voice, on repeat: “I don’t want to do this.”

“To be diagnosed with cancer at such a young age and then, right at the beginning of the pandemic, I really didn’t know what to do,” Maxwell says. “I thought, this is going to just stop everything in my life, and I was having some second thoughts about treatment, and whether or not I wanted to do anything about it.

“One of the things that I really loved about my doctor is she knew that, and she actually took the time to call me — like, personally, herself. She sat on the phone with me for almost an hour, explaining the type of cancer that I had and how imperative it was that we do something about it. So that’s what gave me that extra push.” 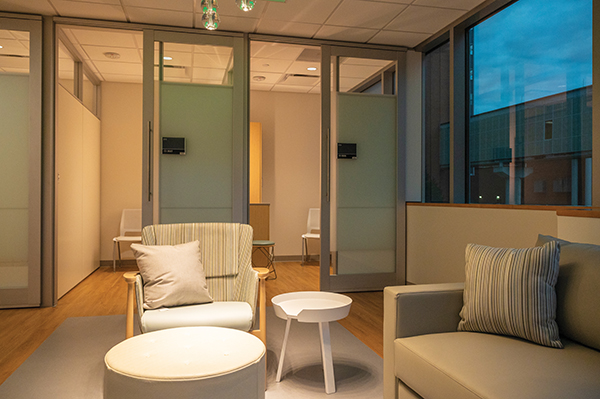 The functional and artful design of the new center left no detail to chance.

Even with the physician’s consult giving her direction, Maxwell’s choice of the UAMS Breast Center didn’t do much to inspire her in her recovery. With its cramped quarters stuck into a make-do space in the aging Outpatient Center, the accommodations were somber and inefficient, far removed from the hospital’s stellar reputation for level of care that attracted her in the first place.

“Initially, I chose UAMS because I know they are second to none when it comes to care and the patients and forward-thinking treatment and medication,” she says. “UAMS has saved my life on more than one occasion, so I definitely wanted to go there.

“As far as the Breast Center, it definitely left a lot to be desired. I don’t think it was laid out well. You were kind of confused where you needed to go, and everything wasn’t centrally located.”

Maxwell nonetheless reported for her treatments as scheduled during March and April, pandemic be damned. Then, by the time she made her next appointment, she was directed to the new UAMS Breast Center, freshly opened in the Winthrop P. Rockefeller Cancer Institute. It was like stepping onto the surface of another planet.

“It had such a nice, open feel about it. I mean, it’s like a breath of fresh air,” she says. “It’s easier to find everything, every doctor that you need. When you go and get your blood work, it’s right there when you first come in the door. I think it’s a lot easier for people.”

Through a series of medications, radiation and surgery, Maxwell was declared cancer-free and put onto a stepped-up maintenance program of exams and return visits to ensure the cancer doesn’t come back. She considers the new facility to have been critical in her recovery.

“When you’re dealing with cancer, you’re going to be exhausted. You’re going to be tired,” she says. “You really don’t want to have to trek from one building all the way to the next, or to another floor, or this is in the old part of the hospital, or this is in the new part of the hospital. With them putting it all in one area, and the nice open-space design with the windows, and you get the sunlight coming in, it’s definitely beautiful. It makes you feel a lot more welcome.

Laying eyes on the Winthrop P. Rockefeller Cancer Institute is an awe-inspiring experience. Twelve stories of glass soar skyward ushering in countless people whose only commonality is they are facing the biggest fight of their lives. Tour any one of the departments and see the latest in cancer technology at work with equal attention paid to patient comfort and emotional health, while drugs and machines wage war on mutated cells.

The finished floors are so impressive that it’s jarring to find a floor that is still just steel studs and drywall. Most people don’t know the looming tower is not yet fully built out, forcing some cancer departments to reside in makeshift quarters until the necessary funding can finish out their floor alongside their fellows.

Such was the case with the UAMS Breast Center, which finally welcomed patients to its new, 12,000-square-foot space in early April. It’s part of a domino effect of cancer departments at long last coming home. 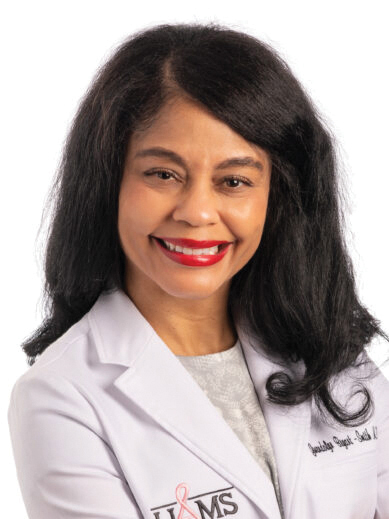 “The new Breast Center has been in the works forever. This has been 17 years in the making,” says Dr. Gwendolyn Bryant-Smith, director. “Funding was the issue. There’s been a pursuit of fundraising for a number of years to finish out floors three, six and seven. That is all happening now.

“Six was finished first and opened first a few months back. Then we’ve opened on the third floor, which is housing the Breast Center and bone marrow. Bone marrow opened a month or two before we did. The last project that they expect to open in the fall is the seventh floor, which is going to be a multi-disciplinary clinic where multiple doctors can see a patient at one time, so the patient’s not having to go all over.”

Bryant-Smith is a small woman with a huge personality, whose personal and professional roots in Little Rock run a mile deep. UAMS is familiar turf; here, she completed medical school, her five-year radiology residency, her one-year breast fellowship, then two more years on staff. After an eight-year stint as chief of breast imaging for the VA, she came back to UAMS in 2016 as head of breast imaging and director of the program.

Despite all of this affinity, she doesn’t pull any punches when describing the challenges of the center’s previous digs, as it awaited the funds to expand. 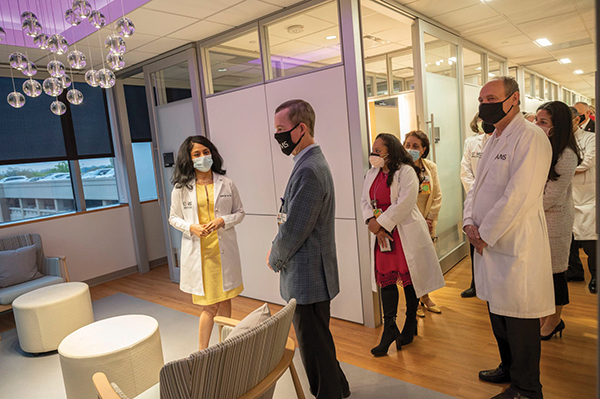 Dr. Cam Patterson and other UAMS leadership touring the center.

“The Breast Center, prior to our April 5, 2021 move, was housed in the Outpatient Building, an older building that’s been around for many, many, many years,” she says. “We were in about 4,500 square feet, and we had outgrown our space. We had kind of a closed area waiting room with no windows. The space was small. We had three mammography rooms, two ultrasound rooms.”

The overloaded space forced a daily three-card monte of personnel, shuffling 20 employees and a stray medical student or two among the average 67 scheduled patients a day, not counting drop-ins. Wait times could expand at the drop of a hat when the unexpected walked in.

“We often got behind if we had a biopsy going on in one ultrasound room and two or three patients unexpectedly showed up with lumps,” Bryant-Smith says. “They would schedule as a screening exam, then they would come to clinic and say, ‘Oh, by the way, I feel this lump.’

“So that would completely change their exam and, of course, we’re not going to turn them away and say, ‘This is not what you were scheduled for.’ That could change a wait time from 20 minutes to an hour or an hour and a half if you had to just sit and wait until another patient finished having an ultrasound.”

The new Breast Center, by contrast, is an open and airy space where no design detail has been left to chance. Attention was given right down to placement of changing rooms’ fixtures and lighting. Special attention was devoted to traffic flow, minimizing the number of steps a woman takes from one area to the next with a special discreet entrance for public figures to avoid prying eyes.

On par with the medical offerings is the attention given to ambiance, anchored by a large wall at the entrance finished in a texture that simulates waves on a lake or ocean with soft color-change lighting flowing over it. Original artwork is soon to arrive to adorn the walls, and natural light is everywhere. If these considerations seems superfluous, it’s only because you haven’t found yourself in this situation, Bryant-Smith says.

“Anxiety is quoted as one of the harms in the literature of mammography. We are fighting to decrease that by creating a space for the patient that feels more serene, less claustrophobic,” she says. “You always remember the painting that was in the room when you get diagnosed. Or, you always remember the painting in the room when you sat there scared, waiting on the diagnosis or if they were going to tell you that you were cleared.

“So, artwork is a very important way to minister to patients, as is lighting that’s serene. The whole thing is to create a calm environment for medical procedures and tests that tend to provoke anxiety.”

There’s no telling how many lives will be saved by the new Breast Center, just like no one can say for sure how many women skipped or avoided their exams last year due to a combination of COVID-19 fears made worse by the cramped quarters of the previous space. But as the saying goes, just one death is too many, and just one woman saved makes all efforts worth it.

Holly Choate is one such patient.

“My gynecologist told me, ‘You’re 40 now, so you need to start getting your mammogram screenings,’” Choate says. “I said, ‘Sure, will do. We’ll go to UAMS and get everything done.’ My first round here was about three years ago, and I was getting diagnostic mammograms at that time. They just saw some things that didn’t maybe look quite right. Instead of the screening route, they sent me through the diagnostic route. I did the mammograms, and I did the ultrasounds every six months.”

Like most people, Choate saw the former Breast Center space as substandard to meet the needs of patients, but she chose it in part because of being a UAMS employee. But once 2020 rolled around, even that wasn’t enough to keep her on her schedule.

“So, recently, I was talking to one of my coworkers, and I said, ‘I’ve really got to get an appointment, I put it off.’ She said, ‘Do not put it off. I got my screening and found out I had breast cancer. If it hadn’t been for the screening, I would’ve never known. Get your appointment.’”

Choate, who ultimately proved cancer-free, said the new center will put anyone’s fears to rest — COVID-19, cancer or otherwise — while at the same time inspiring hope in patients.

“It definitely lifts your spirits,” she says. “My first experience, when I did have that little scare, was in a dark, dingy space. When you get the news, it’s just … not the best headspace that you want to be in. When I walked into the new center, everything was so nice. Even the little changing area that they put me in just was so welcoming and warm.

“Between the nice space that you’re in, plus the staff being so caring, I think it’s just a wonderful experience to come here.”