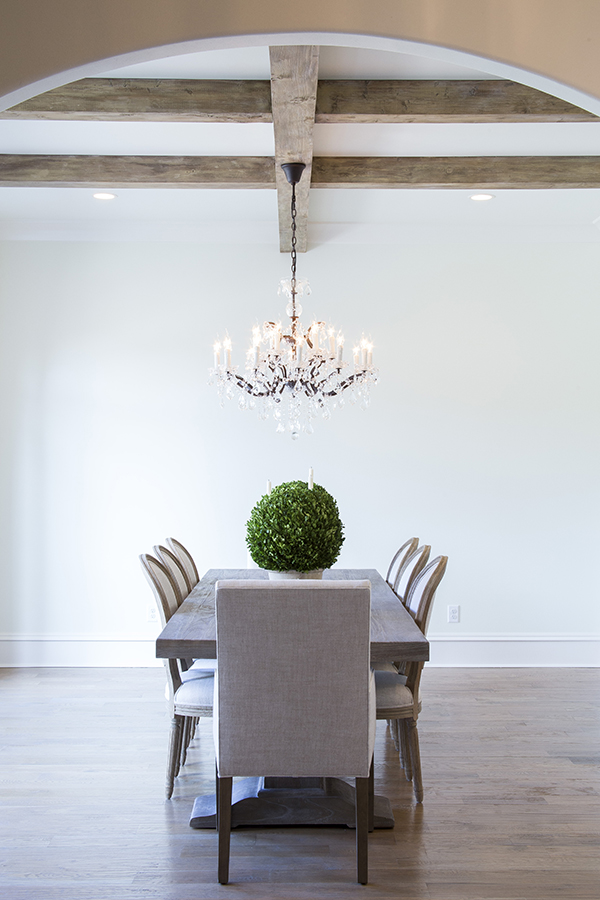 The clean lines of a wooden table and upholstered chairs in the dining room are representative of the uncluttered look of the rest of the home.

by Kim Dishongh l Photography by Janet Warlick
Shane and Maral Johnson’s serene Chenal home is just one of the major milestones they have crossed in the last few years.
They were both working in sales for the same medical device company when they met at a work conference. After dating long-distance for a year and a half, Maral moved from Los Angeles to Little Rock to be with Shane. They married in May 2015, and their son, Cameron, was born in the spring of 2017.
“We did all the big life events within a few years,” says Maral. “Me moving here, having a wedding, us building a house, having a baby… I can’t even believe how fast it’s gone by.”
They didn’t find exactly what they were looking for when they started shopping for a home together in Little Rock. Maral preferred lighter finishes and more natural light than what she saw in most of the houses on the market. They decided to build, finding a floor plan they loved online and adapting it to their own needs and preferences. 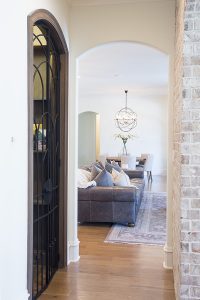 The gray leather sofa from Restoration Hardware is where the Johnsons spend family time.

They looked at a couple of homes built by Bill Parkinson of Parkinson Building Group.
“His own house was amazing, so we ended up using him. He was amazing throughout the entire process,” she says.
Antique wooden sliding doors with iron insets, painted slate gray, hang outside Shane’s home office, which looks nothing at all like a home office.
“I have my laptop and I can put it in a drawer when people come over,” he says. “Printers are wireless these days, of course, so that’s hidden away in another part of the house.”
Slate gray built-ins display books in similar tones, purchased from the Maryland-based Books By the Foot, as well as black and white photos from Maral and Shane’s wedding and pictures of a newborn Cameron. A simple antique wooden table sits in the middle of the room on a white rug.
“I love this part of the house,” says Maral, standing between two arched entryways at the base of the stairs in the foyer of her home. From there, the arc at the top of the double wooden front doors and the echoing arc of the arched entryways are visible over the hand-scraped weathered oak floor boards.
A two-tiered iron light fixture hangs in the center of the foyer. The ceiling here is open to the second story.
“We really wanted different ceiling heights,” she says. “Every room has a different ceiling height.”
Cedar beams with faux-antique finish done by Angelfish Studios cross the lower dining room ceiling and anchor a chandelier that hangs over the center of a rustic wooden table with eight upholstered dining chairs.
A wine closet, with a wood wine rack enclosed behind wrought iron doors, is tucked into a corner of the living room.
“We wanted to use the space that we have,” says Maral.
Cedar beams also accent the ceiling in the living room, where an antique-finish brick wall separates a seating area from the hallway leading to the master suite. 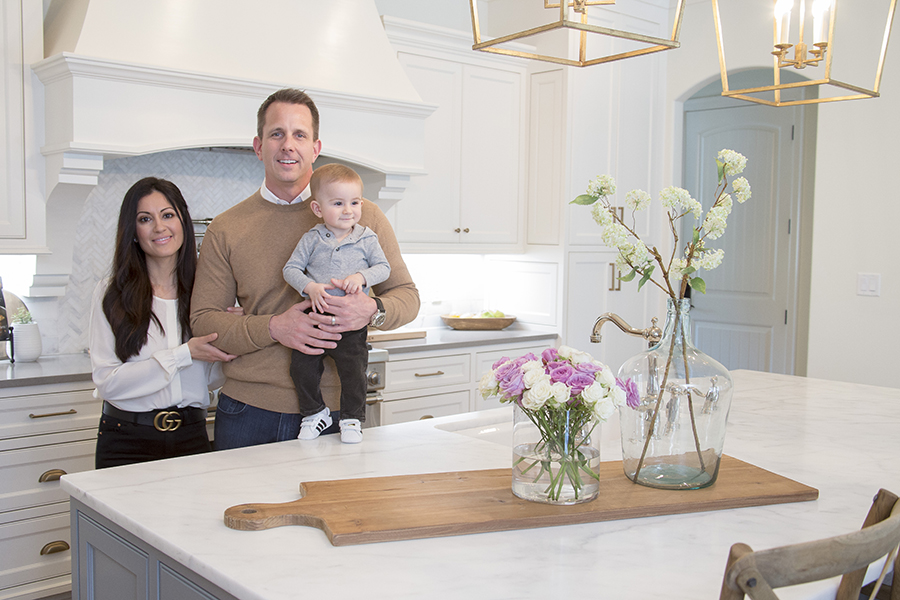 Maral and Shane Johnson and their son, Cameron, spend time in their kitchen, which has the same marble on the counter and in a herringbone pattern on the backsplash.

Most of their time, she explains, is spent in the adjacent family room. A deep, gray leather sofa from Restoration Hardware, draped with a soft cream throw and decorated with several plump throw pillows, faces the flat screen television mounted over the mantel. The television is flanked by mirrored doors, coated with an antique finish that matches antiqued mirrors on the powder room cabinet doors.
A wall of towering windows across the back of the house afford a view of the pool, two patio seating areas – one with an outdoor fireplace – an outdoor kitchen and a fire pit, as well as a sloping, heavily wooded lot behind the property.
Summers are spent in the pool, Maral says, which is why she plans to enroll 10-month-old Cameron in swimming classes soon and also plans to have a baby-proof access gate installed to the pool area. They haven’t made much use as yet of the fire pit, however, because California-native Maral isn’t quite as eager to embrace an evening of cool weather.
The family room is open to the kitchen, where Maral spends time preparing healthy soups – lentil soups, broccoli soups and other healthy vegetable-based dishes that her own mother prepared for her when she was a child – for Cameron and, when there’s time, Persian dishes for the family.

The ceiling, open to the second floor, holds a two-tiered iron light fixture and the hand-scraped oak floors stretch into the formal living area.

“She’s an amazing cook, and she does cook, but not as much as she did before the baby,” says Shane, who has taken over some of the cooking duties while Maral cares for their son. “I love cooking, but I’m not nearly as good as she is.”
The kitchen island, painted with Restoration Hardware’s Granite, is topped with Casa Bianca marble. The same Casa Bianca marble forms a herringbone pattern in the backsplash. In the corner of the kitchen is a bar area with stemware cabinets and a wine refrigerator.
“It’s a very neutral palette,” says Maral of the entire home. “I don’t really like a lot of color.”
She and Shane have decorated the home themselves.
“It’s definitely a work in progress. We aren’t done yet,” she says. “We got a lot of things at Restoration Hardware in California when we were there. We just went to the store and picked what we wanted. We’ve gotten some pieces from Providence Design and some accessories at Cobblestone and Vine and other random places. We’ve just gotten what we like.”
Long windows in the master bedroom are covered with gray drapes by Laura’s Draperies and Blinds. A nook on the back wall is set apart from the rest of the room by an overhanging arch and makes room for a seating area and a collapsible crib.
That’s where Maral and Cameron spend time playing on a gray and white foam mat with jungle animal inserts. Cameron’s crib, slate gray and soothingly coordinated with the neutral tones of the room, sits against one wall.
The spacious master bathroom has a freestanding bathtub. “He takes his bath in there every night,” Maral says of her son.
There is also a walk-through shower with Zera Bianco marble wall tiles and Haisa Light marble tiles on the floor. A vanity and two sinks, on adjacent walls, are crisp white with white marble countertops. A sliding barn door allows for privacy.
The Johnsons aren’t sure how long they will remain in Arkansas – California is home for Maral and living there would mean less work travel for Shane – but for now they are enjoying their home in Little Rock.
“It’s not our forever home,” says Maral. “I feel like once we get it just the way we want it, we will be moving away.” 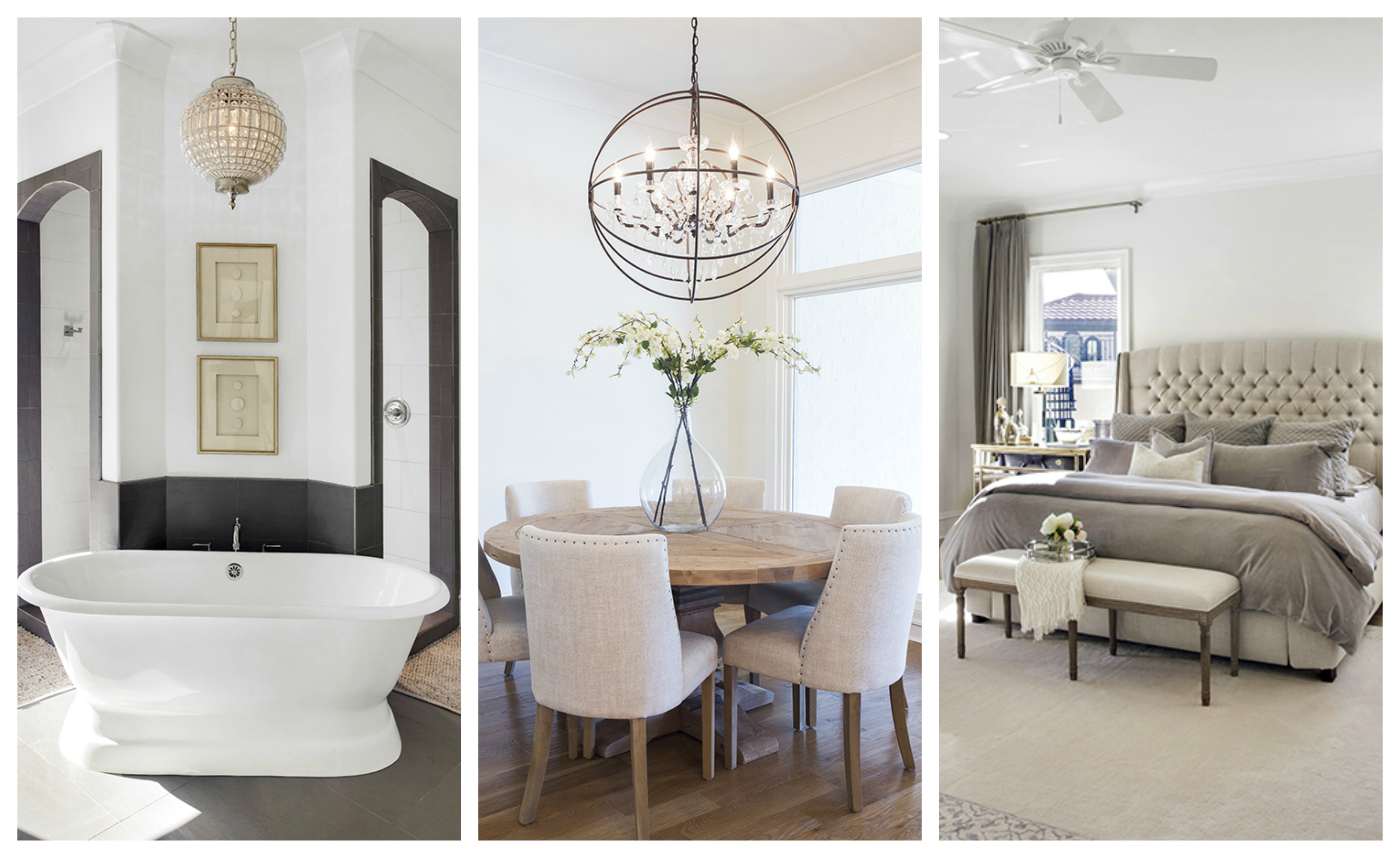 This freestanding tub is where Maral bathes her infant son each night. A cozy breakfast nook off the family room, overlooks the outdoor kitchen and the pool on the back lawn. 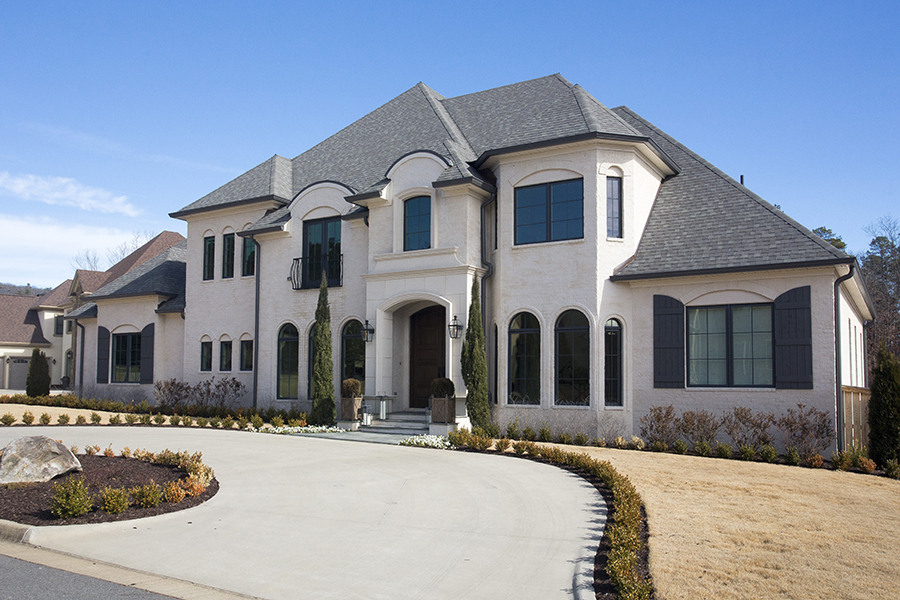 Maral and Shane Johnson’s Chenal home, constructed by Bill Parkinson of Parkinson Building Group, brings a little of Maral’s home state of California to the south. Brick was provided by Antique Brick and Block. 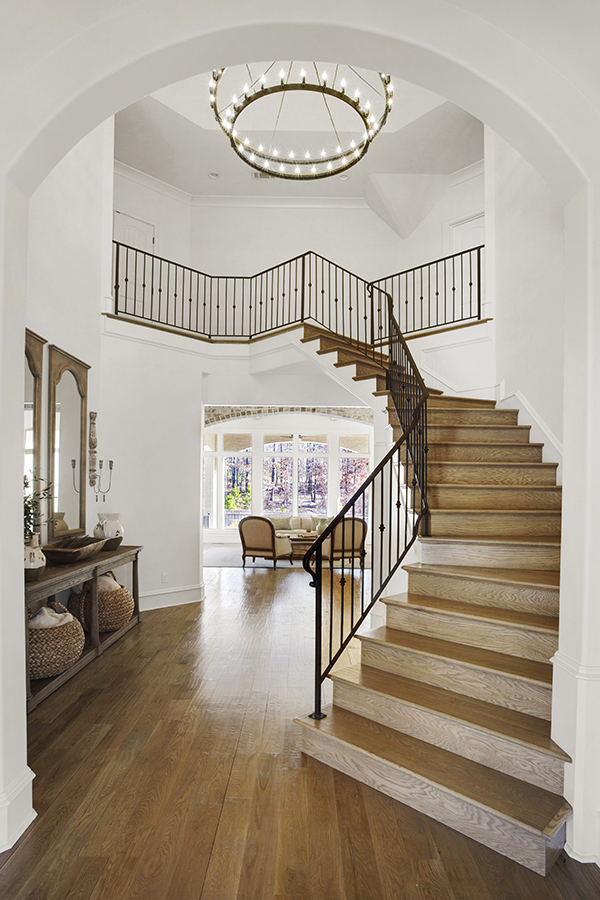 The family room is where Maral and Shane Johnson relax and watch television, which can be shuttered behind antique glass doors when not in use.