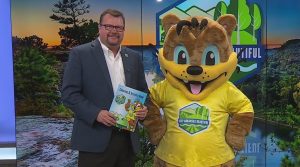 Mark Camp and Otto the Otter on KARK.

For this week’s Hometown Heroes, AY About You sits down with Mark Camp, Executive Director of Keep Arkansas Beautiful.

Camp first took over as the director of the Keep Arkansas Beautiful state agency in 2016. He had been in the municipal finance world his whole life, and after retiring, wanted to get involved volunteering and doing more.

“I’ve always been appalled by people throwing trash out of their windows — why and how someone can do that is beyond me,” Camp says. “I wanted really and truly to have an impact.”

After becoming the director of the commission, Camp’s first move was to rebrand. The logo when Camp first started was three fall colored leaves. But he wanted a logo that let Arkansans know what his office was all about.

“We worked on some logo ideas, and let people around the state vote to come up with the final product,” Camp says. 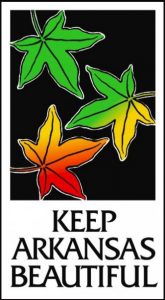 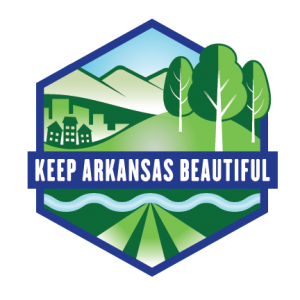 The old logo for the commission compared to the new, redesigned version.

Now, the logo conveys themes of recycling, beautification and anti-litter.

“We made sure to incorporate colors that young people can be attracted to and want to wear,” Camp says.

Next, Camp began to analyze the role that Keep Arkansas Beautiful plays.

“I learned on the job that we’re really good at cleaning up after people,” he says. “But the trash is there the next day.”

Camp decided, then, that to secure a cleaner future for Arkansas tomorrow, he would need to start educating kids on the importance of the environment today.

“If we teach kids while they are very young that ‘keeping Arkansas beautiful’ is important, they’ll grow up remembering and will do the right thing,” Camp says.

And so Camp set out to create a mascot, who would tell Arkansas students about the importance of taking care of Arkansas’s environment. Ron Wolfe, a long time cartoonist with the Arkansas Democrat-Gazette, worked with Camp to create Otto the Otter.

Wolfe wrote and illustrated a children’s book to help Camp with his task, called Otto the Otter and the Great Arkansas Mystery. 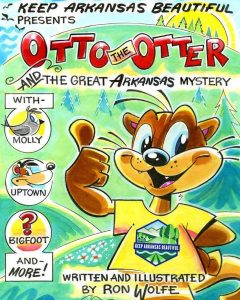 In this book, Otto journeys across the Natural State, making friends such as Molly Mockingbird, Uptown Bear, Lightin’ Bob the Blues-Singin’ Snapper, Patty Bat, Poset the Poet ‘Possum and more. Throughout the children’s book, Otto and the crew recognize the importance of cleaning up after yourself, especially when they realize that the reason Arkansas’ Fouke monster has never been found is because he “leaves no trace”.

Camp also had an activity book created in English and Spanish for Arkansas students to have after reading the book, along with bookmarks, stickers and temporary tattoos.

Since his inception, Otto the Otter has become the face of the Keep Arkansas Beautiful campaign. Every trash receptacle at the Little Rock Zoo has Otto on it, and trash cans in the airport are adorned with Otto-Pilot, reminding travelers to do their part to keep Arkansas beautiful. 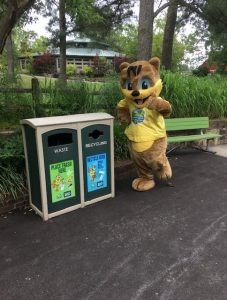 Otto at the Zoo.

Camp is working with groups and organizations such as the Zoo, the Bill and Hillary Clinton International Airport and Univision to spread awareness for Keep Arkansas Beautiful’s campaign.

“If we change the way that kids think about this now, we can pave the way for the future,” Camp says.

If you’re interested in learning more about caring for Arkansas’ environment and keeping up with Otto the Otter’s adventures, be sure to check out Keep Arkansas Beautiful’s website here, or check out its Facebook page for more information.