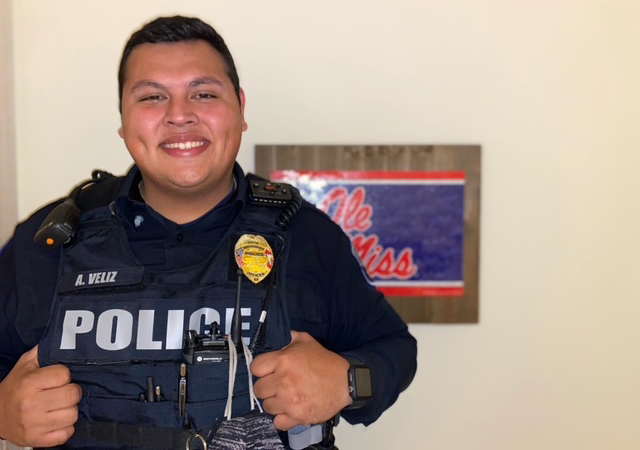 Patrol Officer Anthony Veliz is a Mexican American, whose parents immigrated to the United States. Veliz grew up in Mississippi and went to Ole Miss, graduating in 2019 with a bachelor’s degree in criminal justice. He was the first person in his immediate family to go to college.

Veliz was trying to find his girlfriend a good graduate program, while she worked to help him find a job. She was looking at attending UA Little Rock, and she found a job for him at the North Little Rock Police Department.

Veliz’s girlfriend ended up going to Texas Tech, but Veliz fell in love with North Little Rock, and would go on to join the NLRPD.

A fan of the outdoors and an avid motorcycle rider, Veliz considers Arkansas, and more specifically North Little Rock, to be his new home.

“I’d never heard of North Little Rock, and I’d never really been to Little Rock except when I was passing through to visit family,” Veliz says. “My first time in North Little Rock was for my written exam for the police department. After that I’d just drive around, and fell in love with the city. We don’t have stuff like this in Mississippi. I’ve realized that there’s a lot to do here, as I’ve gotten to know my city.”

Veliz speaks on the unrest from this previous year. “I haven’t really seen any negative contact with officers or with me. We’re here to help the community. The Chief told me that the department works hard to develop the current respect in the community. My family always had a sour taste in their mouths for law enforcement, because of the corruption of law enforcement back in Mexico.”

For Veliz, his goal as a police officer addresses just that. “I want to change the view that Hispanics have on law enforcement. I’m bilingual, so I can talk to Hispanic people and calm them down, especially right now with everything going on. A few bad officers make everyone look bad. I want to encourage fellow Hispanics and law enforcement to come together and show mutual respect for each other.”

Veliz details just how different things are right now compared to how they usually are.

“Policy and procedures are much different right now in the pandemic than before. We work hard to protect ourselves and whoever we have contact with. With the passing of Sergeant Dancy, that really drove the point home. We try to eliminate just how much contact we have with people. Of course, if we get a call, we have to go, but we always remember to wear a mask, use hand sanitizer, social distance and disinfect vehicles. It will make it easier for us and the community, when we go back to our normal lives.”

Veliz outlines some of his future goals in the NLRPD.

“One of my goals is to go into the detective’s office and build up my investigative skills. I want to work for a federal department at some point, I’m just not sure which one yet. I want to keep moving up the ladder and honing my skills.”