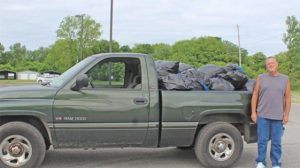 For this week’s Hometown Heroes segment, AY About You sits down with Rex Williams, Batesville’s independent “Master Trash Pickup” man.

Every day, for the last three-and-a-half years, Williams has gone out and picked up trash all throughout Independence County. “I didn’t have anything to do and was driving home one day. I saw a few trash bags that had fallen beside the road, and critters had gone all through them and scattered trash everywhere. I thought that it looked bad, so I went home and got some trash bags, went back, and picked it up. I’ve been doing it ever since,” he says.

Williams, who has a disability, says that he picks up trash for his own mental and physical well-being. The city recently began providing Williams with trash bags to use. He has a GoFundMe on his page to help pay for trash grabbers, rubber grippers, car repairs, tick and bug spray, Gatorade and gas as he drives back and forth across the county.

“Some of my friends helped me set up the GoFundMe. It allows me to drive a little more than I once did,” he says. “I used to stay within 10-12 miles away from where I live, and now I have gone out 20 to 25 miles one-way, so it helps.” 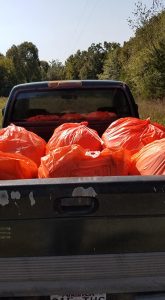 Unfortunately, Williams mentions that he has faced plenty of abuse at the hands of passersby.

But Williams does mention that there are also people who are supportive of him.

“Sometimes people pull over and hand me five or ten dollars. But I always feel bad about taking it, cause it might be their last few dollars.” 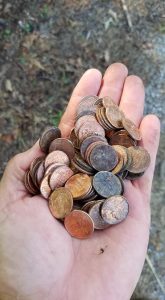 Williams points out that some of the places that he cleans are part of illegal, repetitive dumping, while others are the aftermath of large parties and gatherings in parking lots.

While most residents in Batesville are limited on how much trash they can dispose of through the city’s services, Williams had already met the 4,000 pound limit for the year by March. The city granted him a special exception. Since then, Williams’s trash pickup total has increased five-fold.

“After I started dumping on the county’s dime, I’ve dumped 49 loads and my loads average about 300 pounds. So since January 1, I’ve dumped this year around 20,000 pounds of trash.” 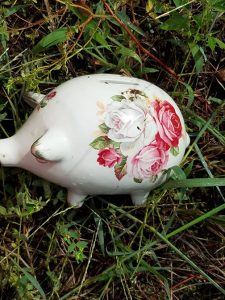 Williams has found all sorts of interesting discarded items, which he chronicles daily on his Facebook page. Some of the items that he’s found are an iPad, dumped cars, a milk container full of syringes, children’s books, drug paraphernalia, toilets, a power drill, and a typewriter, to name a few.

Williams hopes that people won’t just rely on him to clean their roads and county, but that they’ll take the initiative to start cleaning themselves. “A lot of people just want me to clean. But it’s not hard to go outside and pick up the world around you. Besides, it looks and feels a lot better after you do,” he says.

If you’re interested in helping Rex continue his trash cleaning journey, visit his GoFundMe or his Facebook page.