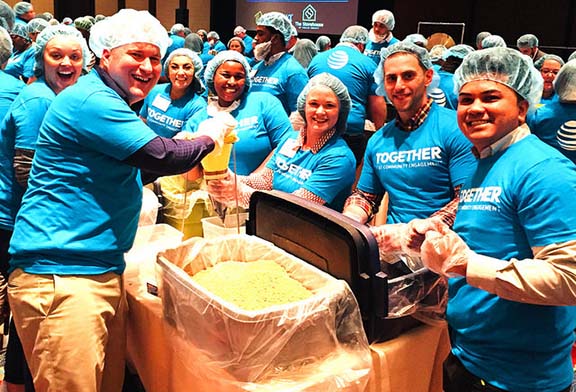 For this week’s Hometown Heroes, AY About You spotlights the Pack Shack, a Northwest Arkansas non-profit that prepares meals for donation to hunger relief organizations around the country.

When someone signs up for a Feed the Funnel Party with the Pack Shack, they can expect “a crazy fun time,” according Brett Raymond, the Pack Shack’s CEO and co-founder.

“We don’t like to have activities, or to have events,” Raymond says of their meal packing efforts. “We like to have parties.”

The Pack Shack knows how to keep partygoers entertained. Attendees can expect music customized to their group, disco balls, and hula hoops during the parties. As groups get closer to their donation goal, they hit a gong to keep the party going. Groups range from sports teams to church groups to any community group that wants to give back.

Each group does much more than party, of course. As they dance, sing and hit the gong, they’re packing meals that will go straight to local charities as soon as the party’s over. These meals were developed with the help of Tyson Foods to be both healthy and easy to prepare.

“They’re nutritional, but they also taste really good,” Raymond says. The most common meal is the cheesy rice and vegetables, but Pack Shack also prepares pasta parmesan and macaroni and cheese meals. All they need is water to be cooked and ready to feed an entire family.

Since they opened in 2013, the Pack Shack has donated more than 30 million meals to hunger relief organizations across the country. They brought their parties to cities Boston, San Francisco and Houston.

This year, however, funnel parties have looked a little bit different. Unable to travel, the Pack Shack has focused on donating from their party room in Cave Springs. Their parties prior to the coronavirus epidemic generally had 125 attendees packing as many as 50,000 meals. They now have about 3-8 people at a party, where the Pack Shack has implemented all recommended social distancing guidelines.

Despite these setbacks, the Pack Shack has still provided for its community. They have thrown 140 feeding parties since the pandemic began and donated more than 1.5 million meals this year. Hunger relief charities need assistance now more than ever, and the Pack Shack is determined to help people safely serve their communities. 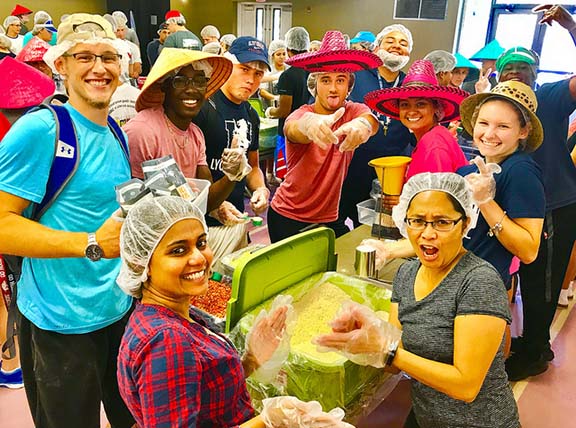 “You don’t have to be a big group to do something,” Raymond says. “Your group might be your family, your neighbor—we can accommodate all of that.”

Every party also benefits an organization local to the participating group, which “puts the decisions in the hands of the community,” according to Raymond.

“Maybe they part ways with us after the party,” Raymond says, “but now they’ve made friends with and deepened their connection with that group” that they have helped. The Pack Shack wants service to continue long after the party’s over. 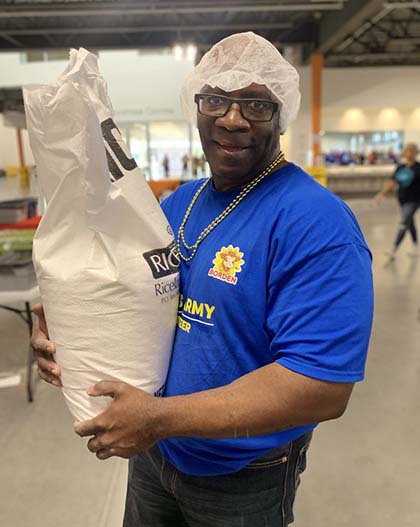 To book your own funnel party, check out their website, and make sure to keep up to date with the Pack Shack by following their Instagram and Facebook pages.