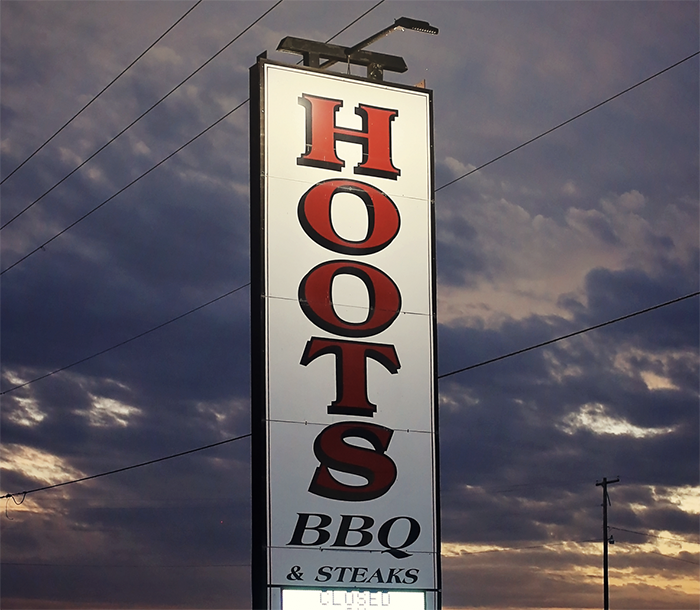 “David and I always did our best thinking when we were drinking,” Susie Powell of Hoots BBQ says with a laugh. That’s how the story of a wildly successful barbecue restaurant begins. Susie says, “We were drinking at the beach – retired and bored – when we conjured up the idea to open Hoots BBQ,” a full-service restaurant and bar in small-town L. A. (Lower Arkansas).
McGehee is off the beaten path for many. But, if you are traveling to the beach, Louisiana or Mississippi, you have to pass Hoots. And though you walked in for the barbecue, Susie says, “you’ll walk out with dessert.” That’s why readers to AY Magazine voted Hoots BBQ “best dessert” in the state of Arkansas. That’s a first-place nod for a first-rate restaurant that, in the late 1940s, was a cattle barn on Highway 65.
The story goes like this: Susie and David Powell, then 47 and 63, were recently retired and sipping Cabernet Sauvignon from their stemmed glasses on the Gulf Coast when they looked at each other and said, “We can’t live like this.” This was after buying what every couple thinks is the picture of retirement – a motor coach to travel and see the country. That’s when David suggested they open a restaurant. “What kind?” asked Susie. “Barbecue,” he said. She countered: “David, I can’t open a BBQ restaurant! I’ve never smoked a piece of meat in my life.” That was the last time she could say that.
It took nearly twenty months to finish out the building, a former Mexican restaurant that had burned. Since they owned the building, they did what any loving homeowner would do; they did the work themselves. It was totally gutted. And if it needed to be done, Susie and David did it – hanging sheetrock, pouring concrete for the countertops, painting.
“People thought we were crazy,” Susie says. “They said, ‘This isn’t going to work in McGehee.'” A noted chef from the area even asked, “Why are you opening a restaurant in McGehee?” Susie answered: “Why not McGehee?” At this point, Susie and David said, “ Failure is not an option.”
It was almost 80 degrees in the Delta on the day the Powells opened Hoots BBQ. April 23, 2012, saw an influx of people who wanted good barbecue and wanted to support their community. That’s how it got its name – the Powells wanted a name that felt good, one that fit their personalities and their community, and there it was, “HOOTS.”

Susie and David had a “hoot,” no matter what they were doing, and the town’s school mascot is an owl. Owls “hoot.” Although the Powells had no restaurant experience at the time, they learned quickly. Susie, who’s entirely self-taught, was a quick study in the art of smoking meats. On a given day, they could serve up to 500 meals for both lunch and dinner, except for Sunday, when they’re closed.
Their menu came from the foods that Susie and David loved during their travels. Things like ribeyes, loaded baked potatoes and the catfish filets are menu staples that keep people coming back. And of course, the barbecue, too.
But it is Susie’s mother, Betty Morse, who is known for her baked goods, who taught Susie the art of baking Italian cream cake, carrot cake and the oh-so-good strawberry cake. “Cooking for the masses is a challenge,” she says. It’s clearly different from cooking for two. She had to learn to cook in a hotel broiler, and says she “will cook over 100 steaks on a busy weekend night.”
She likens her role to that of a football quarterback. “I am the one calling the plays, but it takes an entire team for us to feed this many every day.” Susie works every day, 12-14 hours a day. “It took a lot of love, sweat and beers to open Hoots,” she says. And now she wants to keep the legacy alive. David died unexpectedly at the place they loved: the beach. That was almost four years ago. She says their story is a great love story, where she is living out their “dream.” She hopes to see her traditional spring break and summer travelers who come by for their annual visit, as well as the locals who eat there every week.
Go ahead, get the barbecue. But grab a napkin and plastic fork. You’ll need some cake to keep from getting light-headed as you travel to the beach or the trip back home.