How The West Was Redone

Fort Smith reinvents itself as a cultural center while paying respect to its past.

[dropcap]I[/dropcap]f you had stepped foot in downtown Fort Smith a few years ago, you would have seen a very different town. While it was a city with its amenities, it seemed to be focused on its past, rather than its future.  Then something Unexpected happened.

64/6 Downtown, a development group lead by community leaders who wanted to reinvigorate their town, had a vision.  And it started with a few coats of paint.

They launched ‘The Unexpected’, an annual gathering of some of the top names in street art such as Vhils and D*Face, to descend upon their downtown area, still rife with historical buildings and had them create works of art that would breathe new life into this area. Now after two years, The Unexpected has launched a renaissance on Garrison Avenue, bringing in new restaurants, businesses and even housing.  While the project was called The Unexpected, the results were exactly what they had planned.

“All of the artists are inspired by the history and heritage of Fort Smith, and they should be – there’s a lot to choose from,” said Claire Kohlberg, event organizer for the Unexpected. “They each bring a unique interpretation and are thoughtful within their interpretation. What makes The Unexpected successful as an outdoor gallery is the landscape of our downtown and the genre itself – it’s accessible and brings a different experience to the viewer than a traditional gallery or museum.” 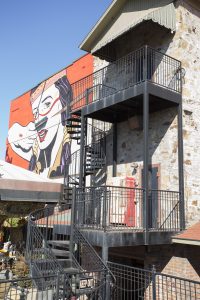 Walking down Garrison Avenue, you never know when one of these works of art might pop up. Many of the works feature Western and Native American themes that are synonymous with the home of the infamous Judge Parker and the United States Marshals, who set out from the frontier town to catch some of the West’s most notorious outlaws. A few blocks away from Garrison, you can witness the majestic, towering murals of Native American workers on the OK Feeds Lot grain elevators by Guido Van Helten. Recently, D*Face returned to paint a new mural, “Warpaint,” by the river front park and install towering arrows at Grand Avenue and 10th Street. Of course, there are some fun pieces such as a 3D possum by Bordalo II peeking over a rooftop or the “Universal Chapel” by Okuda San Miguel.

According to Claude Legris, executive director of the Fort Smith A & P Commission, the Unexpected map is their most popular item that they hand out at Miss Laura’s Visitors Center, a refurbished bordello that provided the pleasures of the flesh for countless adventurers and ruffians as they made a stop in the town before venturing out into Indian Territory. Of course, these days they take care of visitors in a much different manner, offering a peek into the past with artifacts from the bygone frontier era.

‘The Unexpected’ annually invites top street artists such as Veils and D*Face to expand the draw of visitors to enjoy unique outdoor art found on downtown buildings. Chaffee Crossing Historic District includes such finds as the barbershop where Elvis Presley received his buzzcut after being drafted into the U.S. Army in 1958.

Legris believes that Fort Smith is transitioning at the moment. He says, “Fort Smith is where the New South meets the Old West.  We don’t just focus on the past; that’s the groundwork for how we build our future. And that’s a very solid message to bring people to our community.”

One of the cultural draws that has expanded in recent years is Fort Smith’s music scene. New venues like The Sound Room and Wishbones offer a real variety of touring acts. Temple Live, located in the historic Masonic Temple that was built in 1928, is being renovated with an anticipated opening date of March 2017. This facility will feature a prohibition, speakeasy style. The Sphinx Club, located within the facility, will offer handcrafted specialty drinks cocktails and delicious cuisine with a farm-to-table focus. Temple Live will be available for concerts, plays, charity fundraisers and personal and business events. Its 1,200 seat theatre has a new climate control system and state-of-the-art A/V equipment. Look to this venue to put the town on the map for touring acts in the future.

“The music scene here has come up over the last few years,” says Russ Jester, communication manager for the Fort Smith A&P Commission. “They’re bringing in national acts and becoming a hub for Americana and modern folk music. The Peacemakers series has brought some amazing acts to town as well. It’s very impressive what is going on around here.”

The Peacemaker Music Festival has brought big acts like Jason Isbell, Cold War Kids, Chris Robinson Brotherhood, Old 97s, Lucero and more. The festival arose from a conversation over beers between Bill Neumeier and Jeff Gosey. Later that night, Gosey posted the idea on Facebook and the response was overwhelming. The festival has taken place at the end of July the last two years and has been quite the hit.

“The Riverfront Park is one of the most beautiful parks in the region and it’s really rewarding to see that park filled by music lovers for two nights at the end of July,” said Gosey, the co-founder and director. “Bringing Grammy winners and national touring acts to our area has absolutely been a highlight. Seeing our city and the downtown area thrive for a weekend, people from 15 different states filling local hotels, restaurants and bars, and last but not least helping four different local children’s charities is my personal highlight.” 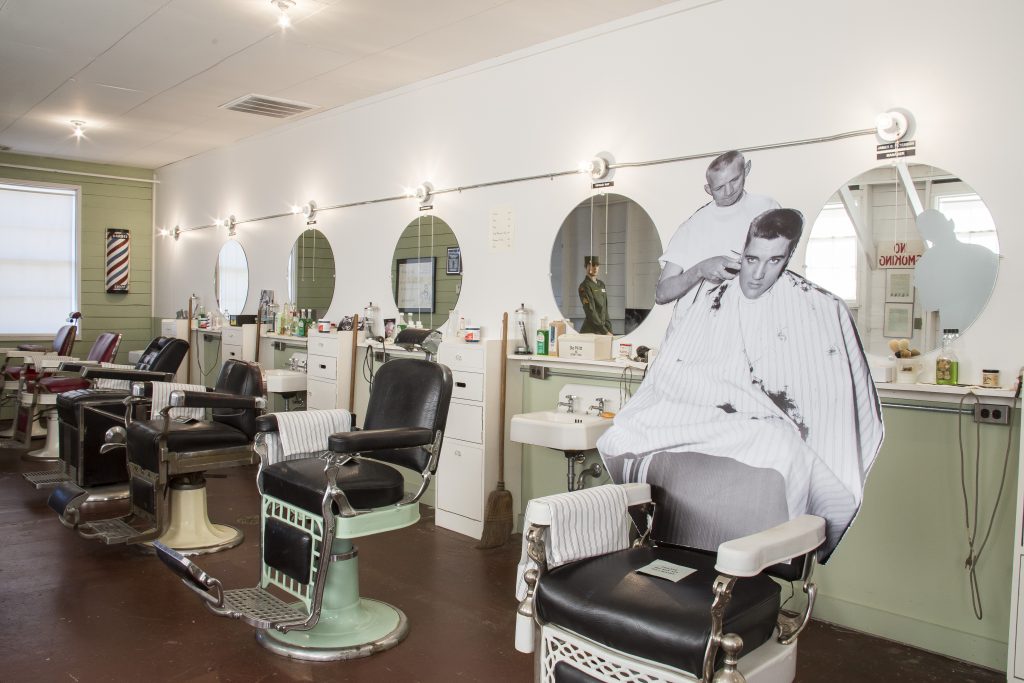 The Peacemaker Music Series keeps the party going the rest of the year. It will continue in 2017 with shows in March, April and May at 5 Star Productions in a cozy 100-seat theatre. While music is a highlight of the new Fort Smith, art still has its place as well.

Besides The Unexpected murals, Fort Smith offers more for art lovers at the Fort Smith Regional Art Museum (RAM), located at 1601 Rogers Avenue, opened in 2013 – the culmination of years of efforts by the Fort Smith Arts Center. This new facility allowed expanded educational programming, classes for all ages and diverse exhibitions from the U.S. and the world. Located in a renovated bank, RAM won the 2013 Preservation through Rehabilitation Award from the Historic Preservation Alliance of Arkansas, the 2014 American Institute of Architects (AIA) Gulf States Region Merit Award, and the American Society of Interior Designers (ASID) Gold Award thanks to the efforts of Polk Stanley Wilcox, known for the work on the William J. Clinton Presidential Library, Heifer International World Headquarters, and the Arkansas Studies Institute (ASI) of Little Rock.

According to Executive Director Lee Ortega, “We are free to the public and offer regular programming (such as RAM Saturdays) so I think RAM has already expanded Fort Smith’s artistic culture to a large extent. We look forward to bringing more traveling shows to Fort Smith, as well as collaborating with Crystal Bridges and showing their Andy Warhol Endangered Species series in the new year.”

Currently, you can see the touring exhibit Pulled, Pressed and Screened: Important American Prints and the work of award-winning artist Jason Sacran, both of which run through early January. 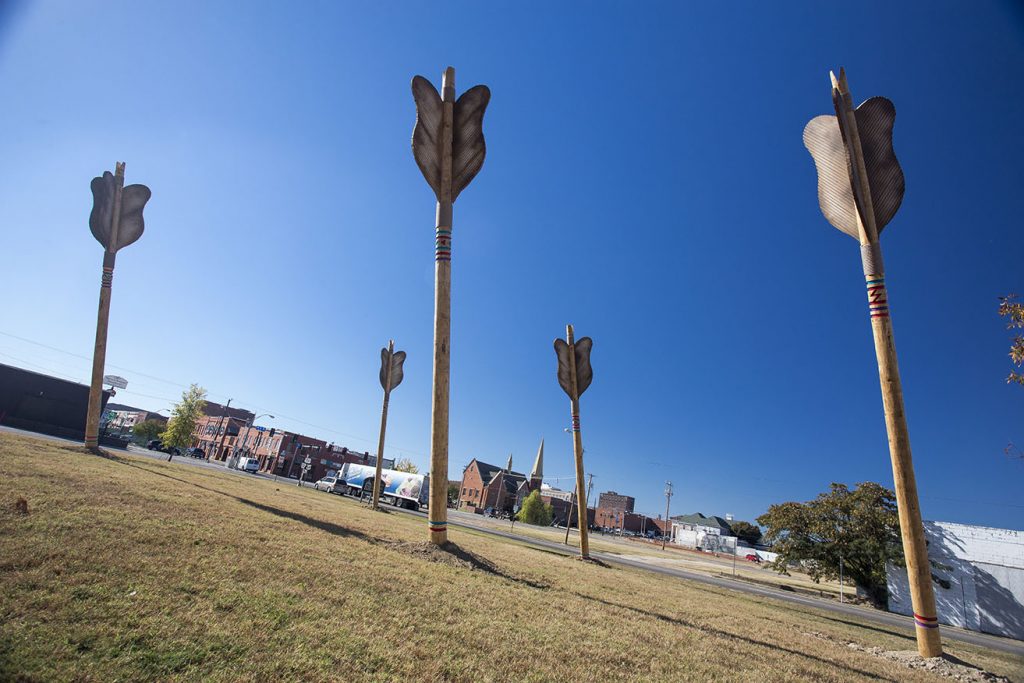 If you’re hungry, head over to Stonehouse at Chaffee Crossing. Completed in 1937 as the Maness Schoolhouse, it was the only civilian building that the Army left standing when they built Fort Chaffee. Located at 8801 Wells Lake Road, the restaurant offers delicious seasonal menus under the guidance of Chef Memo Vaca. Some of the notable cuisine includes the Fried Green Tomato Crab as an appetizer and the King Salmon with honey parsnip mash, farm fresh veggies and a lemon dill butter sauce for the main course. Call (479) 466-0223 for more information.

When you talk to people in Fort Smith, one coming attraction has all of the buzz even though it won’t open until September 24, 2019. That is the United States Marshals Museum. Nestled on the banks of the Arkansas River, this museum will serve as a cornerstone for the community and tourism efforts.

The modern design of the building will feature roofs that break the horizon like sleek arrowheads. The 50,000 square foot museum will feature galleries showcasing the achievements of the marshals from the frontier days to the Civil Rights movement to today. The Samuel M. Sicard Hall of Honor will pay tribute to those marshals who died in the line of duty.

President and CEO Patrick Weeks feels that the tales of adventure and sacrifice found in he history of the U.S. Marshals service will be a draw for people from across the nation. He says, “In it’s almost 230 years of existence, the U.S. Marshals Service has accumulated many stories to be told – stories from across 94 districts, 50 states and beyond. We will tell them through an emotional perspective and hopefully people will come back again and again. This allows us to dig deep and gives us an amazing job.”

Alice Alt, development director, believes the museum falls in line with the direction of Fort Smith’s development and tourism efforts. She says, “What better way to celebrate America – it’s past, present and future – than through the history of the U.S. Marshals Service.”

The grounds will also feature a trail for walking and biking along the river and picnic areas.

With all that is going on in Fort Smith, you won’t be short of finding something you enjoy. Whether it is art, music, food or history, this town has a few surprises waiting. Come find out today.