How to Cope Without Sports During COVID-19 Pandemic 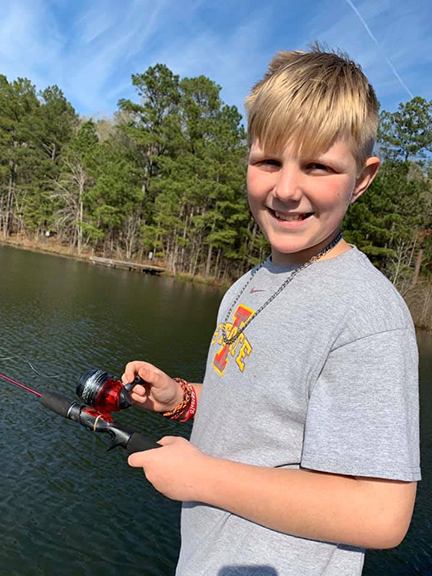 Thursday was supposed to be Opening Day of the Major League Baseball season. While it isn’t a national holiday iIt should be), it is celebrated with exuberance in the Olson House. We don’t agree on our favorite teams, but we do all love baseball. Daddy and J.D. root for the Cubs (Dad loves the Yankees, too), and mom and Luke are die-hard Cardinals fans. We celebrate together and usually watch two or three games that day. Everyone in the house is happy that hope springs eternal and baseball is back.

However, this Thursday was just Thursday. There was no baseball. We enjoyed the unusually warm spring day by eating pizza on our deck and watching a replay of Super Bowl XLI (Bears and Colts). After the NCAA Tournament was canceled all pro sports leagues put on hold, the shock of no MLB Opening Day was lessened. It hurt, but in light of the events of the past two weeks and the crisis our country faces, I’m just numb in regards to a barren sports landscape.

My wife, Sheena, always joked about what I would do without sports. Anyone who knows me understands my obsession with sports is a 24-hour love affair that is a part of who I am and has been for a long time. So, you know this has been tough on me, and I know many of you. Sports is how I decompress and relax. COVID-19 is a scary situation for our country on so many levels. The future is uncertain. Sports is a distraction which helps comfort. A comfort I no longer have – for now.

However, I have coped well. Here are six things that have helped distract me and put my life in proper perspective.

1. Family game night
We are so busy with youth sports with both kids playing that we very rarely have nights at home without much to do. If we do, the four of us normally retreat to our neutral corners with a device and relax. Normally, we eventually pair up and watch sports or a movie together. During the past two weeks, we have past the time by playing more games. I remembered why I never liked Pictionary (I can’t draw worth a flip), and we spent two nights playing a basketball and football trivia game. I don’t know any other 8 and 11 year olds who know that Bobby Knight threw a chair, Rick Barry shot free throws underhand or what ‘The Malice in the Place’ is. I have a feeling we will find time to play more board games.

2. Grilling
It took me one day without sports to retreat to the grill. I threw some exquisite steaks on the day after the NCAA Tournament was canceled. Since then, I have grilled chicken and brats. I will be on the prowl at the grocery store this weekend for some more meat to grill. As a side note, cooking in general,  has been a comfort during these times. I made breakfast in bed for Sheena for our anniversary this week, and she has made some killer meals, including a pork butt, tacos and she found a way to make Ramen fancy for lunch this week.

3. Fishing
Another activity that takes a backseat to a busy sports schedule. We have gone four times in a week. We have only caught two fish (Daddy caught them both), but we have had a good time being outside. J.D., especially, is enjoying it. He always wants to go. I grew up in a state park and went fishing every day in the summer when I was the boys’ ages. Sheena also grew up going to fishing holes. I told them as long as we have open weekends and good weather, we will go. Hopefully, the warm weather continues, and the fish start biting. I also hope this routine continues once we get busier.

4. Watching old games/documentaries
You know I’d have to watch some sports. J.D. and I enjoyed watching Game 5, 6 and 7 of the 2016 World Series in which the Cubs beat the Indians for its first title since 1908. As I mentioned above, we watched Super Bowl XLI together as a family, and I also watched the Giants beat the Patriots on the circus catch by David Tyree which fueled the go-ahead scoring drive and a Giants’ Super Bowl title. The game I’ve enjoyed the most was the first-round 1998 NCAAA Tournament game between No. 4 Ole Miss and No. 13 Valparaiso. Ole Miss had a great team which featured several native Arkansans. Valpo won the game on a buzzer-beater by star Bryce Drew. I watched that entire game in my apartment. I had forgotten, though, that the Rebels could have iced the game but Ansu Sesay missed two free throws, and on the last shot, Perryville’s Keith Carter, who scored more than 20 points, couldn’t corral the rebound, leading to the length-of-the-court inbounds pass by Valpo. J.D. also enjoyed a documentary on quirky 1970s Detroit Tigers pitcher Mark “The Bird” Fidrych. He now wants his jersey.

5. Outdoor sports
Luke’s baseball leagues are shut down, and JD won’t play travel soccer for a while, but we have still been practicing. Luke and I went to the field Thursday night. We haven’t been able to take many ground balls because it has been wet. Thrusday’s warm weather made it playable, so we made our way to the infield. As we stepped on the dirt, he said, “It feels so good to be on a baseball field.” He has no idea how cathartic it is for me to throw BP to him or hit ground balls. Three different times our entire family has played catch in the backyard. I had no idea Sheena was so handy with a first basemen’s mitt. She does need to work on her throwing, however. By the time this is over, she will be using the proper form.

JD is a goal keeper and has had a friend shoot on him. He has also resumed working with a keeper coach. I enjoy watching him and look forward to him trying tackle football for the first time in the fall.

6. The Sports Question of the Day
Two weeks ago, I began posting sports poll questions on social media. We have covered everything from who is the NFL’s greatest running back, to best concession stand food, to the favorite photos of you or your kids in uniform. That particular post really lifted me up. I knew this would help me cope, but I didn’t know how much it would impact my friends and followers. Several of them have contacted me about how much they enjoy the daily discussion.

My parents celebrated their 49th wedding anniversary Friday, and they have been awesome parents to me and my brother. Over the years, they imparted much wisdom. One of their mantras was “You will need to make the best of tough situations.” The COVID-19 crisis fits that bill. Take away the obvious uncertainty and fear factor, and the discomfort of social distancing and not being able to move freely is a major bummer. However, as Arkansas Gov. Asa Hutchinson, who has handled this situation beautifully, points out often – it’s necessary to get back to our everyday routine –including sports for me. So, we grin and bear it and enjoy each other and some of the simple pleasures of family. Those things are more comforting than we know.