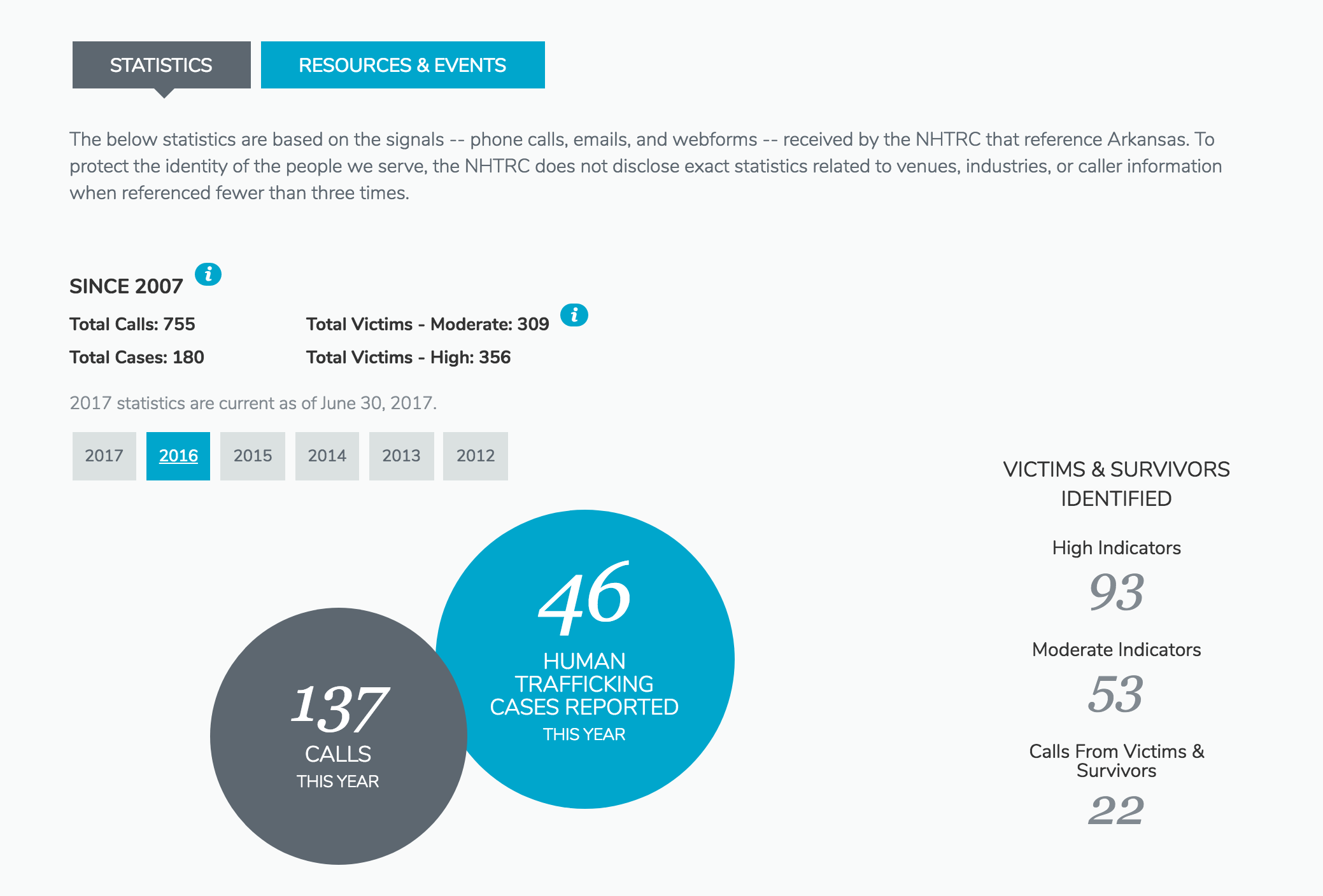 Every so often, Reagan Stanford picks up her cell phone to find a human trafficking victim waiting on the other end, someone who has finally aligned courage and opportunity to reach out for help through the National Human Trafficking Hotline.

“All of the calls for social services that are for Arkansas come to me,” says the crime victims services coordinator. “So what happens is, if they call and they want to give a tip, those tips go to the FBI. But if they just want services or they want to talk to someone, then all those calls come to me. It’s not a flood of calls, but it’s, you know.”

Stanford’s small office at Catholic Charities of Arkansas in Little Rock hardly looks like command central for human trafficking assistance across the whole state, but that’s exactly what it is. It’s a perfect metaphor for the disconnect that so often resides between the shadowy world of human trafficking and those who would help victims out of the darkness.

“It’s supposed to be that people call the national hotline and if they want social services, they refer them to a local service provider,” Stanford says in the standard-issue “it is what it is” tone of those who daily work with the system. “But there aren’t very many [providers] in Arkansas.”

A Crime of Opportunity

Nothing less than modern-day slavery, human trafficking imprisons men and women into lives of sexual servitude, forced labor or both in small towns, on farms and in neighborhoods throughout the nation. Traffickers tend to feed on the lost, the abandoned and the powerless, but beyond that, the issue spirals into so many directions and derivations that’s it a hard picture to assemble accurately.

“I would never use the term ‘typical,’” says Dr. Karen Countryman-Roswurm, executive director of the Center for Combating Human Trafficking (CCHT) at Wichita State University. “There are risk factors, but to say that there is a typical case, absolutely not. Whether you’re talking about the victims or the purchasers, it’s all over the board.”

Many of the most common risk factors for trafficking victims aren’t particularly exotic — disconnect from parents through divorce, incarceration or addiction, runaways or a history of physical or sexual abuse, to name a few. In other words, those neither cared for nor missed by those who are supposed to do both.

“This is a crime of opportunity and it’s a crime to make money. The traffickers and pimps are looking for the means of least resistance,” Stanford says. “Why would you abduct a girl from the suburbs whose parents are going to put up a huge fight and everyone’s going to be out looking for her, when you could just go get a kid off the street? What we’re by and large seeing, it’s not abductions. It’s runaway kids, it’s homeless kids, it’s kids in the foster care system already.”

Perps are also frighteningly pedestrian, which is why Countryman-Roswurm bristles at stereotypes.

“The exploiters, people who purchase people for sex or labor, are all over the place,” she says. “It’s the pastor, it’s the police officer and it’s the weird creepy guy down the street.”

Lack of Education in Arkansas

Worldwide, it is estimated that between 12 and 27 million people are victims, according to U.S. State Department figures. Some sources estimate that between 100,000 and 300,000 individuals are at risk every year for sexual exploitation domestically. But the fact of the matter is, reliable statistics are hard to come by, given how often trafficking is mistaken for something else.

“The picture that the media is putting out is women that are beat up or huddled in a corner and that kind of thing, and that is not what trafficking is in all cases,” says Stanford. “I think we’re doing a better job at identifying it, so it’s hard to know if it’s growing or if we’re just identifying what’s always been there.”

Stanford has led training sessions for law-enforcement personnel to help them better identify trafficking situations and to know how it differs from prostitution. While she experiences her share of intolerance and indifference in these sessions, mostly she sees ignorance and inexperience. Of the six-week initial law-enforcement training local would-be police receive, only two hours are spent on the subject of human trafficking. In this regard, Arkansas is hardly an outlier.

“Whether you’re talking about state law or federal legislation, there’s been a push to educate law enforcement,” says
Countryman-Roswurm. “What we’re finding in our own state and across the country is that folks think they’re doing a good job. They think they understand human trafficking, but what we find when we start educating them or working with them on cases is they don’t know as much as they think they know. From our perspective, in large part that is true because they do not truly utilize the voices of survivor leaders.”

Countryman-Roswurm has found a novel and impactful way to combat this within CCHT itself; many of her employees are themselves trafficking survivors.

“You may be a police officer and you think you know the streets — that’s great. But if you haven’t been a part of that street culture for a long period of time, a training in and of itself is not going to give you all of the education that you need,” she says steadily. “You have to have been there.”

Another element that makes trafficking hard to pin down is that victims are often so physically and psychologically manipulated that they are unable to see the situation for what it is, particularly in the case of young females.

“For most of these girls, no one’s ever loved them without expecting something in return, even their parents or the foster care system,” Stanford says. “Even if you’re in a decent foster home you know these people are being paid to provide that for you and that’s not the same as knowing someone unconditionally loves you. They don’t even know what that is.”

Once a person who seems to show genuine love and concern, such as a predatory boyfriend, comes along, the victim still only understands love as something with strings attached, even if that’s having sex with strangers for money, says Stanford.

Those who do understand what’s really going on often stay silent out of fear of personal harm, threats to loved ones or simply in the belief that there’s no way out. That may help explain why out of almost 27,000 calls to the national hotline last year, less than 50 buzzed through to Stanford’s cell phone.

“So they’re like, ‘I’m living in hell, but I know how to survive it day-to-day.’ And I’m saying, ‘you don’t know me, but I promise I’ll do my best. And if you go to this domestic violence shelter then I’ll try to get you somewhere else.’ That’s not enough reassurance for them to leave where they are. So those are disappointing calls.”

Stanford pauses and shakes her head. It’s nearing the end of September and she’s soon to move to another job, at which time someone else’s cell phone will ring periodically. As of this moment, though, no one knows whose phone that will be.

Know Your Heart: Cardiac Stress and Your Health
September 29, 2017