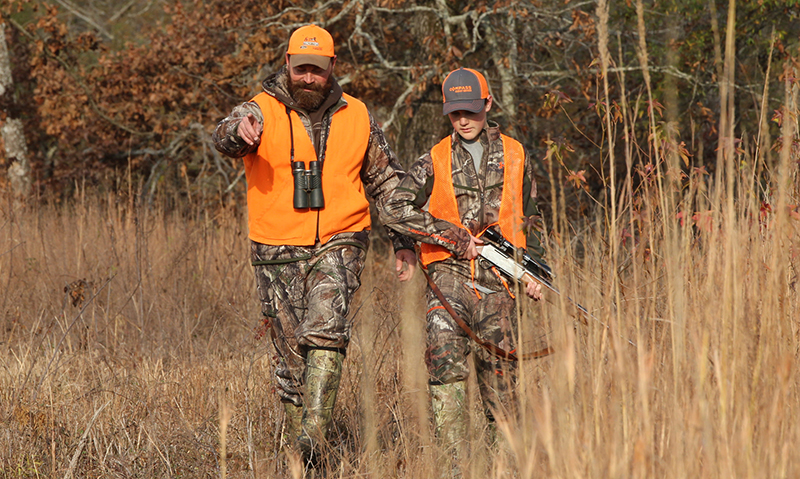 Randy Zellers remembers sitting on the back of a truck’s tailgate eating Cadbury Fruit & Nut bars with his father during one of his first hunting trips as a child.

Zellers, who is an assistant chief of communications for the Arkansas Game and Fish Commission, also reminisces on the cold hunting trips when he’d huddle in the floorboard of his father’s truck to get as much warmth from the vehicle’s heater vents.

“Some of the best hunts I remember, I can’t tell you if we got many ducks or harvested any deer,” Zellers said. “But I can remember the other things.”

Now, as the Arkansas hunting seasons are in full swing this fall, there’s an increase in new hunters heading to the woods and making new memories. It’s a shift in the trend of hunting over the past decade – perhaps driven, oddly, by the COVID-19 pandemic – and as the newbies begin their hunts for squirrels, ducks, deer, turkeys and other animals, longtime hunters like Zellers offer several tips to make the experience enjoyable.

“Hunters need to focus on the memories,” he said.

Fewer people have taken up hunting over the last few decades. In the 1980s, about 17 million hunting licenses were issued in the U.S. At the start of this decade, that number dwindled to 11.5 million. 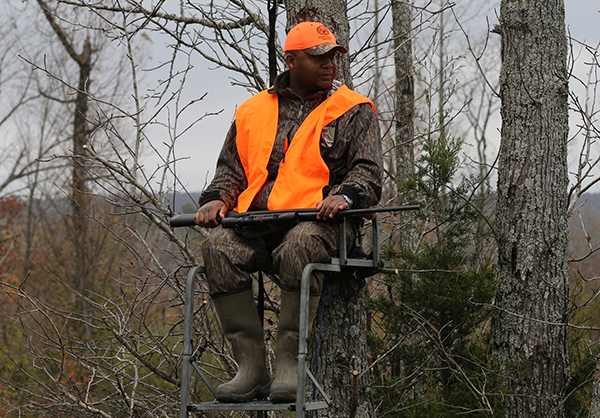 The decline can be blamed on several reasons. Urbanization is one factor. As populations grow, there are fewer areas for hunting. A lack of free time for those wanting to hunt, development of more private farmland for those who hunt without licenses, economics and a simple change in demographics, both in population and socialization, are other reasons.

Last year, 293,356 Arkansans bought hunting licenses, representing 9.7% of the state’s population. That ranks Arkansas as the 15th highest state with the most registered hunters per capita. South Dakota, with 24.1% of its residents registered to hunt, ranks first. With only 0.7% of its population holding hunting licenses, California is last in the country.

But there seems to be an uptick in hunting in The Natural State.

Taylor Denniston, the vice president of Fort Thompson, a major hunting outlet in Sherwood, is seeing an increase in customers.

“There is a resurgence of people coming back,” he said. “Some are literally starting over. A lot spurs from guys who don’t know about hunting, but their friends do. They go with friends or family and are hooked.”

Both Denniston and Zellers credit the pandemic for leading some into hunting. With the phrase “social distancing” becoming a mantra during the virus’ peaks, what better way to observe that concept than being out in the woods? The Game and Fish Commission tailored a hunter recruitment campaign based on that, Zellers said. 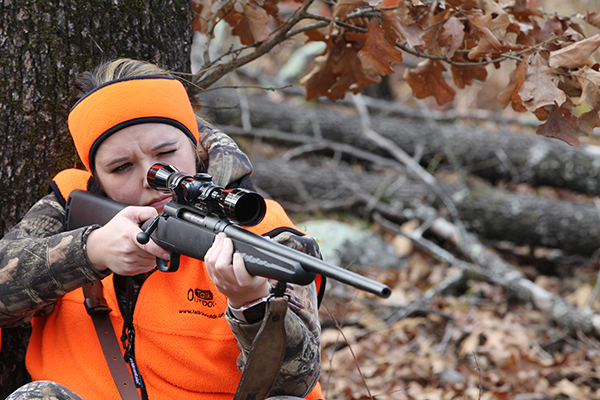 Families, often quarantined together because of the virus, draw closer and that age-old hunting tradition of passing knowledge down to the youngsters thrives, Zellers said.

So, what do first-time hunters need to know and do before searching for wildlife and to ensure positive experiences?

The first step is obvious, hunters say. People need to find the right equipment. Choosing a weapon is key. The type of rifle or shotgun needed depends upon the type of hunting. A .22-caliber rifle is good for squirrel hunting, but impossible for hunting duck. A more powerful rifle is needed for bigger game like deer and elk.

“Getting to know your firearm is the biggest, most important thing,” Zellers said. “It can be intimidating. You need to feel comfortable carrying a firearm in the woods.”

The Game and Fish Commission offers scores of youth shooting programs and safety classes. Zellers suggested hunters visit local shooting ranges to practice with their weapons before hitting the woods. You don’t want the first time you pull your rifle’s trigger when you see a deer stalking through brush.

“Be familiar with what you have,” he said.

Ammunition is another necessary item.

Keeping warm may be one of the more important aspects, Denniston said.

“You’re out there waist deep in water waiting for ducks,” he said. “You want good waders that don’t leak.”

He said warm jackets are also a good investment. 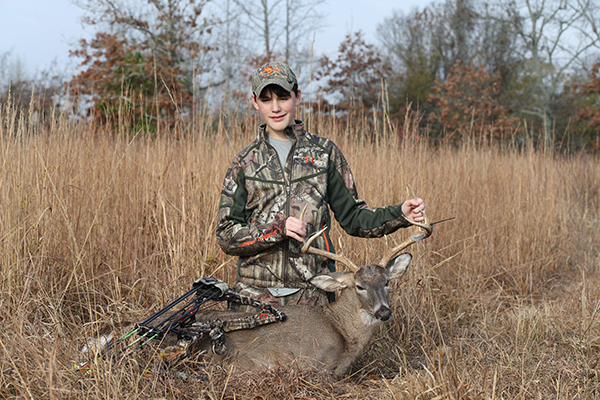 “You don’t want to ruin a hunting trip by being cold all day,” he said. “You want to stay warm and dry.”

Of course, there are many other pieces of equipment available. Hunters may need duck decoys, calls, gloves, warm clothing, rifle scopes, binoculars, glasses, containers to keep drinks and food warm, compasses, tree stands and harnesses, boots and shoes, for example.

Fort Thompson, located on U.S. 67 and 167 in Sherwood across from Sam’s Club and near the McCain Mall, opened in 1931 as a grocery store on East Broadway in North Little Rock. The store sold sporting goods along with groceries and eventually branched out into the full-stocked hunting store that it is today. Denniston’s family bought the business in 1985 and moved to its present location in 2006. 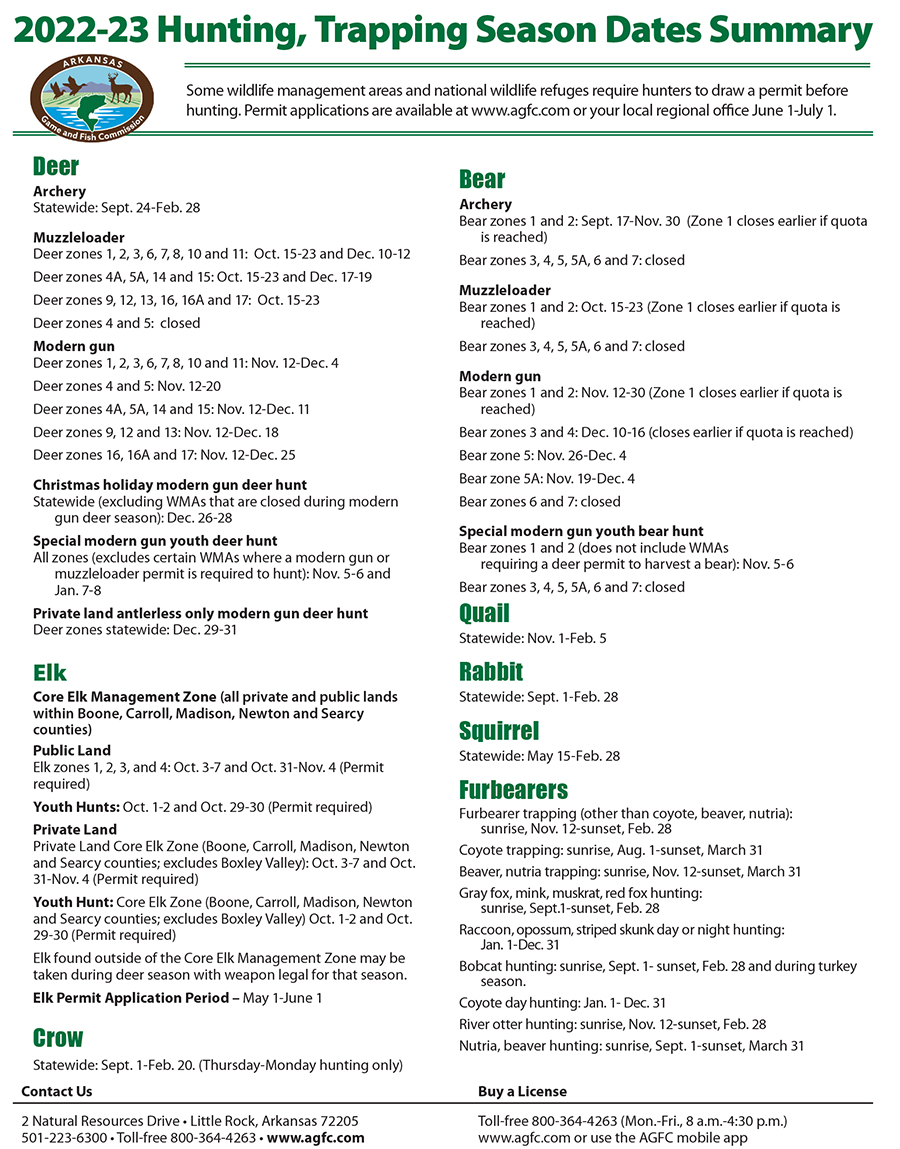 Zellers advised first-time hunters to consider the game they are seeking.

“Many go straight to deer hunting,” he said. “That’s the most popular game in Arkansas.”

He said first-time hunters may succumb to the pressures of deer hunting. If they don’t get a large buck on their first hunt, they may become discouraged. Zellers said he fell for that years ago when he went on a mule deer hunt in Nebraska.

Within the first 10 minutes of the hunt, Zellers saw a mule deer, but opted not to shoot at it, thinking it was too small.

“I didn’t see another one the rest of the day,” he said. “I let the pressure of getting the ‘big deer’ in my head, and I was worried about what people would say.”

“You’ll see more squirrels, and there are more opportunities to get some,” he said. “You don’t have to be quiet like you do with deer hunting, and you can move around the land more.

“There’s not as much precision required to bag a squirrel.”

Zellers said hunting squirrels also gives the hunter a chance to see the woods and look for any signs of deer that he or she can use for later deer hunts.

Squirrel hunting is a bit more leisurely, and it allows the hunter to inspect the location and terrain. Sneaking through deer woods for the first time in predawn hours may sound like a typical hunting adventure. But suddenly finding an unknown canyon or waterfall in that element is not a good idea. 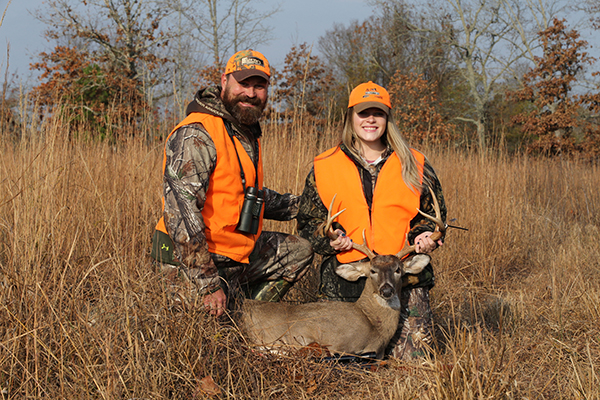 Denniston and Zellers both advocate finding mentors for first-time hunters.

“Some people get introduced to shooting programs while in school,” Zellers said. “But then they get sidetracked and rejoin as adults. It’s best to find a mentor friend.”

Churches may offer hunting mentors, and there are social clubs that provide hunting tips, he said. Game and Fish Commission Nature Centers also hold yearly mentor hunts and other programs.

“You can learn the basics from YouTube and from books,” Zellers said. “Just the other day, I watched a video of a guy fishing for crappie on [Lake] Nimrod. I didn’t learn a lot other than crappie are there in Nimrod.

“A mentor is someone who will walk with you through the rough terrain and the mud.”

Zellers has been taking his son hunting for the past two years and has tailored those instructional times based on his son’s interest.

“Go at the pace of the person who is learning,” he said. “My son is good for four or five hours before he gets tired of it. Bring snacks, make it comfortable for them.

Zellers says, “The memories are part of the fun. Learning is part of the hunting experience.” 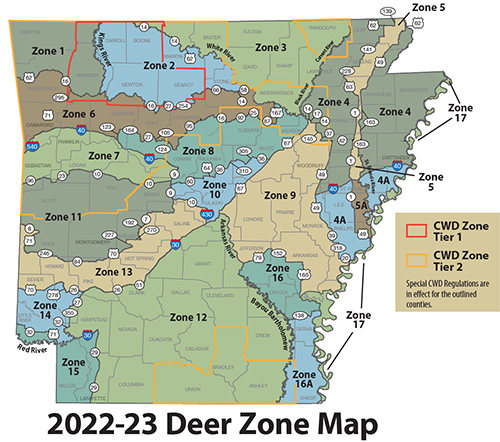 Hunter safety is vital, and having a mentor can help the novice hunter as well. Scores of injuries occur each year when hunters fall from deer stands attached to trees. The International Hunter Education Association reports that about 500 people die in tree stand accidents, and another 6,000 are injured each year. 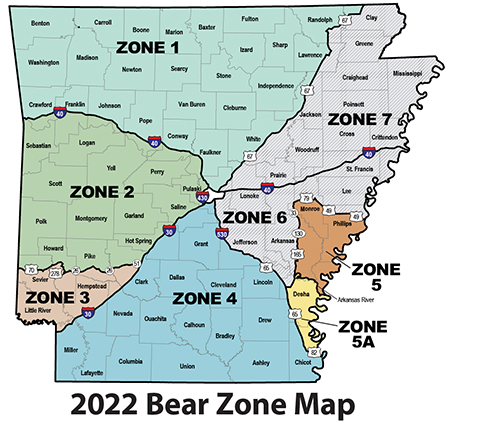 Some falls happen when hunters fall asleep, but others result from faulty harnesses, poorly attached stands to trees or a lack of skill. A mentor can help avoid some of those pitfalls, Zellers said.

“It’s best not to go by yourself on your first hunt,” Denniston added.

Yet another important tip for the new hunter is to let others know where you will be hunting and when you plan to return home. Cellphone service could be limited in rural areas, and if a hunter is injured and can’t make it back, others know where to start looking.

A Craighead County Sheriff’s Deputy ended her law enforcement career when she fell from a deer stand and shattered her ankle last year. She was able to make it back to her vehicle and then to a hospital; it wasn’t carelessness, she said. She just slipped when getting into the stand and fell.

Take hunter safety and hunter education classes before beginning to hunt, Zellers said. “Those classes can provide in-person experience, and they can walk you through situations.

“There’s a lot of information that goes into hunting.”

Finally, hunters should recognize and enjoy the bonding experiences with other hunters.

Wading in cold water while waiting for ducks to show up may not sound too enticing. But the camaraderie and shared experiences are what makes hunting more enjoyable, Zellers said.

Deer hunting is a solitary sport and can get boring, Zellers said. “You’re alone in the woods for hours waiting for deer. Then, there’s deer camp.”

Sometimes, like with fishing, the stories of the ones that got away are more fun. 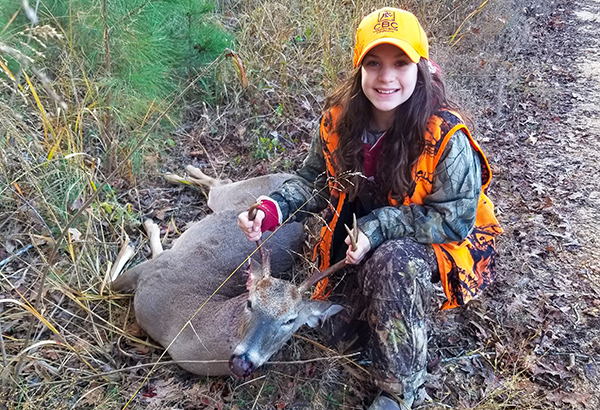 “Arkansas hunters harvest less than an average of one deer a person per year,” he said. “It’s not like [hunting shows] on television that portray deer parading out after five minutes.

“Most hunters are like, ‘Where are all the deer?’ ” he added. “Don’t be fooled by those shows. They give a false sense of reality.”

The increase in new hunters gives Zellers and Denniston hope for the hunting future. The Game and Fish Commission relies of the sale of hunting and fishing licenses in part, along with a one-eighth cent sales tax passed by state voters in 1996. However, license sales only make up about 30% of the commission’s budget, and the commission shares the sales tax revenues with the Arkansas State Parks and the state Natural Heritage Commission.

A federal tax placed on the sale of rifles, ammunition, boats and trolling motors also helps fund the Game and Fish Commission, and federal funding is apportioned to states based upon the number of active hunters they have.

“When we lose a hunter, it has a spiral effect,” Zellers said. “It’s not just the license sales we lose. There’s also the apportionment and the new people those hunters may bring in.”

“We’re seeing a big mix of ages coming in,” Denniston said. “The majority, though, is younger people. People who are 30 and under.

“All those who have been hunting for a while are still going. But we’re not getting as many of them now. We are seeing those who are just starting are coming back.” 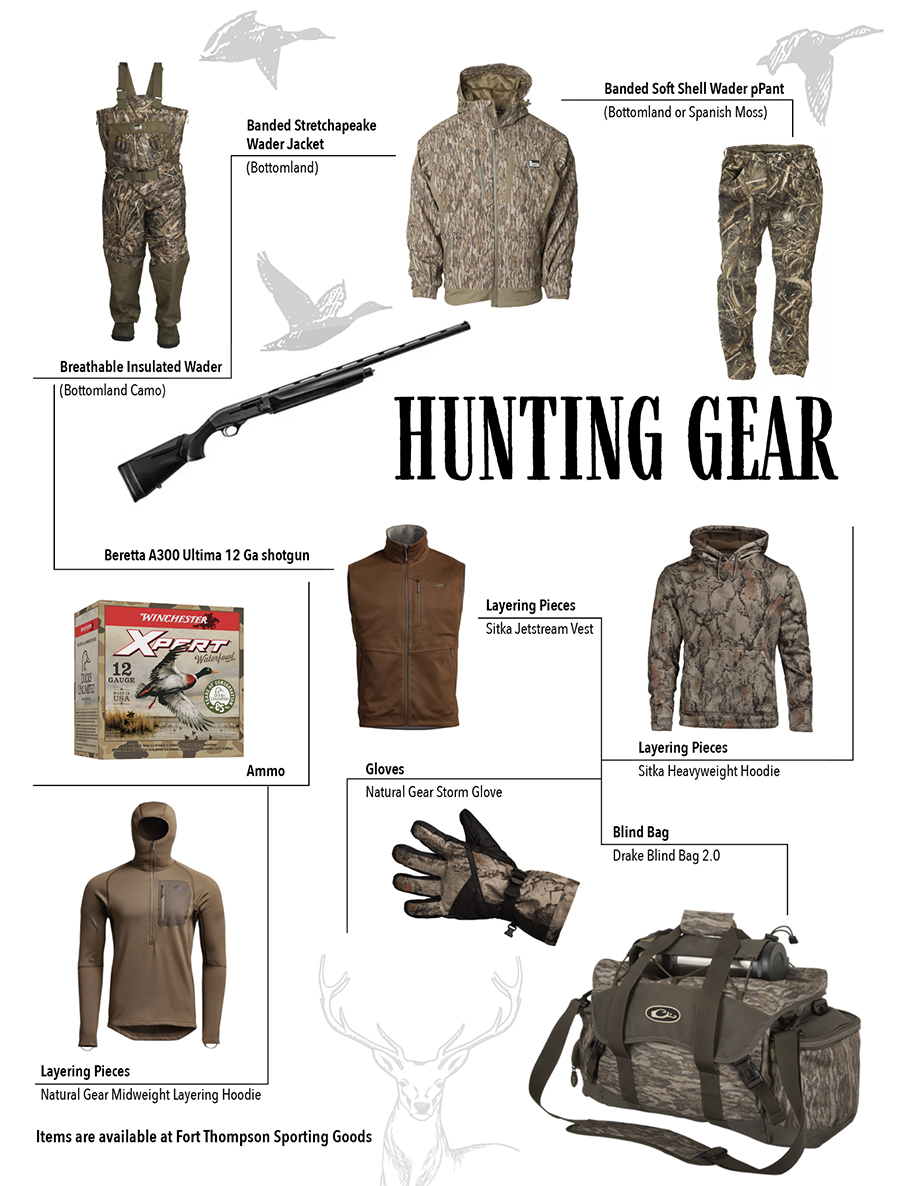 READ ALSO: Giving the Gift of the Outdoors: Arkansas Game and Fish Commission