Hutchinson Issues Guidance for Places of Worships, Directives for Indoor and Outdoor Venues 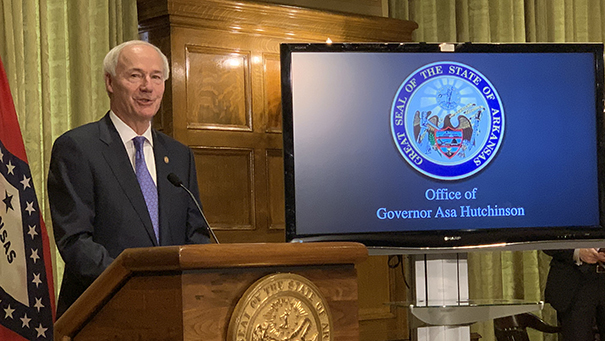 State officials have issued two directives for indoor and outdoor venues, as well as guidance for places of worship, during the COVID-19 public health crisis.

Gov. Asa Hutchinson unveiled his promised announcements for places of worship, indoor venues and outdoor venues during his daily COVID-19 press briefing. Hutchinson told reporters on April 22 that he would be making an announcement on these venues on May 4.

For places of worship, Hutchinson issued a set of guidance, effective May 4. Under this guidance, state officials are “strongly” encouraging online platforms but these venues will be allowed to gather with restrictions.

These restrictions include signs advising no entry if individuals have had recent fever, symptoms or contact with COVID-19 positives; maintaining six-foot physical distances; and wearing face coverings inside by anyone over the age of 10 years old. Hand sanitizing stations at entrances are also encouraged.

Worship leaders addressing congregations and singers will be allowed to remove masks while speaking or performing, but 12-foot physical distances are required at these times.

“These guidelines that we’ve put out I think will help any of those venues resume as safely as possible whenever they decide to resume with in-person services again,” Arkansas Department of Health Secretary Dr. Nathaniel Smith said.

There must be a 12-foot distance between performers and audiences with a six-foot distancing in seating, except for family groups, and every other row must be unoccupied in seating. There also must be marked lines to monitor social distancing.

Smith admitted that the directive’s restrictions may seem limiting, but they are part of the state’s efforts to phase in the state’s reopening. Limiting audiences to 50 or fewer people is part of the state’s plan to decrease the possibility of infection and make it easier to perform contact investigations in the event of a community transmission.

Testing 50 or fewer people, Smith said, is easier than testing thousands of people, which would be would be “difficult and time-consuming.”

However, the May 18 directive for indoor venues does not include casinos. Smith said that a separate directive will be issued for casinos to address specific needs.

Smith expects the casino directive to be take effect around the same time as the indoor venue directive.