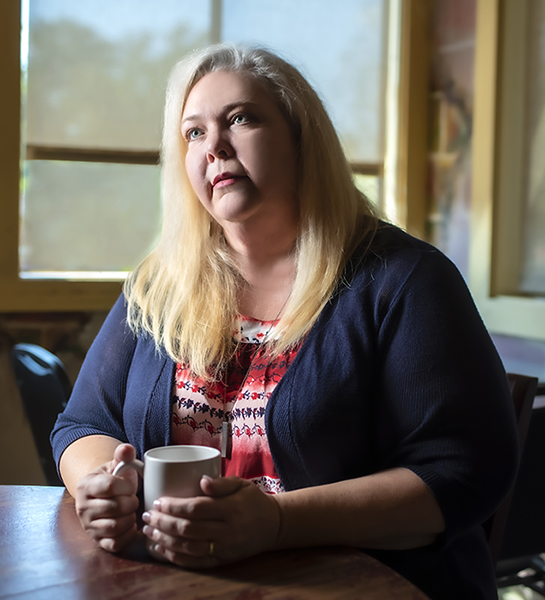 Kathy Bryan, 53, of Heber Springs, counts herself among the survivors of modern-day slavery. As a young teen, she was groomed for exploitation. Now, she is the director of operations for the Rebecca Bender Initiative — the nonprofit awareness campaign of fellow survivor, award-winning social entrepreneur, author and speaker Rebecca Bender that helps other survivors rebuild their lives. Since 2014, Bryan has worked with more than 550 survivors.

Speaking to AY About You on a recent afternoon, Bryan sits at a corner table in a local coffee shop ready to talk about her two-year experience in terror in which she was trafficked for sex. Tucking her long blonde hair behind her ear, her diamond wedding rings catch the sunlight as she tells her story — one she couldn’t speak of until 2011. Until that point, even her husband didn’t know what she endured.

Bryan was born the oldest of five and raised in a rural area in northern New York. Her parents divorced when she was 3, and it wasn’t until she was in her early teens that she spoke to her father again. In the meantime, her mother remarried a man named Bob, who was in the Navy. The family moved to Virginia, and Bryan’s stepfather shipped out, leaving his family behind for six months.

“I was the oldest of five kids, and I kind of became the second mom in my family,” Bryan says. “I had a lot of loss — I had several father figures in and out of my life, and my grandfather died on my 10th birthday.”

Bryan says she met a girl named Noreen who was in her English class at her new school. Because Noreen’s house was quiet and just 10 blocks away, the girls would walk there to do homework.

“On that 10-block walk is where I met the man who trafficked me,” she remembers. “He was standing outside of a townhome and said, ‘Hi.’”

She replied and the two would begin regular greetings and eventually hold conversations. She spoke of her dreams and family hardships, and he listened.

“He encouraged me and counselled me in this area that was so important to me,” she says. “He built up my dream.”

After several months, the man took her lunches and became a mentor of sorts, Bryan says.

“Traffickers are master manipulators, if you have a vulnerability, they will find it and use it to their advantage,” she says.

Then a few months later, Bryan says he asked her to go dancing.

“I was almost 16, and I was so excited,” she says. “I got in the car, and he said he had forgotten something at his house.”

She followed him inside and he transformed from “perfection” to “monster” in an instant.

She says he kissed her then another man appeared. The two raped and sodomized her for more than two hours before the men left her alone. She went into a bathroom, hoping to escape through a window that tragically wasn’t there.

“I was trapped in the bathroom, so I wrapped a towel around myself and planned to make a run for it,” she recalls. “As soon as I opened the door, he stepped into the hall. He said my sister’s name.”

He threatened the same harm to her younger sister if Bryan didn’t do exactly what he told her. Thinking she would be protecting her sister, she complied.

For two years, Bryan lived a double life, coming home from school, doing homework, helping get her siblings to bed, then would slip out to meet her trafficker. He would take her to homes around the surrounding area as a sex slave, then back home. She slept only a few hours and then started the days over again.

“I was in survival mode,” she says. “It wasn’t long before the trauma made me feel as if I wasn’t even human anymore. I didn’t feel emotion anymore. I could display emotion for the situation, but I didn’t feel it.”

Bryan’s grades began to drop, and she says her mother knew something was going on, but Bryan couldn’t talk about it.

“Somehow [my trafficker] always knew what my family was doing,” she says. “By the time it was all over, he knew everyone in my family. They just thought he was just someone from the neighborhood.”

Bryan believes God had a hand in her escape from her nightmare when her trafficker let her out of his car in a shopping center late one night.

“He said, ‘don’t go to any of the houses I took you to or contact anyone. I don’t want to ever see you again. This is the only way I can save you,’” she says.

Since that day, Bryan has worked to piece together her memories and come to terms with what happened. She uses her own recovery to help survivors through her work at the Rebecca Bender Initiative.

“Barriers [victims] face coming out are so enormous, they need help to have a life after and allow them to choose what it should be,” she says.

Bryan did become concerned there may have been other victims of her trafficker and in 2015 contacted a prosecutor in Virginia. She told her story to investigators. A newly appointed prosecutor chose not to prosecute her trafficker — he is still out there.

Now, Bryan says her focus is on the goodness in people, despite the wickedness she experienced. She aims to educate and assist those victimized by human trafficking.

In every community, in every state across the nation, the vulnerable are targeted on the basis of age, sex, associations or simply availability. Arkansas is not immune to the criminal practice of trafficking and ranks 33rd in reported cases, according to the National Human Trafficking Hotline.

“Know what your kids are doing online,” Bryan advises. “Have a relationship with your child and build a foundation of, ‘you can tell me anything.’ You have to be that person they can run to.”

Scott Ellington, prosecuting attorney for the second judicial district of Arkansas, says not only parents should be aware, but educators, police officers and people in the community should know some signs.

“Be awake.” Ellington says, emphatically. “The public needs to know that if a child shows up with new items that the whereabouts can not be determined, inquire heartily and investigate who their friends are. A 14- or 15-year-old doesn’t necessarily think it is a dangerous situation with an older person, (who could potentially be a trafficker).”

The detention center staff, he says, sees many victims of trafficking come through its doors. Many teenagers who live in rural areas are targets of traffickers with a promise of a better, more exciting life.

“The public needs to know; it’s happening in their own backyards,” he says.

Beth Kratochvil is an advocate and educator for Into the Light, a ministry headquartered in Mountain Home that has outreach for victims.

“Traffickers target people with disabilities and teens who lack family and a network. The trafficker fills those gaps.” she says.

“Parents don’t know what their kids are doing online,” Pickering says. “[But] They won’t let their kids go to the bathroom by themselves and are on the watch for the panel van in the neighborhood.”

Kratochvil chimes in, “75 percent met their traffickers online, and 100 percent went with them willingly.”

Then there are the victims who are sold by their own families. Kids are sometimes sold for drugs and other items by parents and other family members.

“A lot of traffickers go to rural areas and take them to other areas,” Bryan says. “For a trafficker, it’s about power, control and money. It’s a business.”

Things to know about trafficking:

Age, demographics and race do not determine a potential victim, although young people who are isolated socially or online can be more vulnerable.

Not all human trafficking is related to sex crimes. Traffickers will also exploit victims for the drug trade or labor.

Parents, educators and others should look for things out of place, including clothing, inexplicable possessions and behavior changes.

To report a potential trafficking situation, call local law enforcement upon any suspicion.