In the Home Stretch at the Pine Hill Ranch

[dropcap]T[/dropcap]o say the Pine Hill Ranch is a dream for Bob Mullenax is an understatement. The sprawling property near Little Rock off West Colonel Glenn and Congo Ferndale Road and the beautiful plans he has for it have become more of an obsession. Mullenax has planned the state-of-the-art equine, banquet and conference facility down to the very last detail.

Mullenax bought the 250-acre estate with a grand plan for a multi-phase endeavor complete with a lodge, riding academy, American Saddlebred training stable, banquet and conference facility and dog-training park. The hope for the massive undertaking is to provide a world-class training facility for horses, with a local focus on enhancing the American Saddlebred horse breed in Arkansas.

Mullenax’s impeccably decorated office inside the already completed lodge is covered in architectural drawings that he is watching come to life. “I’m glad we chose to do the project in phases,” says Mullenax in a room outside his office. Behind him sits his stately desk, situated underneath a large steer with massive white horns. His residence quarters are to the south of the office so he doesn’t have to travel far to get home. “The longer I stay here, the more the details change,” he says, gesturing to the many iterations of the phases that have now piled up.

Pine Hill Ranch has a country-like atmosphere and comfortable setting.

Construction has recently begun on the lesson barn, which will include a 12-stall barn with luxurious 12-x-12 stalls, spacious tack rooms, an instructor’s office and a locker room for riders. Also underway is a 15,000-square foot covered arena, complete with an open-air bleacher spectator area and a heated and air-conditioned viewing lounge.

The lesson barn will be home to 12 first-class school horses available to help teach riders as young as 4 years old. All around the shady carefully planned pine-covered property, trails are being perfected for eight miles of riding and an area for birthday parties and summer camps is in the works. The Pine Hill Lodge has already been home to one wedding; the next will be held in early October behind the lodge.

The next phase includes the banquet facility, followed by the prestigious show barn. The show barn will be a members-only facility for the American Saddlebred only. “This area is so undeveloped when it comes to this breed,” says Mullenax. “We’re actually going to create our own market. We’re going to teach kids in the right way and teach them excellence in every part of the equestrian experience.” 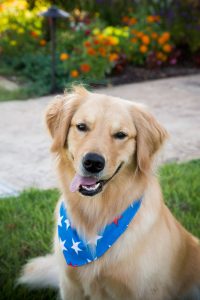 A sweet dog out on the land.

Mullenax’s love of horses has been ingrained in him. He grew up around horses and always loved riding. As he got older, his interest in the American Saddlebred piqued. In 2004 he worked an entire summer feeding horses to save $1,000 to buy his first American Saddlebred horse.

“It’s all I had,” says Mullenax of the small sum he had saved to purchase the prestigious breed. He found a mare owned by a local veterinarian in Cherokee, Ohio, that he was interested in. So Mullenax traveled to Ohio to see more. The veterinarian was skeptical of the horse and told him “I’ve got one right here that’s a thousand bucks. Her neck is too short, her ears are too long and she doesn’t have any action.”

“She had never been hauled in a trailer — I’m not sure she ever even had a halter on,” he recalls. They loaded the young horse into the trailer and she was hauled the nearly 1,000 miles back to Arkansas.

“I’m so excited,” he says, recalling the moment. “They finally drive up and they’re here. They open the door to this trailer and this poor little darling was so scared. She came running out of there and stepped on my foot almost ran over me. I don’t think she stopped kicking for about an hour. She finally just settled down and let me come up to her,” Mullenax says. “Needless to say, she was never expected to be a show horse.”

The 1-year-old filly was named Red Hot Momma and affectionately called Girlfriend. Mullenax enlisted Carol Jones, of American Acres in Little Rock, to train her. By the time Red Hot Momma was 3, she was entering horse shows and winning. By the time she was 4, in 2008, she had made it to the National Championship.

She was ridden by Carrie Kessler, a close friend and current Pine Hill Ranch design consultant. “I told myself I would be happy with a top-10 spot,” says Mullenax. “Then they called 10 and it wasn’t her name, then nine, then 8, and on and on. And then they called the reserve champion and we knew that we had won. I jumped the fence I was so excited.”

Everything Red Hot Momma had on her that day was borrowed. “I was acting as the groom — I was cleaning her and cleaning her feet,” says Mullenax through eyes that tear up at the retelling of the story. His clothes were dirty from the day’s grooming and he says no one thought he could be her owner.

It was a humble beginning for this horseman and not one he will soon forget. Red Hot Momma went on to have an illustrious career, winning six world championships before her retirement in 2015.

“She was never ever expected to be a show horse, much less one that could do what she did,” says Mullenax.

The story of Red Hot Momma has become a kind of philosophy for Mullenax. He puts his head down and concentrates on a goal and works hard to achieve it. He’s a stickler for details, but he has had some help with those along the way. Carrie Kessler has been instrumental in planning and decorating. Kessler is not only an award-winning horsewoman, she is a well-known dog trainer in the Little Rock area. She will also be the primary trainer at the dog-training facility. She trained Mullenax’s Golden Retriever Sally — the official Pine HIll Ranch greeter.

“When Bob got Sally he fell back in love with dogs,” says Kessler. “It might be that we just start with a dog park or it might be a full-blown boarding and training facility. It’s still in the planning phase.”

“Carrie proves there’s a market for it. She’s busy all the time training and boarding dogs,” says Mullenax. “With as much land as we have, I think it could be a wonderful addition.”

Kessler notes that Mullenax doesn’t do anything simply. When she was decorating the lodge, which she thought was all her responsibility, he snuck the giant steer over his desk and a moose head that adorns the beautiful fireplace.

“Bob has a mission and that is to provide amazing upscale experiences that you can’t get anywhere else,” she says. Whether it’s a wedding, equine experience or a conference – he has to go above and beyond.”

The Pine Hill Ranch is expected to open in the spring of 2018.

Pine Hill Ranch is home to a lodge decorated by Carrie Kessler.

Know Your Heart: Cardiac Stress and Your Health
September 29, 2017