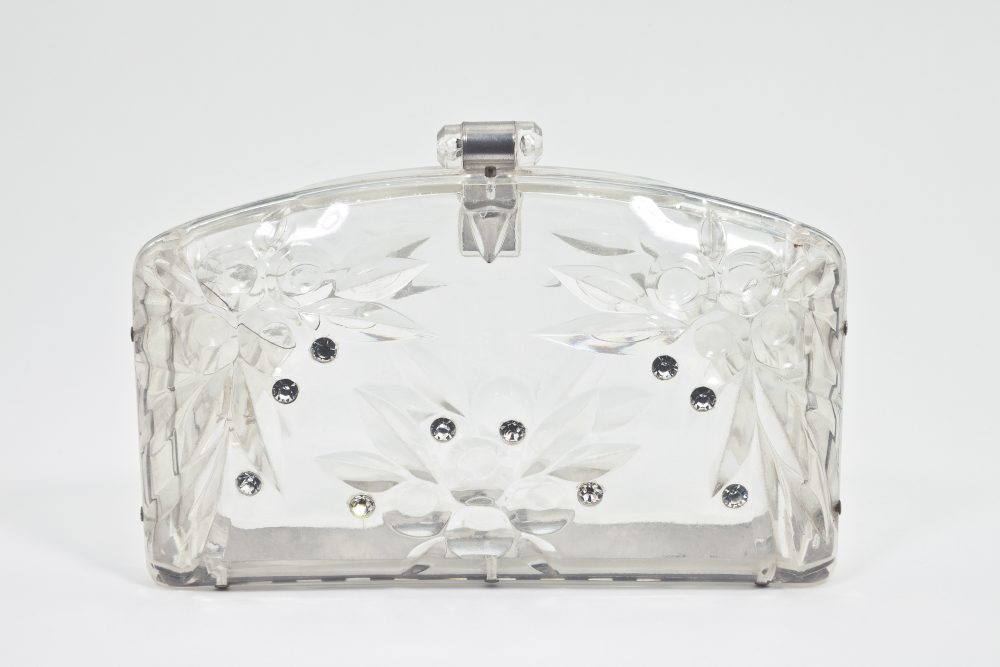 A new temporary exhibit at ESSE Purse Museum in Little Rock’s SoMa neighborhood highlights an unexpected mid-century trend in handbag design: plastic. “The Power of Plastics: Reshaping Mid-century Fashion” focuses primarily on the 1930s, ’40s and ’50s, when plastics were experiencing a design heyday after the introduction of acrylic glass in 1933 (first known as Plexiglas) and its development into Lucite later in the decade. The bags in the exhibit come from the incredible personal collection of ESSE founder Anita Davis and range in style from small clutches to larger traveling cases, all sturdily shiny and spanning the color spectrum from crystal clear to dark, swirling blues. One featured artist was known for sandwiching gold mesh and flecks between layers of plastic in his designs; several prominent designers hailed from Miami, where the new material enjoyed great popularity.

“This was really when consumerism in general was taking off,” says Abby Olivier, the museum’s program director. “Things were cheaper, and plastic could be mass produced.” This, combined with an excess of Lucite after World War Two, made for an explosion of new, decorative products; not just handbags, but combs, hair accessories, jewelry, glasses, compacts—and other things that would look pretty inside a handbag that was now, for the first time, revealing its contents. It’s easy to imagine how exciting it must have been for people to dream up creative ways to use this malleable new miracle product, which could be modified repeatedly and treated to mimic expensive (and environmentally unfriendly) materials like ivory and tortoiseshell. “It was the first time that people thought, ‘We can create anything we want,’ ” says Olivier.

A special case, a sort of addendum to the exhibit, focuses on plastics today and highlights the way a material once used to create beautiful, functional and decorative accessories is now thought of as something cheap to be used for a short time and thrown away, littering our landscape and clogging our waterways. This is one of the hallmarks of ESSE, where eye candy becomes food for thought: Objets d’art are always presented in a context greater than the objects themselves.

“The Power of Plastics” runs through January 7, 2018; the opening reception will feature snacks and libations and offers museum access at a 50 percent discounted rate. For more information, please visit ESSE Purse Museum.