An Inside Look at Tonight’s 58th Annual Delta Exhibition

Founded over fifty years ago with the goal of featuring contemporary work by Arkansas-based artists, the show has become an institution in its own rite and features a guest juror each year.

Brian Lang, Chief Curator and Curator of Contemporary Craft at the center, believes that the exhibit holds true to its roots. “Arkansas is well-represented this year. … The Delta demonstrates the Art Center’s continued commitment to exhibiting the work of Arkansas artists,” he says.

Each year, postcards go out in the late fall, calling for work. This year a total of 1038 pieces were sent in by 457 artists, and ultimately, 52 were chosen from 30 artists.

Lang continues, “There’s a smaller number of works in the show this year. … It’s a much looser show ­– there’s more space to really allow the breathing room the pieces need.”

This year’s guest juror, Elizabeth K. Garvey, is co-founder and owner of Garvey-Simon Art Access, Inc. in New York. In the past jurors have included gallery owners, working artists, art critics, directors and curators from Arkansas and beyond. The changing juror brings a unique, varied element to the show.

Lang says, “Having a new juror ensures different perspectives. … The great thing is that the show is always different every year.”

In April, the final list of participating artists was released with plenty of locals included:

We talked with a few local artists to get you pumped for tonight’s opening reception.

Mia Hall, the head of UALR’s Furniture Design department and practicing artist, was ecstatic to learn she would be in the show. She says, “Being chosen for the Delta exhibition is, of course, a great honor.” 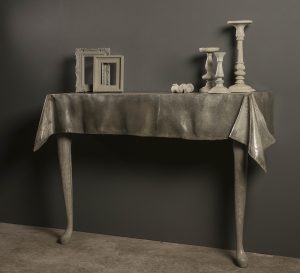 Hall was happy to see that UALR had great representation within the exhibit. She continues, “I am especially happy that UALR did so well – six of the artists are full-time or adjunct faculty and two are recent graduate students!”

Nathaniel Roe, a recent UALR graduate, is also excited to be a part of the Delta. He says, “This is my second time to be accepted into the Delta, and I am truly honored to have two pieces selected for this year’s show. I entered the show again this year because, after completing my master thesis at UALR, I had a body of work I feel more fully represents my photographic and artistic vision. I am always thrilled yet humbled when my work is accepted into juried shows, and I am incredibly excited to attend the opening reception with my family [this] evening and to be able to share my work with others.”

Bryan Frazier, local artist and music man, was elated at the news. He says, “This exhibition is widely known by artists and collectors and it is a top honor to be accepted. This is the first year I’ve entered and was shocked to not only be accepted but to have two of my works get in.”

The artist looks to a local gallery for helping him achieve this honor, specifically to M2 Gallery, which is owned by Mac Murphy. He says, “I owe a lot of my recent success as an artist to Mac Murphy … Mac secured my first commission last year that led to selling and commissioning over 100 paintings in 2015. This has given me a great amount of focus and has led to not only the Delta but also numerous sales and commissions this year. My work is currently and exclusively available at M2 Gallery in Little Rock.”

Don’t miss the opening reception tonight at the Arkansas Arts Center. A lecture will begin at 6 p.m., and juror Elizabeth Garvey will be on hand to announce the winners of the $2500 Grand Award and the two $750 Delta Awards. A reception will follow at 6:30 and a $250 Contemporaries Delta Award will be selected. The event is free for members, and $15 for non-members.