All the Rage: Intermittent Fasting is a Health Plan with Weight Loss Benefits 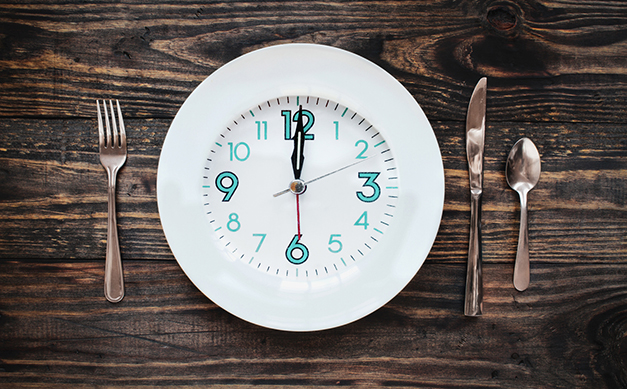 So with more than two years under my (smaller) belt, I have acquired a bit of knowledge about it. So whether you’re unfamiliar (come on, surely you have heard of it, right?) or have your Ph.D in it, let’s go back over the basics.

First, you need to know that fasting is one of the oldest disciplines known to man. Many religions incorporate it into their faith, so this isn’t some new-fangled diet. It’s not a diet. It’s a way of eating. Alert: This IS NOT starvation. This is time-restricted eating where you eat what you want just in a shorter time frame. So instead of three hots and a few snacks, let’s narrow down the amount of time you are eating and watch your health improve.

It’s true that intermittent fasting is known as the “health plan with a side effect of weight loss.” That’s been coined by the woman I refer to as the mother of intermittent fasting. Her name is Gin Stephens. She’s the author of “Delay Don’t Deny,” the compendium written in layman’s terms about fasting. She has her doctorate in education, so she knows her way around research and how to explain it.

She and Melanie Avalon host a podcast, the Intermittent Fasting podcast, and the two of them have done a lot of research on fasting. The science of it. There are terms like autophagy (au-toph-agee) you need to familiarize yourself with. It won the Nobel Prize in Physiology and Medicine in 2016 and is the body’s astounding ability to rid the body of old sick cells in a cellular cleanout.

According to www.bulletproof.com, benefits of autophagy include “reduced inflammation and improvement in daily bodily function; prevention or delay of neurodegenerative diseases and increased longevity.” This occurs after about a 16-18 hour fast. When I say “fast,” I mean no food or flavors for a certain amount of time. So that means, listen carefully, only black coffee, unsweetened black tea, water or sparkling water. No flavors. No sweeteners. No cream. Nothing. If you do, then you aren’t fasting. Any flavors at all cause the body to release insulin. Insulin is what ushers glucose to the cells. It’s an important but overused hormone.

READ MORE: My Life as an Intermittent Faster

Jason Fung, MD, the author of “The Obesity Code” and “The Diabetes Code” says that we are bunch of fatties (my term, not his. He’s way more professional than I) because of our constant barrage of insulin. The interminable insulin release causes hormone imbalances, and he says that obesity isn’t a caloric problem “but a hormonal problem.” Hormones like ghrelin and leptin are out of sync. One regulates hunger; the other satiety. When you constantly eat or drink flavors, even zero calorie ones, those hormones can’t regulate your hunger and fullness and guess what? You develop a weight problem. And remember that insulin that is always at play? Have you talked to someone who was recently diagnosed with Type 2 diabetes and was prescribed insulin? Your friend will tell you he/she has gained weight because too much insulin means your body isn’t burning fat for fuel but the glucose that your liver is storing.

And the reason your sugar-free soda breaks your fast is that your pancreas doesn’t read labels. So it releases insulin to help regulate your glucose (it starts to lower it), but it also breaks the fast. Immediately.

The common questions you have are: What can I eat? When can I eat?

First, what can you eat? Whatever you want. Stephens’ book says to DELAY YOUR EATING, DON’T DENY YOURSELF. Now if you want to lose weight, your particular body might want you to cut down on carbs including sugar and alcohol. But I don’t know that. You’ll have to tweak it to work for you.

Second, when can you eat? You pick a 6-hour window that works for you. My favorite is 2pm-6pm. Yes. You read that right. My feasting window is about four hours long. It’s because I get full and hardly eat past a 4-hour window. Not always, but often. This week, I celebrated my birthday with a dinner at 6pm, so I opened my feasting window at about 4pm and closed it around 8pm. I wanted to enjoy a margarita at Local Lime and have birthday cake. And I use the term “feasting” as when I eat; “fasting” is when I fast. So I am either feasting or fasting. On Christmas Day, I had an 8-hour window. Why? Because I have a life to live. This isn’t a prison sentence but the opposite. It is the picture of freedom. And I love it. I’ll never go back to all-day eating. I have so much energy (almost too much) during the fast. Once I eat, I get sleepy. It’s crazy.

PRO TIP: If you find yourself with a headache at first, eat some Himalayan salt (the pink stuff). It’s just an electrolyte imbalance. You’ll live.

DISCLAIMER: I am not a medical doctor, and this is not medical advice. But it is advice from someone who’s walked the walk for 26 months, and I’ve seen people cancel bariatric surgeries and get off Type 2 diabetes medicine among others. Give it a try. But if you’re under 18, pregnant or nursing, please don’t. The rest of you with serious health conditions might want to talk to a doctor. But make sure he/she is an informed health care provider and not nonplussed by your request for information. Intermittent fasting is a game changer.