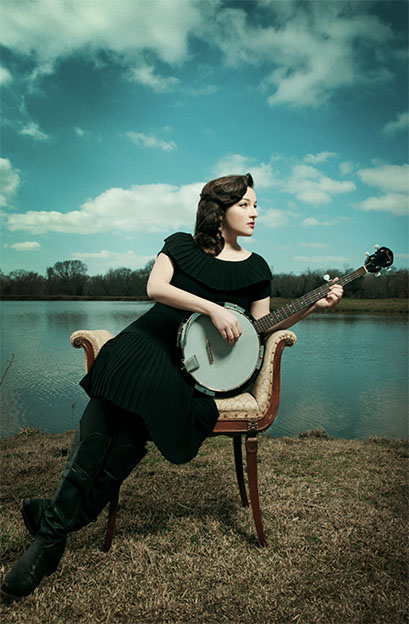 While on Hollywood Beach in Miami, the wind crackles behind Bonnie Montgomery’s voice over the telephone. She’s the kind of woman that mixes work and play in style and you can hear her humble gratitude in the way she gushes about having “a little gig” that gives her time on the beach. AY’s grateful too, since we got to catch up with Bonnie about her beginnings, current projects and future plans.

AY: How did you start playing music?

BM: I’ve been a musician since I was a little girl. My family started taking me to get lessons when I was three. Then I studied classical and went into classical music in college and got two degrees in classical music. It’s probably been about ten years since then and I’ve been playing in a country band instead of classical. I’ve always been a musician. It’s the only thing I know.

AY: I know you describe your music as country, but do you think that there are a lot of classical elements to it? Or do you define it as just country?

BM: I think that it does have a lot of classical elements for sure.  I think certain genres of country music have a lot of classical elements, like the Golden Years of Patsy Cline, the RCA studios having the full string section, Roy Orbison…It’s really interesting to me how classical some country music does sound. So I don’t feel like I’m really breaking out of the genre that hard, except for maybe one or two  songs that I’ve recorded that have only had classical instrumentation. But yeah! I do think it fits into the country genre.

AY: Okay! I do think it’s still country but I think that, with your music, it feels easy to hear the classical elements in it.

BM: Oh, that’s cool! I’m glad! I’m glad that I’m able to do that in the studio because I have so many other players that are also classically trained so we just “go there.”

AY: When did you decide that you wanted to go from being a classical performer to a country band that tours and releases albums?

BM: I went to the master’s level and I got my graduate degree from the University of Missouri-Kansas City, the Conservatory of Music. I had been in formal education for seven years without a break really. I think there was just this sort of liberation that I felt when I was done with the degree. I started wanting to write songs any way that I wanted to and not have anyone critique them or have them fit into a certain formula or structure. It was really cool. When I started to finish up my studies is when I started to really hear my own voice come out in song. And I could actually give that the attention that it deserved.

I had ideas all through my formal education but I pushed them to the side because I was studying Beethoven and Puccini – I figured I better learn from the best. But then I started having feelings and thoughts that were coming out in songs so I went with that and I had so much fun! Then I found other musicians that were crazy enough to want to play those songs with me and we just went from there.

AY: What are you working on right now? What are some current projects that you want others to know about?

BM: I’m working on cutting a single with Rosie Flores, who is a Texas-based artist, a legend of rockabilly-punk and country music. She’s amazing. There’s a Rosie Flores day in Austin! She’s a pioneer and so amazing. We’re co-writing a song and getting in the studio to cut it on June 11. We’re going to cut in a studio in Texas, really close to where I’ve been staying in Wimberly. It’s called Yellow Dog Studios.

We’re going to release that around the time I’ll be playing some shows with Ray Wylie Hubbard in Nashville in August.

I’m hoping to cut an entire album produced by Rosie; she’s going to produce the single as well as play on it. She plays bad-to-the-bone, Keith Richards-style guitar. She’s also an amazing singer and songwriter and she wants to produce it–which I think is really cool, to have a female-produced album. Maybe she’ll cut in different places around the country where she trusts and knows the studios and the players, like Nashville and LA, and just do a few songs here and there. Then, come out with the album next summer. Right now, that’s my goal: get through the single and release it in August. Then start ramping up to release the new one early next summer. That’s my plan!

I’m also always writing little piano pieces and symphonic ideas. I do that in my quiet time when I have it, because my heart is there too still and I do have classical musicians that want to premier those too when I have them. Unfortunately, that’s just a side note for now. I’d love to be a classical composer full time for a stretch, but I can’t – too much is going on.

AY: I know you said a little bit about your future plans, with the single and Rosie producing your next album, but what do you have in mind farther out? Maybe in the next five years?

BM: I’d like to write another opera. I also want to be able to put out an album once every two years, if I can. I’d love to tour at least coast to coast every year and hopefully get to where I’m touring overseas in Europe. And… I’d like to have a residence somewhere in Spain and maybe a classic car where I get to drive around in the country in Texas. Those are my goals and I’m working toward them.

Bonnie Montgomery won’t have any trouble accomplishing her dreams. Already an Arkansas favorite, Bonnie plays tonight at the Arkansas Country Music Awards in Maumelle and won’t be back until the vinyl release party at South on Main with Summer Dean on June 18.