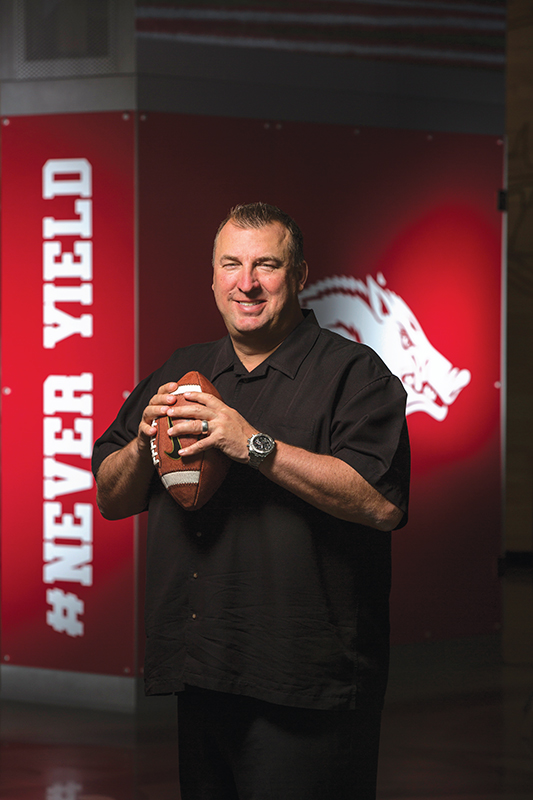 [dropcap]T[/dropcap]he University of Arkansas captivated the college football world by naming Bret Bielema the 32nd head coach in Razorback history on December 2012. Since arriving in Fayetteville, Bielema has in turn captivated the passionate Razorback fan base with the culture he is creating and the standards to which he is upholding the program.

Since his arrival and over 51 games, Bielema, who is the only head coach in Arkansas history to win back-to-back bowl games, has dramatically changed the direction of the program. From his first 20 games as head coach to his most recent 20, Arkansas gone from tied for 14th in the SEC in wins over that span to a tie for fourth with a 13-7 mark. His three straight winning seasons at Arkansas have featured seven wins over ranked teams, including five against top 15 opponents and three on the road.

Bielema’s recruitment philosophy of building a program on “uncommon” men has yielded record-setting results in the classroom. Arkansas posted a 2.94 team GPA in the spring of 2015, the highest recorded mark on record. During Bielema’s four seasons, Arkansas leads the SEC with 139 student-athletes on the SEC Fall Academic Honor Roll, while the 40 honorees in 2015 and 39 in 2016 are the top two marks in the conference since he joined the league.

He’s been married to his wife Jen since 2012 and they welcomed their first child, a baby girl, this summer.

Where did you grow up? Indiana

What’s your favorite thing about living in Arkansas? The people and the weather.

What are you passionate about? Winning on and off the field.

Favorite place in the world: The Caribbean

One word that describes you: Consistent

What attracted you to your career? The chance to help young men chase their dreams.

What is the accomplishment you’re most proud of? Earning a scholarship after walking on at the University of Iowa.

What are you most excited about for the upcoming year? New faces and new opportunities.

Which living person do you most admire? My parents.

Which talent would you most like to have? To play the guitar.