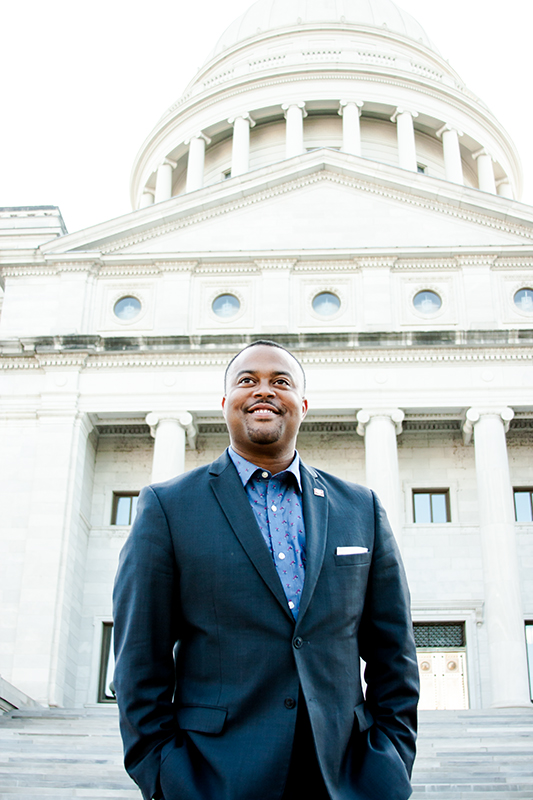 [dropcap]C[/dropcap]harles says he is “Little Rock born and raised.” He attended Central High School as a teenager, then went to Grinnell College in Iowa, a private liberal arts school. After graduation, he returned to Arkansas, where he worked in banking and insurance before serving as a founding administrator of the Little Rock Preparatory Academy. Charles also started his own business. He ran for office in 2014, winning a seat in the state House of Representatives. He is currently serving his second term in the House.

Charles was the first legislator to introduce a bill to separate the Martin Luther King Jr. and Robert E. Lee holidays in Arkansas. The initial effort failed, but the holidays were divided two years later. Charles says the 2015 proposal is one of the highlights of his political career, along with legislation like the Democracy Act, which would have required automatic voter registration. Charles has also sponsored bills to change the burden of proof on the death penalty and to encourage Arkansas cities to conduct business locally, with companies inside their cities.

What’s an interesting fact about you that would surprise others?  I am a classically trained bassist.

What are you passionate about:    Expanding educational opportunities to everyone, creating generational wealth for underserved communities and fighting injustices.

Favorite place in the world:  Wherever my wife and kids are, preferably on a lake.

One word that describes you:  Charismatic

What attracted you to your career?  Service. I am mission-driven to make our city and state better before I leave this world. And I plan on doing that by serving my neighbors and my community. As a state representative, I have the opportunity to serve in a role where I can positively affect the lives of my constituents and neighbors.

What do you love about what you do? Being able to fight every day for my community and what I believe in.

Personal motto: “If not us, then who? If not now, then when?”

What is the accomplishment you’re most proud of?  Being elected to the House of Representatives to serve my community and being able to fight every day for them and what I believe in.