Italy in the Ozarks 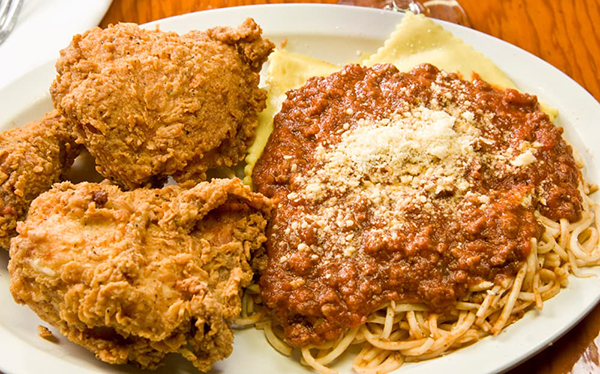 Italy in the Ozarks

Fried chicken and spaghetti, anyone? Tontitown – a town in Northwest Arkansas, rich in Italian-American history and known for its delicious Italian food – offers this unique Italian/Southern combination. If you ask Venesian Inn restaurant owner Jeff Bowen, “It’s like chicken and waffles; it just goes together.” It’s not fancy; it’s not gourmet. It’s fried bone-in chicken (or boneless breast if you order it) and a scoop of spaghetti on the side with meat sauce on top. Think of it as Italian Southern fusion.

This down-home dish of spaghetti and chicken is a historical icon in its own right, and continues to be the food star of Tontitown today. You can find it every August at the Tontitown Grape Festival and year-round at the Venesian Inn restaurant. It’s just one of the many cultural gifts spurred by the arrival of Italian immigrants to Arkansas in the late 1800s. 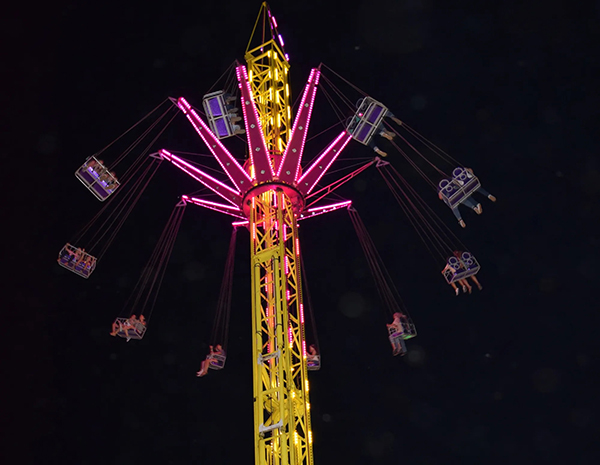 Every August, Tontitown remembers its Italian heritage with the largest carnival in Northwest Arkansas. This year (August 2-6) marks the 123rd year for this event that is all about tradition. The Grape Festival’s chairman Ryan Pianalto explains “It’s about honoring the Italian spirit – their hardships and sacrifices from the past generations and passing them down. Everyone who comes to the festival gets to be a part of that for a short time. The festival celebrates the human spirit – even today. It’s made up entirely of volunteers from St. Joseph’s Catholic Church – many who take personal vacations to make this event work.”

People come from all over to attend the Grape Festival every year. “It’s beloved because there is literally something for everyone in the family,” Pianalto adds. “We have amazing Italian food, arts and crafts, great rides and free musical entertainment. There is no charge for admission and no charge to park. A family could come out and not spend a dime if that’s what they choose, and still have a great night out! For seven years running, NWA has voted the Tontitown Grape Festival their #1 fair/event/festival, and we take that to heart. All of our volunteers want to make sure that everyone who comes out has an amazing time and will plan on coming back every year.” 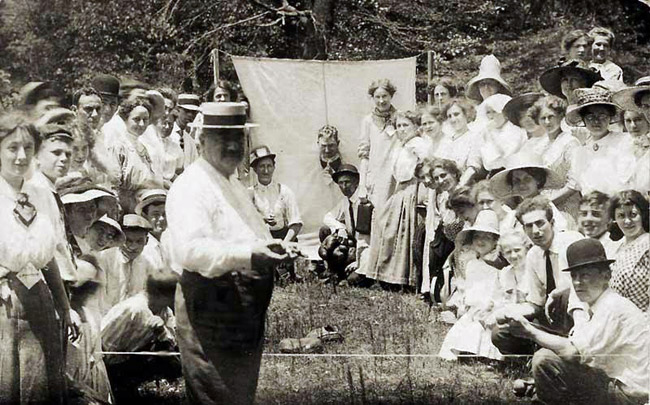 Attendees of the Tontitown Grape Festival; circa early 20th century.

Tontitown’s Grape Festival is the largest in NWA with rides for all ages. Every day, different local bands take the stage to offer live music. There’s even an old-fashioned grape stomp. Anyone can jump in and have a try at stomping grapes in the old wine-making tradition. These grapes won’t actually be used for making wine, although old-school winemakers do say the foot provides more control over the wine’s flavor profile, thus the honoring of this tradition.

And every year, a young woman is crowned Queen Concordia. The first queen was crowned in 1926. Nowadays, three young ladies volunteer to spend a large part of their summer selling raffle tickets for a grand prize giveaway. In previous years, the prize has been a truck. This year, the prize was a Pioneer Hondaline ATV. Whoever sells the most is crowned Queen.

How it all Began 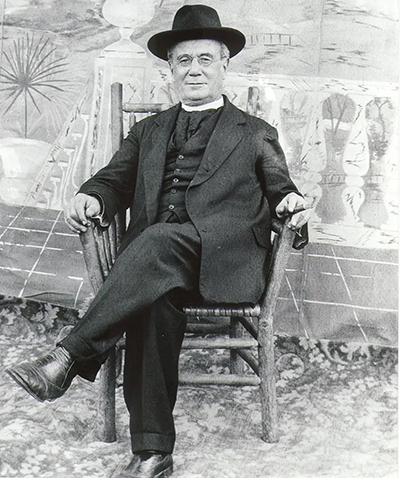 The history of the Grape Festival goes all the way back to the first year Italian immigrants settled in Tontitown, well over a century ago. A missionary named Father Bandini, who was passionate about helping his fellow countrymen, convinced a group of Italians to wait until he could secure land before making the long trip to the United States. He found a large area near Springdale, Arkansas that was being sold for only two or three dollars an acre because the rocky soil made it difficult to farm. 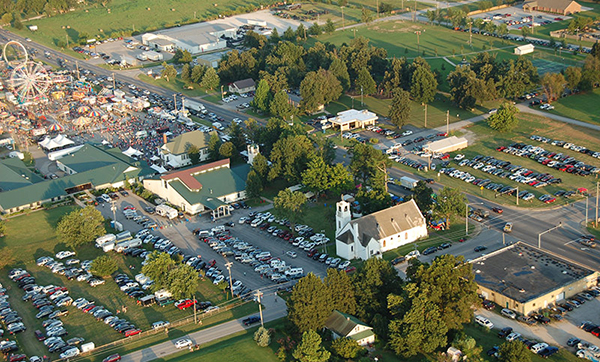 Aerial view of the Tontitown Grape Festival. Photo courtesy of the City of Tontitown.

In January 1898, the first family followed Father Bandini to this spot in Northwest Arkansas and before three months had passed, more than 40 families had arrived. In August of that year, they all gathered together to give thanks for their first harvest with a special church mass followed by a celebration with food, music and dancing – the very first Tontitown Festival. 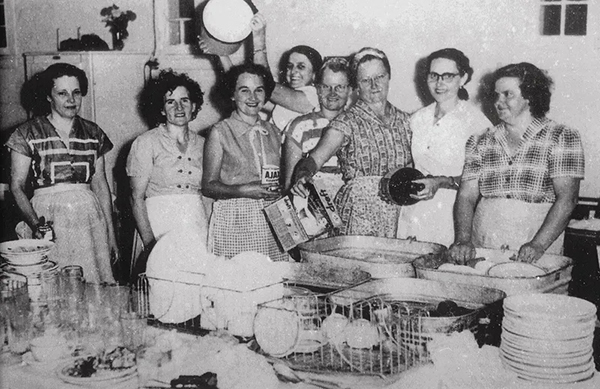 The colony was named Tontitown after Henri De Tonti, the Italian chief lieutenant who had established an earlier colony in Arkansas. Father Bandini became Tontitown’s pastor and eventually was elected mayor. By 1909, Tontitown had grown to 1400 acres (about twice the area of Central Park) and was officially incorporated. The yearly festival tradition continued with a church service, booths, games, rides and that wonderful Italian food.

As time went on, the festival began to draw outsiders and become very well-known. In 1932, it became a three-day event and added the tradition of selecting a Grape Festival queen. This was also the year Tontitown began to serve its famous Italian spaghetti dinners to the public. Tontitown’s popularity was evident by 1971 when CBS came to film parts of the festival, including grape judging, crowning Queen Concordia and the spaghetti dinners.

The Venesian Inn has been carrying on the chicken and spaghetti tradition since it opened its doors in 1947. It originally opened under the ownership of Germano Gasparotto, an Italian by birth who sold it a few years later to John and Mary Granata – also native Italians. The restaurant has remained under that family ever since.

Jeff Bowen, who now helps run the restaurant, says his great-grandparents had been part of the original group who helped prepare food for the annual festival. His great-grandmother and his great-aunt were some of the older church ladies who would meet at the bottom floor of the old school building and spend days making bread rolls and pasta. To this day, the St. Joseph church volunteers continue to spend days making home-made rolls and pasta in preparation for the festival. When the Venesian Inn opened its doors 75 years ago, it did so with the purpose of offering this popular spaghetti and chicken year-round so the public wouldn’t have to wait a whole year.

Some have wondered, does the Venesian Inn use Great-Grandma Mary Granata’s original recipe?

“I can’t prove it, but as far as I know, yes. This is the way she made it,” Bowen answers. “As far as I know everything is still the same.” Without giving away any secrets, Bowen reveals that everything in the restaurant is homemade. “We still roll out our dough every day to make our pasta. It’s made just like regular egg noodles but it’s just… you know, when you care about something we’re just going to put a little more love into it, I guess.” Also, garlic. Bowen says they use lots of garlic. 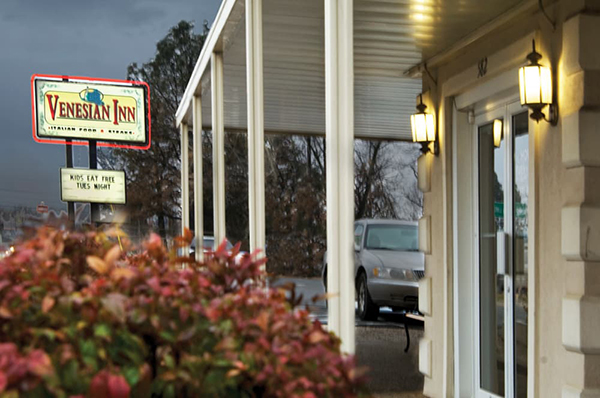 His great-aunt Alice Granata took over the restaurant early on. “She was a pistol,” Bowen recalls. “She just came in saying, ‘Hey, this is what I can get. We’re going to fry up some chicken.’” In 1947, flying in calamari from Italy for a more traditional Italian dish was impossible, so she went with what was easily accessible in the Ozarks – chicken – and the rest is history.