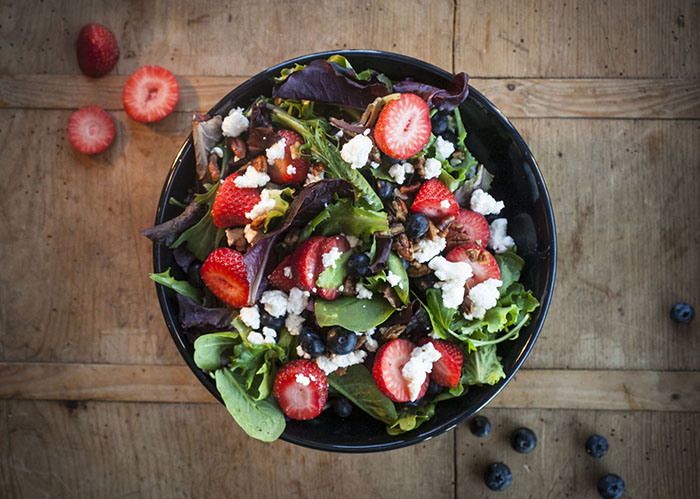 Changes in eating habits became necessary, and necessary is rarely fun. My verve for food struck an iceberg, chopped it up and served it on one grim plate of static leaves after another to try and keep my physical dimensions in check.

Why do I tell you that? Because to hear my words, you must understand my story. And this story is about salad and the uneasy path that I and a lot of people like me have had to travel from years of carnivorous living to coming to grips with greens.

Oh, don’t get me wrong, there had always been raw vegetable dishes at our house growing up. I didn’t even particularly mind them, being as they were these magnificent layered creations; the lettuce mere mortar holding together strata of crumbled bacon, shredded cheese and mayo or Miracle Whip, depending on your leanings.

Homemade potato salad and coleslaw were also routine; I mean, why else did they put those dividers in paper plates? But the hierarchy was clear: You always used the bigger space for the cookout’s good stuff, not the bunny chow. Sadly, those days are long gone. 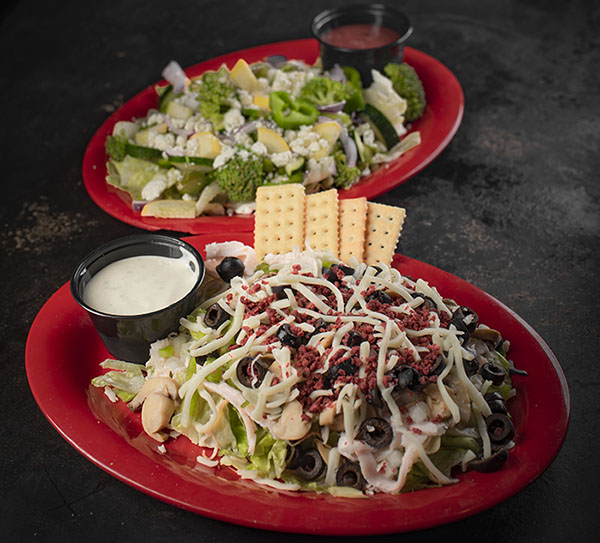 Do I sound bitter? I don’t mean to. Anything, even the soulless salad, can be redeemed if done well. And in Arkansas, there are some places that do it exceedingly so. Take U.S. Pizza for instance and the aptly-named Salad Supreme, an assemblage they’ve been making since the first restaurant opened in North Little Rock’s Levy neighborhood in 1972.

“I remember this tiny little store in Levy, and we would just have a line out the door, people lining up for salads,” says Mark Waller, now manager of the Fayetteville location on Dickson Street.

It’s rare for a recipe to hit right out of the gate, much less survive almost 50 years, without any substantive tinkering. (To be totally transparent, they have expanded the protein you can get on it from just ham to also turkey, fajita chicken or a combo.) U.S Pizza’s headliner salad is one such anomaly, having struck a combination of texture, color and flavor of which generations of customers can’t seem to get enough.

“We can’t change that. No, we can’t change the salad recipe,” Waller says with a note of terror in his voice. “There are too many people who are extremely fond of it the way it is right now. We might add a different salad, but we’d better not mess with the Salad Supreme.”

The dish is a combination of elements both maddeningly simple and deliciously mysterious. Anyone who orders one knows what’s in it — mixed lettuce, chopped onions, green bell peppers, black olives, mushrooms, mozzarella and bacon bits. But it’s the daily execution that makes it all come together perfectly. 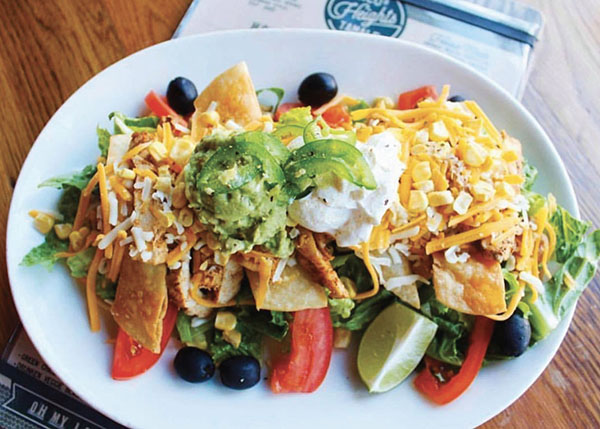 “The one thing is, it’s consistent across all the stores,” Waller says. “We go to great lengths to make sure we have as fresh a product as we can get. Sometimes that’s challenging; you’ve got to watch the produce coming in the door and make sure that it’s up to the quality that we expect.”

“We get lettuce, and we prepare the onions and green bell peppers every day. Depending on the store, like the Rodney Parham store [in Little Rock] where they do great lunch business every day, we have employees who just stand there and make salads.”

The whole thing is crowned with your choice of dressing but, barring food sensitivities, why anyone would stray from the original house dressing — which I say is a creamy Italian, but y’all seem to think is ranch — is beyond me. Not surprisingly, Waller is as tight-lipped about what’s in it, as he is terrified of the idea of ever running out.

“If we ever run out of that we’ll have trouble,” he says, only half-kidding. “Every day we make our house dressing. That’s just been a staple for us from day one. It goes great on everything we sell. If you’re dining with someone who doesn’t order house dressing, you’d better order a side of it, or you’re not going to get all of yours.”

Evidence shows cavemen munched on greens, particularly in lean hunting spells. As National Geographic reports in “The Evolution of Diet,” paleo-biologists have discovered starch granules from plants on fossil teeth and stone tools, suggesting humans may have been eating grains and tubers, however begrudgingly, for at least 100,000 years.

Something closer to what most of us know as salad started showing up among the Greeks and Romans. These concoctions consisted of mixed greens flavored with salt and olive oil, writes a Huffington Post piece that, in conjunction with salad dressing company Hidden Valley, traced the evolution of salad. Aristotle himself preached the benefits of Swiss chard, and Hippocrates clashed with critics over how raw vegetables should only be eaten before the main dish, not after — history’s first non-beef beef, if you will.

Salads took some time off during the Dark Ages, then returned in medieval times and have been with us ever since. However, much of what we know as classic salads are relatively modern inventions. Coleslaw appeared in the late 1800s; chicken salad and tuna salad were invented around the turn of the 20th century; pasta, taco and Jello salads all came in the 1960s.

Last year, Americans ate just over a pound of lettuce per month per person, reports Statistica, the highest mark since 2000 (not counting 2016 and 2017 where, as a nation, we lost our collective minds, pushing annual per capita consumption to 14.5 and 15 pounds, respectively). And here’s something that might surprise you: For all the bluster about young people turning to vegetarian or vegan diets, only 60 percent of younger millennials reported to YouGov Omnibus they liked or loved salad, compared to 90 percent of people over 55. 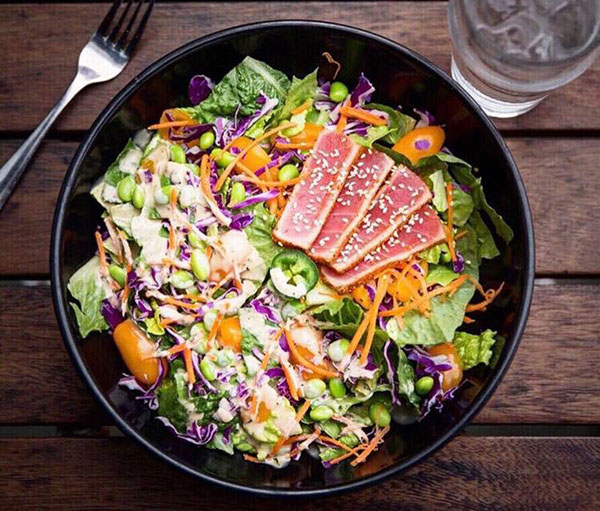 And why? Because, as I said, virtually anything done well enough will command respect over time, and salads are no different. Take ZAZA in Little Rock’s Heights neighborhood, an eatery built entirely on wood-fired pizza and salads so good they even score points with committed carnivores. Talk with Scott McGehee, who founded the place, and you quickly understand why.

“When you’re making a great salad, you’re focusing on each one of these individual ingredients,” he says. “With the lettuce, if you don’t dry it properly, then you have a ton of water that’s diluting the salad. If you slice the jalapeños too thick and you get a bite of jalapeño, it’s a different experience. If the dressing is under-salted, then you don’t pull all of those flavors together and bring all of the potential out. It’s the same with the amount of acid that you use.

“So, yeah, it’s a perfect balance, but it’s also a mixture of, ‘If that lettuce is a tiny bit brown, toss it in the trash.’ If the lettuce is brown, everything else is ruined. If the sliced red bell peppers are slimy, it ruins the whole thing. That’s the key to a great salad.”

McGehee is such a nut about the salad as a centerpiece he’s brought equal passion to the salads he’s created at sister restaurants Local Lime, Heights Taco and Tamale Co. and Big Orange — home to one of my top three salads in the state, the BLT Wedge.

“I love the salads at Big Orange, and I put eight salads on that menu for a reason,” McGehee says. “The tagline is ‘Burgers, Salads and Shakes,’ because nine years ago, when we opened the first location, we had to attract people who don’t like burgers to a burger restaurant. We had to expand and cast a wider net. So, I thought that was really an important piece of that concept. Today, people go there for salads.”

Partially as a perk of being a partner and partially due to a chef’s fascination with new tastes, McGehee doesn’t have to limit himself to what’s on the board at any of his Yellow Rocket Concepts restaurants. Which is good because when asked, he can’t narrow down to a favorite among those many salads anyway, often just creating something entirely new to suit his taste in that moment. 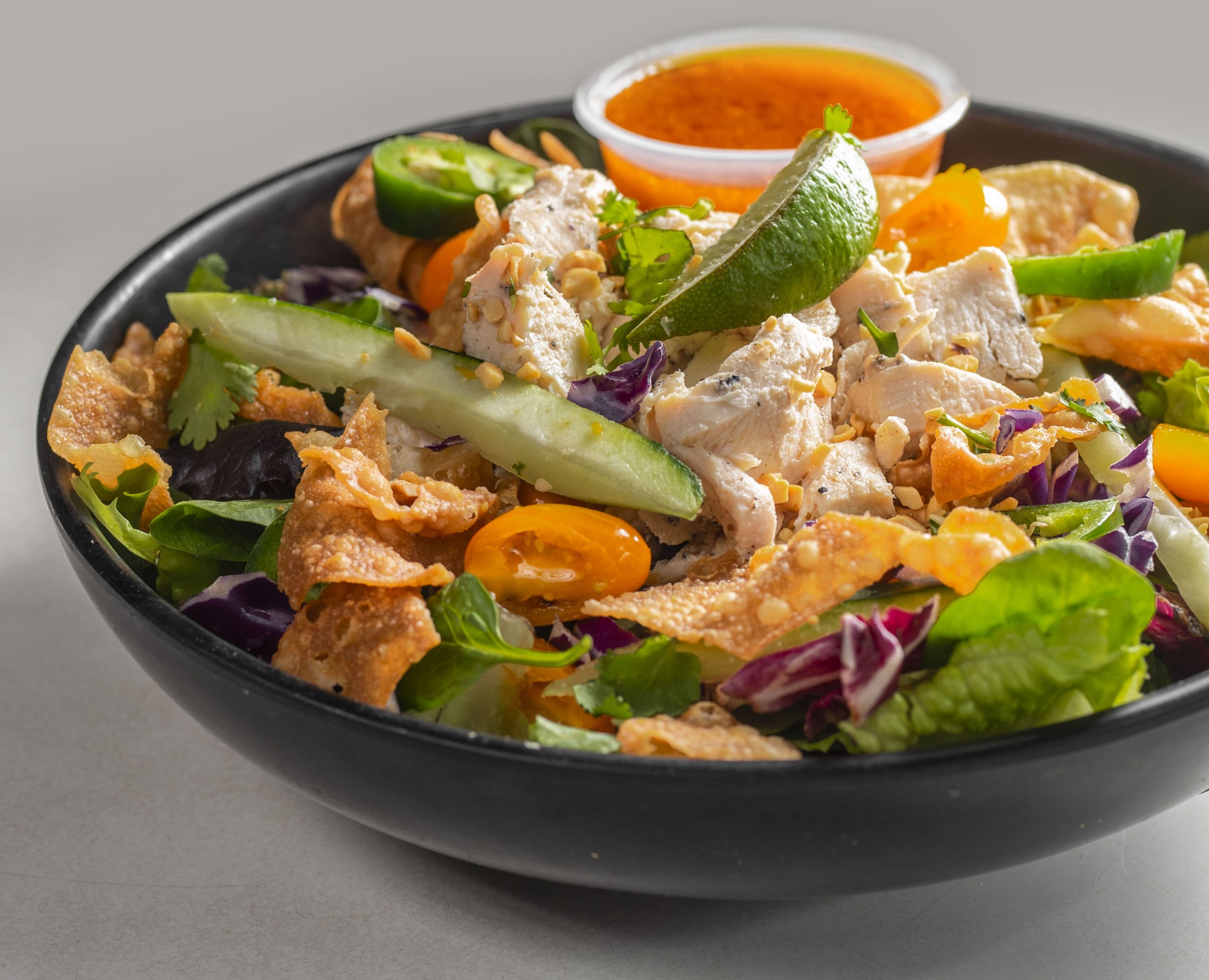 “Honestly, I like the plated salads that we do at Big Orange, Heights Taco and Local Lime,” he says. “The ZAZA salads I have just eaten a thousand times, you know? And, I’m in ZAZA a lot, so I never make a salad off of the menu. I always just grab. I get the lemon-garlic vinaigrette, and I get greens. I just get, like, all of the vegetables.”

Salads served at places like McGehee’s, U.S. Pizza and any self-respecting steakhouse have helped me understand how great a dish like that can be. They balance the compulsion I have to eat things that are bad for me as a kind of menu methadone. And my natural curiosity has led me to some great finds among the sprouts, helping me develop greener appetites — dare I say, even favorites.

But know this: I’ll be danged if I go near that quinoa. There are some lines in every man’s life he should simply never cross. 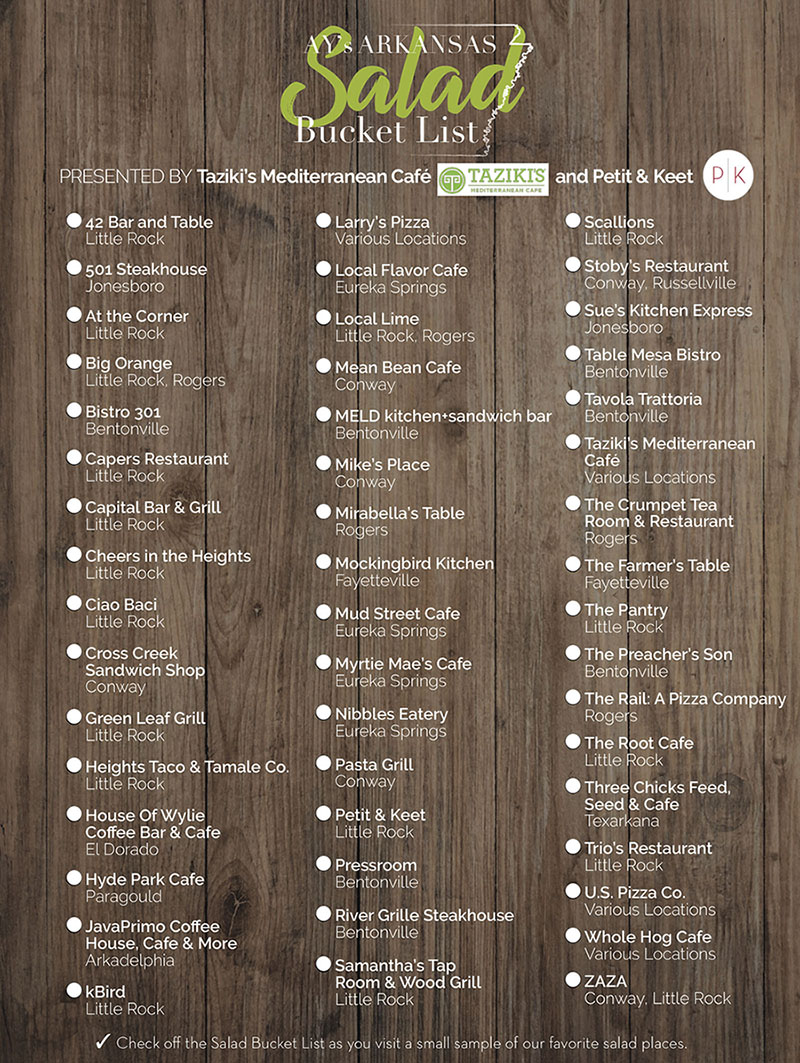