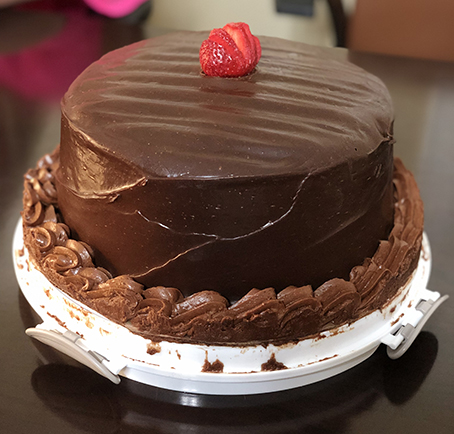 It’s a hard life eating delicious cake and judging them, but someone has to do it! Fortunately, for the “Heather and Lisa Eat Cake Because It’s Heather’s Birthday” contest, the task is split up between AY Publisher Heather Baker and AY Editor-at-Large Lisa Fischer.

And they’ve been hard at work, tasting cakes from around the Natural State in preparation for Baker’s birthday later in September.  “We’ve had the best time with people coming in from all over the state to try their cakes,” Fischer says. “You know people at other offices are asking, “How can I start a program like that?’”

So far, the pair has made it through six cakes, and the latest is a doozy from one of the most celebrated chefs in Arkansas. It’s not every day that Jamie McAfee whips up a birthday cake for you. McAfee is the chef at the Pine Bluff Country Club and an instructor at Pulaski Technical College, as well as a Diamond Chef Arkansas competitor.

“He actually teaches all of the other chefs. He taught all the chefs how to compete in the [Diamond Chef] competition,” Baker says.

For the contest, McAfee has whipped up a three-layer dark chocolate cake that has pudding in the middle with a brandy-infused chocolate ganache. The dark, oozy icing makes lifting the lid from the cake container a challenge.

“I love dark chocolate cake. This is like a masterpiece,” Baker says.

But before Baker takes a bite, she stops to praise McAfee’s other culinary creations, in particular his fried pimento cheese with jelly on top. “He makes the best pimento cheese I’ve ever had in my entire life,” she says.

Back to the cake! Baker and Fischer ready themselves with two slabs of the chocolate cake and stab their forks into it. Both are immediately bowled over.

“It tastes like when you get a big piece of Godiva milk chocolate, and you bite into it,” Baker says. “It’s pretty spectacular.”

“This is the best chocolate cake I’ve ever had,” Fischer says. “It is dense with a moistness – it’s a really beautiful cake.”

In fact, the cake makes Fischer reconsider McAfee. She says McAfee is known for his entrees, but baking could be his calling. “Jamie is a professional. At the Pine Bluff Country Club, he is known more for his savory dishes and entrees, but my boy can bake a cake,” Fischer says.

The list of cakes that Baker and Fischer have tasted is getting longer, and the judging is getting harder. There’s only three cakes left to taste and judge before the end of the contest.